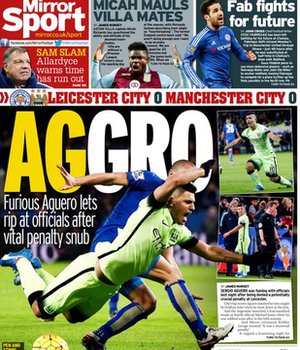 Newcastle boss Steve McClaren is planning a £10m bid for CSKA Moscow's Russia midfielder Alan Dzagoev, 25, as he looks to add more quality to his squad in January. (Daily Mirror)

Barcelona forward Sandro Ramirez, 20, has emerged as a target for Tottenham in January. (Sport - in Spanish)

Manchester City chief executive Ferran Soriano has been in Spain to hold talks over the potential transfer of midfielder Isco, 23, from Real Madrid. (Fichajes - in Spanish)

The Daily Mirror back page

Bamford is seeking to stay in the Premier League despite confirming he wants to leave loan club Crystal Palace. (Times)

Chelsea have made another approach for Juventus midfielder Paul Pogba, 22. (Calciomercato)

Watford striker Odion Ighalo was in a reflective mood after scoring his 30th goal of 2015 on Monday.

Players had to comfort a Tunisian referee after he was reduced to tears after abuse from the crowd. (Metro)

Old Trafford is officially the most boring place to watch football - Manchester United have seen the fewest league goals in English league football so far this season. (Sun)