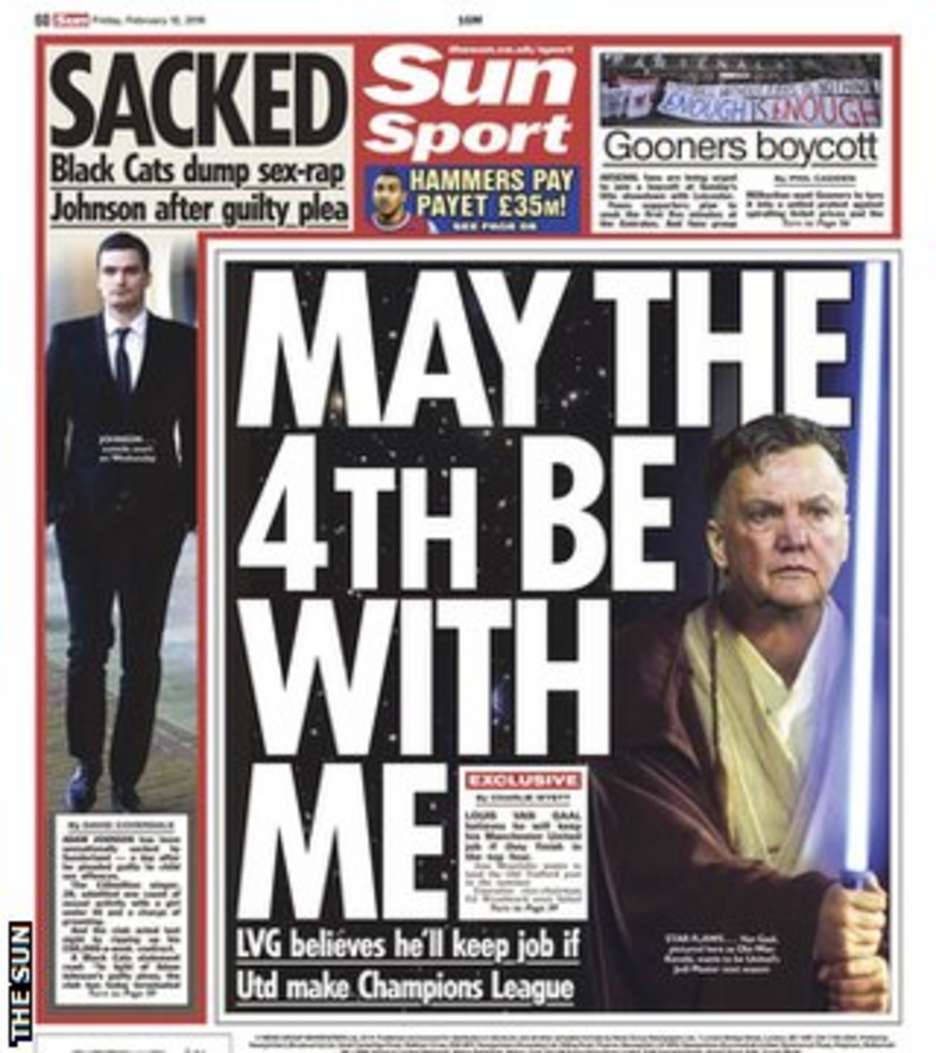 Former England coach Sven-Goran Eriksson believes Wayne Rooney is the next big-money target for China's Super League. The 30-year-old Manchester United striker could be offered £500,000 a week to move to the Far East. (Expressen via Daily Mirror)

Louis van Gaal, 64, believes he will still be Manchester United boss next season if he returns them to the Champions League. (The Sun)

And former Chelsea manager Jose Mourinho, 53, believes he will only get the United job if they finish outside of the top four. (Manchester Evening News)

Real Madrid winger Gareth Bale, 26, and midfielder Luka Modric, 30, will be among Mourinho's targets if he replaces Van Gaal. (Sport - in Spanish)

United investors did not question Ed Woodward on Van Gaal's position - or his team's performances - during a conference call with the club's executive vice chairman. (Guardian)

Tottenham are in advanced talks to sign Marseille's Belgium international striker Michy Batshuayi, 22, who has scored 21 goals in 46 games for the French club. (L'Equipe, via Metro)

Napoli's Gonzalo Higuain rejected a £40m January move to Chelsea because the Blues would not guarantee the 28-year-old would be their first-choice striker. (Daily Mail)

Liverpool have made Barcelona's Marc-Andre ter Stegen, 23, their first choice as they seek a new goalkeeper but have also expressed an interest in Mainz's Loris Karius, 22. (Bleacherreport.com)

Former Arsenal defender Emmanuel Eboue, 32, has been told he must prove his fitness to earn a contract at Sunderland. (Newcastle Chronicle)

Former Liverpool midfielder Jan Molby says the next step for protesting fans is to secure a cap on away-ticket prices in the Premier League. (Liverpool Echo)

Leeds are threatening legal action after an advert criticising owner Massimo Cellino was placed outside Elland Road by a fans' group. (Yorkshire Post)

Everton manager Roberto Martinez presented the club's goal of the month award for January to nine-year-old fan George Shaw, who has cerebral palsy, for his half-time effort during the match against Swansea.

Former Barcelona defender Carlos Puyol was pictured alongside Bojan Krkic as the forward signed a new four-and-a-half-year contract at Stoke. Puyol, his fellow Spaniard's agent, tweeted: "Thank you for your confidence, happy to follow this path together."

Burnley midfielder Joey Barton revealed a sporting ambition as hetweeted:"Looks some golf course this Pebble Beach. Love to have a go in this Pro-Am someday."

Everton's Bryan Oviedo posted a training-ground picture accompanied by an inspiring motto in both English and Spanish.

A five-year-old Blackburn fan who was broken-hearted by striker Jordan Rhodes' sale to Middlesbrough met his hero thanks to a Boro supporters' group. (Lancashire Telegraph)

A Leicester fan plans to buy a racehorse and name it Vardyavinaparty if he wins big with the bookmakers on Saturday. (Daily Express)