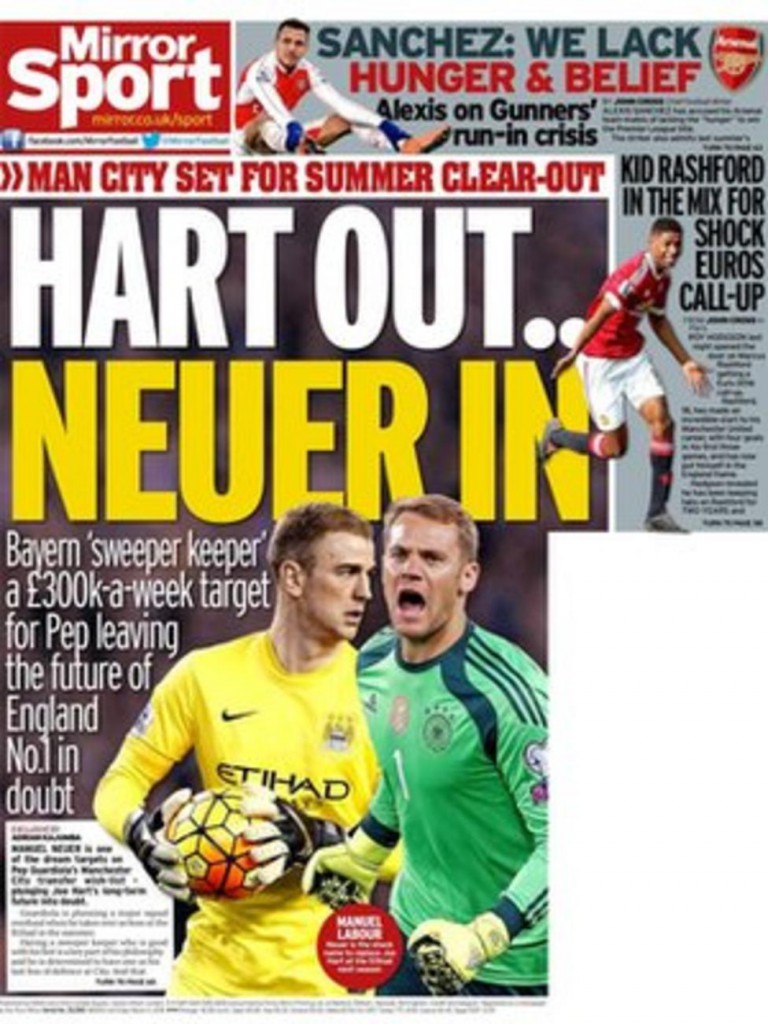 England goalkeeper Joe Hart's future at Manchester City could be in doubt with the club's future manager Pep Guardiola keen to bring Germany international Manuel Neuer, 29, with him from Bayern Munich.(Daily Mirror)

Arsenal, Barcelona and Juventus are interested in Borussia Dortmund's Germany midfielder Ilkay Gundogan, but the 25-year-old is keen to move to Manchester City to work with Pep Guardiola. (Daily Mail)

Newcastle's senior players expect manager Steve McClaren to be sacked if they lose at home to Bournemouth on Saturday. (Daily Mail)

Sunderland will sign former Arsenal right-back Emmanuel Eboue, who has been a free agent since leaving Galatasaray last summer, until the end of the season following the 32-year-old Ivorian's trial at the club. (Sunderland Echo)

Chelsea and Manchester United have been linked with AC Milan striker Carlos Bacca, 29, but the Colombia international's agent says he is happy in Italy. (Daily Express)

Turkish side Galatasaray have denied they have received an offer from Tottenham for 29-year-old Uruguay goalkeeper Fernando Muslera.(Galatasaray FC, via London Evening Standard)

Liverpool defender Jon Flanagan says his uncompromising challenge on former Reds team-mate Raheem Sterling in his side's win over Manchester City on Wednesday "was something I had to do to get the crowd up".(Liverpool Echo)

The American sports executive who spoke to the 'big five' say they would make more money if guaranteed qualification for a revamped Champions League - a concept that could exclude clubs such as current Premier League leaders Leicester. (Sirius XM Radio, via Times - subscription required)

Manchester United's Uruguayan defender Guillermo Varela says he asked to leave the club in January but the 22-year-old was asked to stay by manager Louis van Gaal.(Urugol, via Metro)

West Ham playmaker Dimitri Payet won the Premier League player of the year award at the London Football Awards on Thursday and the Hammers could not resist a cheeky dig at Arsenal. The Upton Park club tweeted:"So it's official, @dimpayet17 is better than @MesutOzil1088."

Everton hope to have bedrooms built at their Finch Farm training complex by the start of next season as they provide facilities for the players to rest and recuperate. (Liverpool Echo)