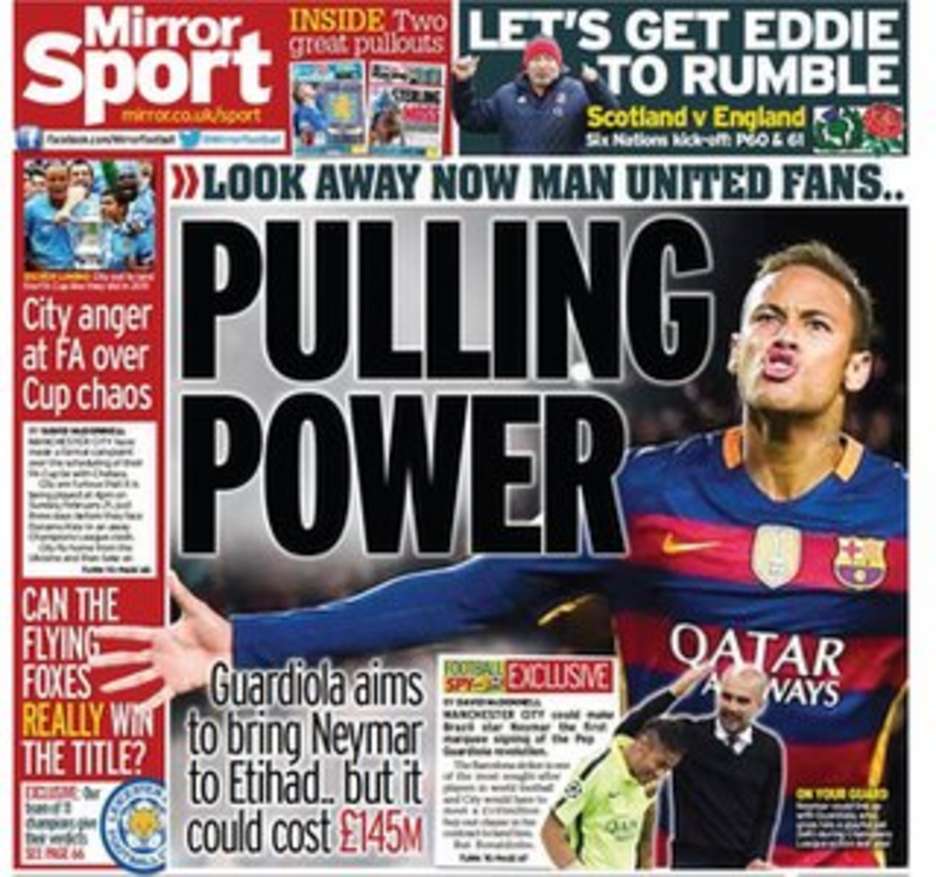 Manchester City can make Barcelona forward Neymar, 24, the first marquee signing of the Pep Guardiola era, but would need to meet the £145m buyout clause in his contract. (Daily Mirror)

Chelsea have held talks with Italy coach Antonio Conte, 46, as they look for a successor to interim boss Guus Hiddink.(Daily Express)

Blues captain John Terry, 35, believes the club should offer him a new deal even though they have no permanent manager in place. (Sun)

Chelsea midfielder Eden Hazard, 25, sent a text to former Blues boss Jose Mourinho to say he was "sorry" on the day the Portuguese was sacked from Stamford Bridge.(Guardian)

Manchester United boss Louis van Gaal says he disagrees with captain Wayne Rooney, 30, and midfielder Jesse Lingard, 23, after they claimed the Dutchman has allowed them to play with more freedom.(Manchester Evening News)

Watford's Nigerian striker Odion Ighalo, 26, says he rejected a move to China because "God said it was not for me".(Daily Mail)

Borussia Monchengladbach midfielder Granit Xhaka, 23, linked with Liverpool, says he dreams of a move to the Premier League. (Daily Star)

Watford captain Troy Deeney, 27, says serving almost three months in prison in 2012 was "the best thing that ever happened to me". (Daily Telegraph)

Barkley says he feels confident of scoring in every game after moving into double figures for the season. (Liverpool Echo)

The publicity drive around Ryan Reynolds' new comic-book movie Deadpool has seeped into the football sphere. Manchester United tweeted this slightly unnerving picture of the superhero kissing the forehead of Wayne Rooney.

Arsenal and Wales midfielder Aaron Ramsey recorded a good-luck message for his rugby union counterparts before the opening weekend of the Six Nations. (Facebook)

West Ham's Boleyn Ground, which the club will leave at the end of the season, will be the setting for a Hollywood action movie before the site is redeveloped.(London Evening Standard)