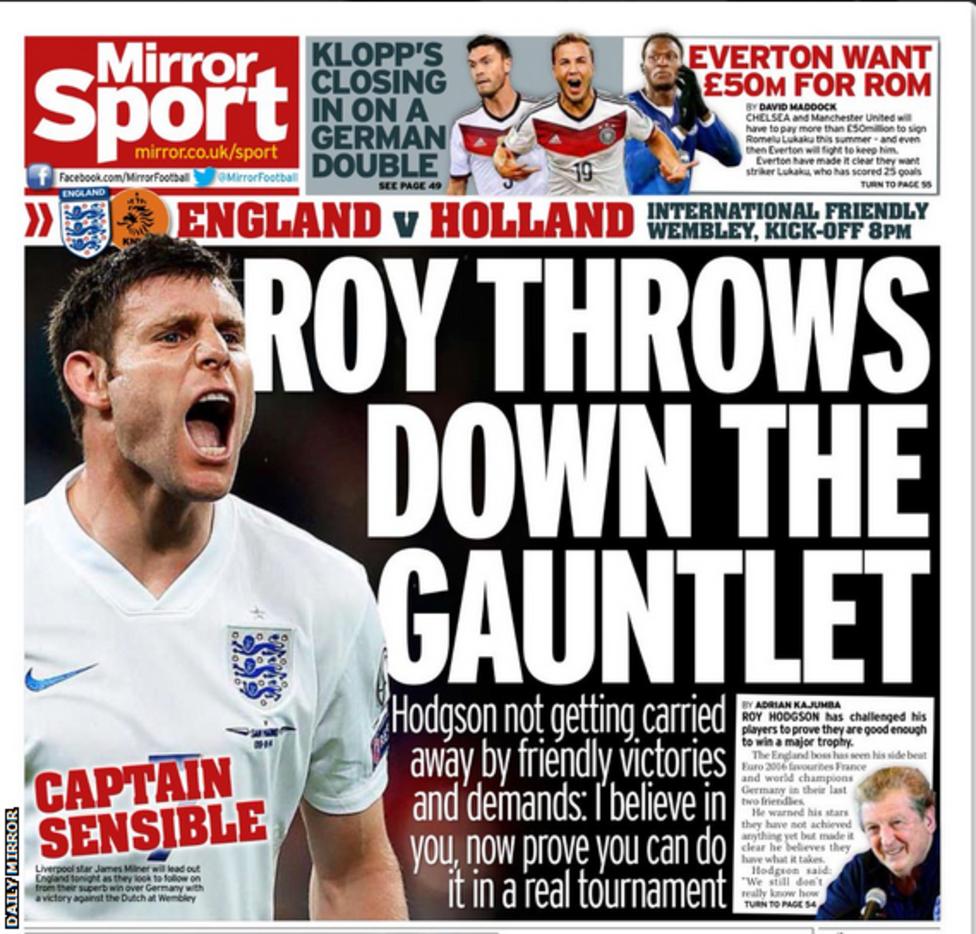 Tottenham Hotspur are considering a move for Bournemouth winger Matt Ritchie, 26, in the summer. (Sun)

England striker Wayne Rooney, 30, may have less than a month to prove his fitness to manager Roy Hodgson as he bids to return to Manchester United's starting line-up on 16 April against Aston Villa following a knee injury.(Guardian)

West Ham co-owner David Sullivan says he wants to sign Paris St-Germain forward Zlatan Ibrahimovic, 34, who is out of contract this summer. (Talksport)

Manchester City and Liverpool are ready to double 23-year-old Barcelona goalkeeper Marc-Andre ter Stegen's wages but will have to pay his £63m release clause. (Sun)

Arsenal manager Arsene Wenger, 66, says he has no plans to leave during the summer despite unrest among some Gunners fans. (Bein Sports)

Manchester United defender Marcos Rojo, 26, plans to return to his native Argentina to play for Estudiantes when his contract expires in 2019. (TyC Sports, via Manchester Evening News)

The Red Devils and Chelsea will have to pay more than £50m if they want to sign Everton striker Romelu Lukaku, 22, this summer. (Daily Mirror)

Former Liverpool striker John Aldridge says watching Dele Alli, 19, perform so well for Tottenham is "hard to take" after the Anfield club missed out on the midfielder's signing. (Liverpool Echo)

Newcastle winger Andros Townsend, 24, wants the club's players to perform to their potential in the last eight Premier League games of the season in order to keep Rafa Benitez, described as "one of the best managers", at the club.(Chronicle)

Sunderland will demand almost £6m for midfielder Emanuele Giaccherini, 30, this summer. The Italy international - on loan at Bologna - has made just 18 Premier League starts since joining in July 2013. (Northern Echo)

Barcelona's famous Nou Camp could be renamed the Johan Cruyff Stadium in honour of the club's former player and manager, who died last week. (Sport via Daily Mail)

West Bromwich Albion defender Gareth McAuley, 36, who is out of contract in the summer, is discussing extending his five-year stay.(Birmingham Mail)

American sportswear giant Nike face a backlash when England unveil their new home strip in Tuesday's friendly against the Netherlands, after criticism of their new away strip worn in the win over Germany. (Independent)

Southampton manager Ronald Koeman will be offered a five-year deal to keep him at the club. The Dutchman has just one year left on his current deal at St Mary's. (Daily Mirror)

Sentiment will not be enough to lure former Nottingham Forest player Martin O'Neill, 64, back to the City Ground as manager, according to former Reds star Kenny Burns. (Nottingham Post)

Goalkeeper Jakob Haugaard, 23, is in line to make his Premier League debut for Stoke City at home to Swansea City on Saturday after Jack Butland fractured his ankle on England duty. (Sentinel)

For many, it's the time of year for tucking into Easter eggs but not if you are a footballer. Stoke City's former Barcelona forward Bojan Krkic posted this picture on Twitter on Monday of him getting to grips with a delicacy from Catalonia. "Having Catalan 'Calcots': green onions, fire grilled, dipped in romesco sauce. Eaten with bare hands," wrote the Spaniard.

A crowd of 35,036 turned up at Upton Park for West Ham United midfielder Mark Noble's testimonial on Monday. Hammers vice-chairman Karren Bradytweeted she was proud of Noble and what he had done for charity, with all proceeds going to Richard House Children's Hospice, Help for Heroes and the DT38 Foundation.

Newcastle United manager Rafael Benitez invited Magpies fan Zoe Ellison to the training ground and presented her with a signed shirt after she tripped and fell at his first match in charge when holding a banner welcoming the former Liverpool and Real Madrid boss to the club.(rafabenitez.com)