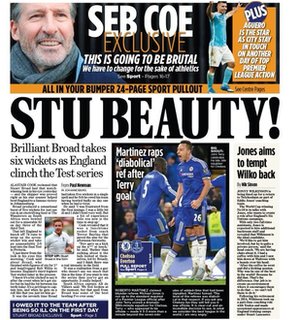 Real Madrid director general Jose Angel Sanchez claims a number of Premier League teams could face transfer bans similar to the one his club were given this week. (Telegraph)

Former Chelsea manager Jose Mourinho believes he will succeed Van Gaal, 64, as United manager within six months, and has sounded out some of his former assistants about joining him at Old Trafford.(Sun)

Mourinho, 52, turned down the chance to return to Real Madrid in order to resume his Premier League career. (Times - subscription required)

The Mail on Sunday leads on Stuart Broad's heroics

Barca are confident of taking Arsenal midfielder Aaron Ramsey to the Nou Camp, and have made signing the 25-year-old one of their summer priorities. (Express)

West Brom are demanding £7m for Callum McManaman, 24, after QPR and Middlesbrough became the latest clubs to register an interest in the winger. (Telegraph)

Sunderland are set to increase their offer for Swansea City's Andre Ayew to £14m after having an initial £11m bid for the 26-year-old striker turned down. (Express)

Former Arsenal and Chelsea defender Ashley Cole is considering an offer from MLS side LA Galaxy after the 35-year-old was bought out of his Roma contract. (LA Times)

The Stamford Bridge side are also looking at Leicester playmaker Riyad Mahrez, 24. (Star)

West Ham are set to bid £10m for Liverpool's Italian striker Mario Balotelli, 25, who is on loan at AC Milan. (Brentwood Gazette)

Swansea are prepared to sack head coach Alan Curtis after the club slipped into Premier League relegation zone less than two weeks after appointing the 61-year-old as full-time successor to Garry Monk. (Sun)

A potential return to Bologna for Southampton midfielder Gaston Ramirez, 25, has hit a snag over the length of contract on offer. (La Gazetta dello Sport)

Singer Ed Sheeran may be taking a self-imposed break from social media, but that didn't stop Newcastle legend and BBC pundit Alan Shearer tweeting a photo of the two of them  at Newcastle's 2-1 win over West Ham on Saturday.

Posters of former manager Jose Mourinho are on sale in Chelsea's club shop for £1 each, a month after the Portuguese left. (Evening Standard)

Newcastle owner Mike Ashley gave away £2.5m of winter jackets from his Sports Direct firm after his side beat West Ham on Saturday. (Mirror)