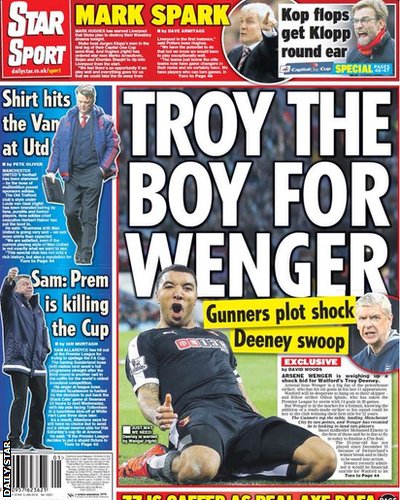 West Ham are willing to sell striker Andy Carroll for £18m, with Sunderland and Newcastle interested in the 26-year-old. (Mirror)

Lokomotiv Moscow striker Oumar Niasse, 25, is set for a move to the Premier League this month, with Chelsea, Manchester United and Tottenham among the clubs interested in signing the £15m-rated Senegal international. (Guardian)

Manchester City have been told Schalke midfielder Leroy Sane, 19, would cost them at least £40m. (Sun)

Leicester City will offer England striker Jamie Vardy a new contract in January that will more than double the 28-year-old's wages. (Mail)

Tuesday's back page of the Daily Star

Midfielder Marouane Fellaini, 28, will not leave Manchester United in the January transfer window, according to manager Louis van Gaal. (Sun)

Stoke boss Mark Hughes has ruled out the prospect of Bojan Krkic leaving Stoke in January, saying there is no buyout clause in the 25-year-old's contract.(Mail)

Former Brazil forward Ronaldinho, 35, has received offers from English clubs, according to his brother and agent.(Times- subscription required)

Arsenal have recalled Germany Under-21 midfielder Serge Gnabry from his loan spell at West Bromwich and will instead loan the 20-year-old to a Championship club. (Telegraph) 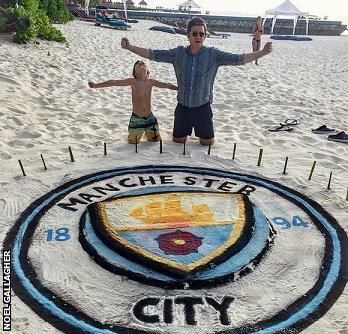 Manchester City fan and musician Noel Gallagher posed with a giant version of the new City badge made out of sand.

David de Gea's new Facebook profile picture  caused some concern among Manchester United fans, as it shows an illustration of the Spain goalkeeper in a green kit without the Red Devils' badge.

Ex-West Ham defender Rio Ferdinand revealed on Twitter  that he has been asked to play at Upton Park one last time - for Mark Noble's testimonial at Upton Park. "Such a special place, special fans," he wrote.

Leicester new signing Demarai Graytweeted  his thanks to fans following his £3.7m move from Birmingham City.

Finally, 50 years on, it has been proven that Geoff Hurst's second goal for England against West Germany in the 1966 World Cup final did cross the line. (Sky Sports)