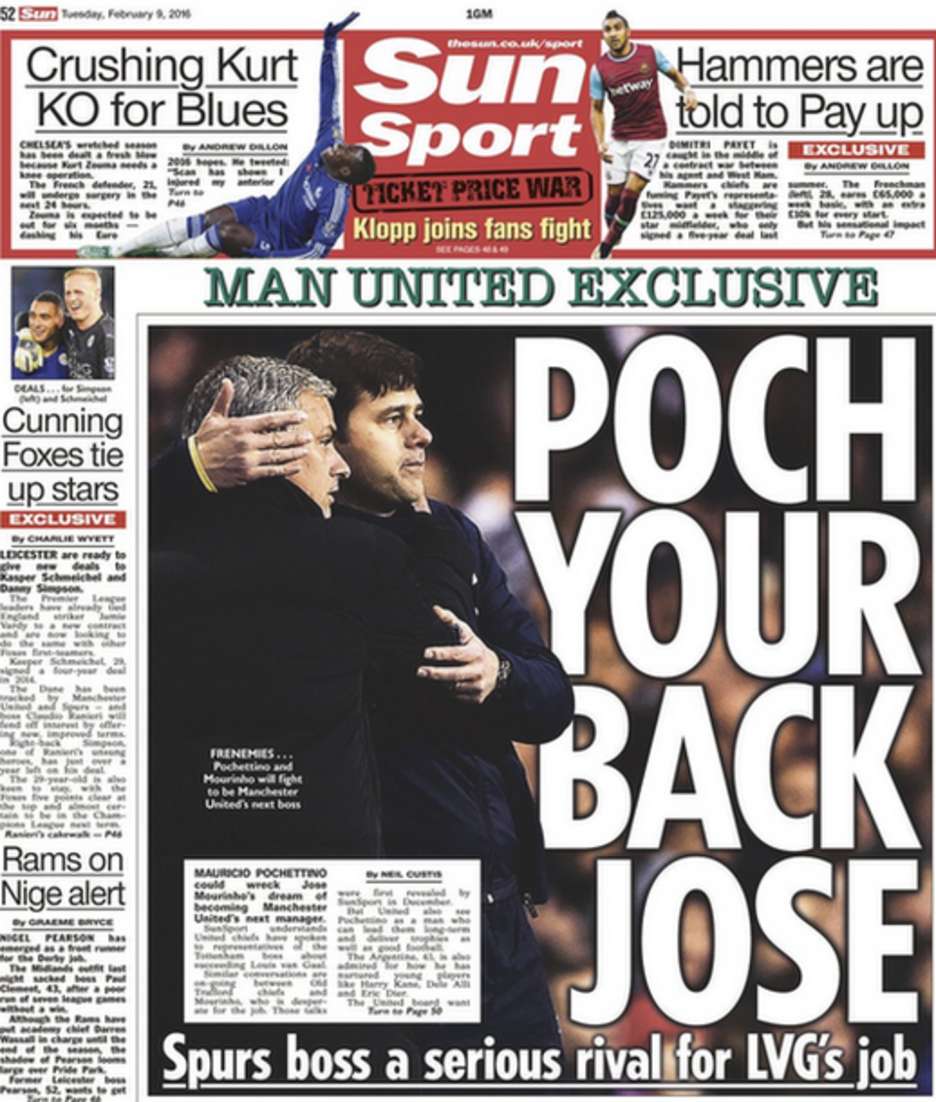 Liverpool striker Mario Balotelli, 25, will return to Anfield as AC Milan do not want to sign him permanently when his loan expires at the end of the season.(Calciomercato.com)

Chelsea have been told to forget about appointing Juventus boss Massimiliano Allegri as their new manager in the summer.(London Evening Standard)

Birmingham City boss Gary Rowett, 41, is in the frame to be the next Derby County boss following Paul Clement's sacking on Monday. (Birmingham Mail)

Aston Villa, eight points from safety with 13 games to go, have warned staff of likely redundancies if they are relegated from the Premier League. (Daily Mirror)

Former Liverpool manager Brendan Rodgers, 43, says he has turned down five jobs - three in the Premier League - since being sacked at Anfield four months ago. (Liverpool Echo via beIN Sports)

Meanwhile, the Baggies have dismissed reports that Tottenham Hotspur will be given first refusal on striker Saido Berahino, 22, in the summer.(Express & Star)

Former Leicester City boss Peter Taylor says 25-year-old midfielder Danny Drinkwater, who has played in 23 of the Premier League leaders' 25 games, should be in contention for an England place at Euro 2016. (Talksport)

Ronald Koeman will speak to midfielder Victor Wanyama, 24, about his disciplinary record after the Kenya international's third red card of the season. (Southern Daily Echo)

Former Sunderland manager Paolo di Canio, 47, has applied for the Rotherham job after Neil Redfearn was sacked by the Championship strugglers on Monday. (Press Association Sport via Guardian)

Meanwhile, Redfearn is favourite to take over at League One club Barnsley. (Sheffield Star)

Manchester United's Belgium striker Adnan Januzaj, 21, and Uruguay-born defender Guillermo Varela, 22, were injured during an Under-21 game in front of manager Louis van Gaal at Old Trafford on Monday.(Daily Mirror)

Birmingham City striker Wes Thomas, 29, says his career at St Andrew's is "pretty much over" after joining League One Bradford City on loan. (Telegraph & Argus)

Is this the key to Tottenham defender Toby Alderweireld's excellent form this season? The Belgium centre-back celebrated his club moving up to second in the Premier League table by dressing up in overalls and running around in a wood. Each to their own.

Manchester United midfielder Morgan Schneiderlin tweeted his support to countryman Kurt Zouma after Chelsea's France defender was ruled out for six months. It was against United on Sunday that Zouma suffered a serious knee injury.

Stoke City's Scotland midfielder Charlie Adam had only one word to sum up the Scottish Cup quarter-final draw after one of the balls opened forcing a re-draw. "Shambles," he wrote on Twitter.

Meanwhile, League Two Hartlepool United had some fun at the expense of the Scottish Cup draw going wrong...

What the? Surely this isn't the diet expected of a Premier League footballer? Liverpool defender Dejan Lovren posted this photo on his Twitter page with the following caption: "A big THANK YOU to my fans in South Korea. Great to see how much love and support I have from there." Right then, that's that explained.

Former Derby County midfielder Robbie Savage wants to know what is going on at his old club after the Championship's fifth-placed team sacked manager Paul Clement on Monday.

New Bristol City manager Lee Johnson says he will cheer on Barnsley - the club he left 36 hours after steering them to the Johnstone's Paint Trophy final - at Wembley on 3 April. (Yorkshire Post)