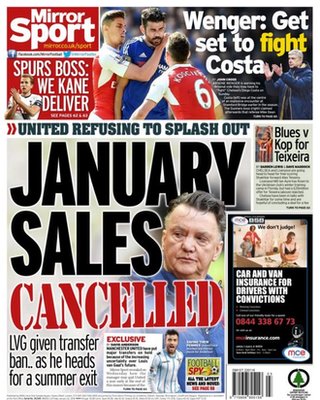 Manchester United have put their major transfers on hold because of the increasing uncertainty over Louis van Gaal's future as manager.(Daily Mirror)

Alexandre Pato's agent has confirmed that four clubs - including Chelsea and Liverpool - have a chance of signing the 26-year-old Brazil striker, but insisted that no official bids have yet been made. (UOL Esporte, via London Evening Standard)

The Mirror report that Manchester United have abandoned their transfer plans

Tottenham have the first option to re-sign Wales forward Gareth Bale, 26, should he be sold by Real Madrid - according to a leaked document. (Daily Mirror)

Defender Branislav Ivanovic, 31, is set to sign a new one-year contract at Chelsea, in a deal which will match his current wage of £120,000-a-week and has the option of a further year. (Daily Express)

But midfielder Nemanja Matic is debating his future at Stamford Bridge and may choose to leave the Blues after a recent dip in form. (Daily Mail) 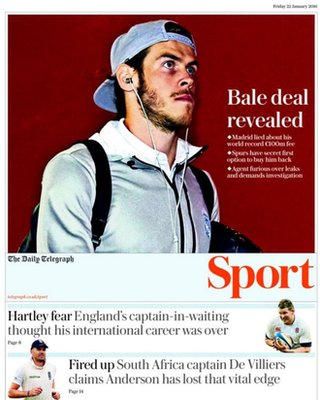 United are considering ending their interest in Lazio's Felipe Anderson as they are put off by the 22-year-old Brazil midfielder's price tag and recent form.(Bleacher Report)

Former Brazil international Ronaldinho, 35, says he has no plans to retire and will look for a new club after celebrating the Rio carnival in February. (Goal.com)

Fernando Torres could soon be the highest paid player in the world, with eight offers on the table according to his agent. The 31-year-old Spain striker is on loan at Atletico Madrid from AC Milan. (Sun)

Newcastle look likely to end their interest in Andros Townsend after Tottenham refused to lower their £14m valuation of the 24-year-old England winger. (Guardian)

Sunderland manager Sam Allardyce has revealed he is looking for two outfield players and a goalkeeper, but refused to confirm whether he wants to sign Swansea striker Andre Ayew, 26. (Chronicle Live)

Former Nottingham Forest boss Stuart Pearce has not spoken to Bristol City about the Championship side's managerial vacancy, despite being heavily linked with the role. (Talksport) 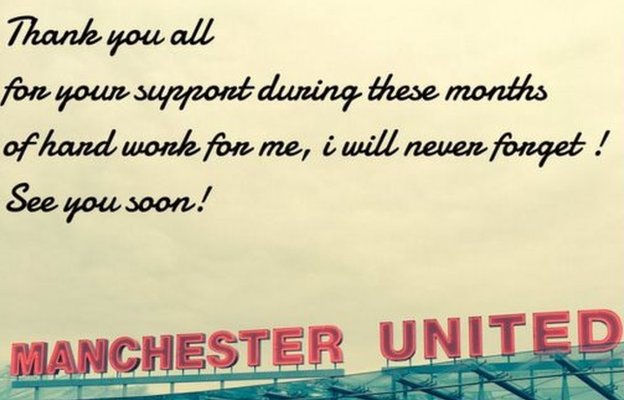 Manchester United goalkeeper Victor Valdes, 34, posted a message to his followers on Instagram, as he looks set to leave the club on loan.

United number one David de Gea, 25, tweeted a message of support to Valdes, saying : "We learn a lot from the best. Good luck my friend in this new stage."

Fenerbahce striker Emmanuel Emenike, 28, fuelled speculation about a switch to West Ham after he posted a screenshot from Green Street on Instagram - a film which features a firm of Hammers fans.

Wayne Rooney took charge of Manchester United's half-time team-talk in the game against Liverpool, in which he scored the late winner. The home dressing room reportedly heard shouting across the corridor at Anfield. (Sun)