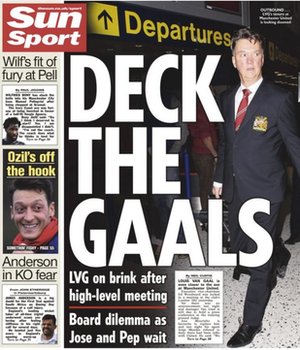 Jose Mourinho's agent denies a deal has been agreed for the former Chelsea boss to replace Louis van Gaal at Manchester United.(Globoesporte - in Portuguese)

Van Gaal is getting closer to the sack, with executive vice-chairman Ed Woodward spending Tuesday in a meeting at the club's London headquarters. (Sun)

Ex-Norway striker and German television pundit Jan Age Fjortoft believes Van Gaal will be sacked and replaced by assistant Ryan Giggs in the next few days, possibly even before Christmas. (BBC Radio 5 live)

Leicester striker Jamie Vardy, 28, has been the subject of a tentative inquiry from Manchester City, but Chelsea's interest is more solid.(Daily Telegraph)

Everton are set to be taken over by an American-led consortium within the next six weeks. (Times - subscription required) 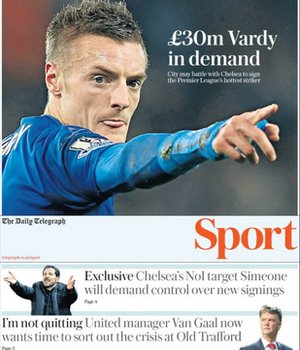 Arsenal are hoping 27-year-old attacking midfielder Mesut Ozil will commit to a long-term deal, which will surpass his current £140,000-a-week contract which runs until 2018. (Daily Mail)

But French midfielder Mathieu Flamini, 31, is set to leave the Emirates when his deal expires in the summer despite having never lost a league game at home. (Mirror)

Former England, Chelsea and Arsenal left-back Ashley Cole is set to join LA Galaxy. The 35-year-old is a free agent after being released by Roma. (Sun)

Defender Joel Matip, 24, is closing in on a move to Liverpool after rejecting a contract offer from Schalke. (Bild - in German)

Midfielder Steve Sidwell, 33, is expected to leave Stoke in January after falling out of favour under manager Mark Hughes. (Talksport)

Real Madrid star Cristiano Ronaldo, 30, has given his Twitter followers  a look around his £4.8m mansion, which has seven bedrooms, a swimming pool and mini football pitch.

Southampton tweeted a picture  of goalkeeper Fraser Forster, 27, on his return to full training after nine months out with a knee injury.

"Omar, you are my new signing."

The force was strong at Mexican side CF Pachuca after they unveiled their new signing, 6ft 5in defender Omar Gonzalez, in a Darth Vader costume. The 27-year-old - signed from LA Galaxy, far, far away - was complete with lightsaber. (101 great goals)