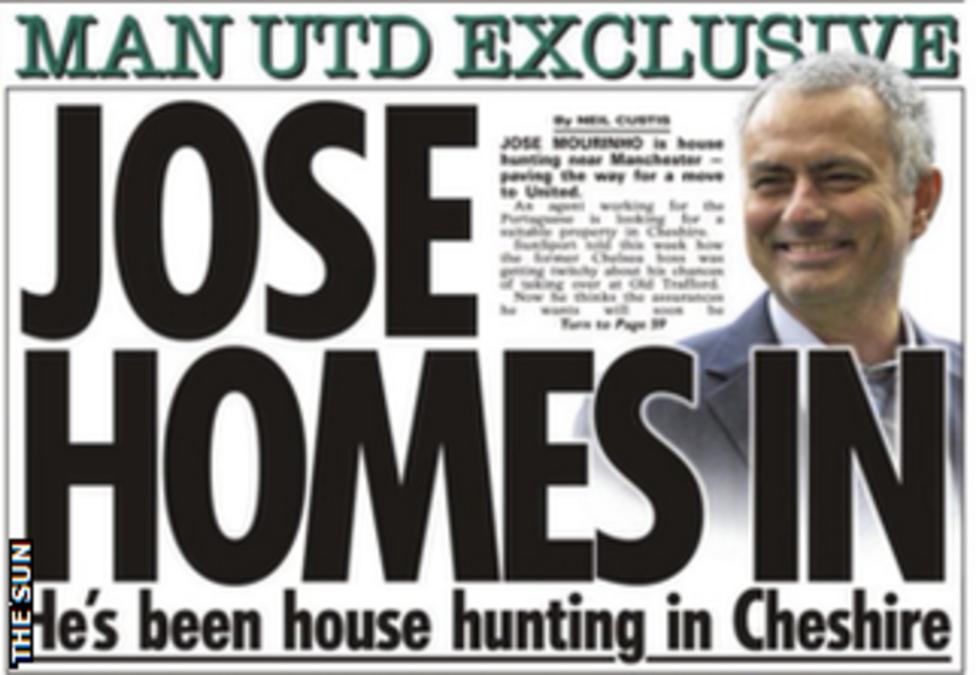 Manchester United could miss out on Paris St-Germain forward Zlatan Ibrahimovic, 34, when his contract expires in the summer - if they keep manager Louis van Gaal. (Telegraph)

Former Chelsea boss Jose Mourinho, 53, has started looking for a house in Cheshire as he prepares for life as United manager. (Sun)

But Real Madrid will try to take Mourinho back to the Bernabeu should they be eliminated from the Champions League. (Mirror)

Chelsea striker Diego Costa, 27, is prepared to consider a move to China if Atletico Madrid cannot afford to take him back to Spain this summer.(Telegraph)

But midfielder Eden Hazard, 25, is set to be the first casualty of the Italian's tenure. (Sun)

Tottenham are to offer boss Mauricio Pochettino a club-record £5.5m-a-year deal as they try to keep him at White Hart Lane. (Mail)

West Bromwich Albion manager Tony Pulis is expected to speak to chairman Jeremy Peace in the summer about a new contract. (Mail)

Manchester City captain Vincent Kompany, 29, could play in his side's Champions League quarter-final second leg against Paris St-Germain next Tuesday after missing the past three games with a calf injury. (Manchester Evening News)

Stoke City and Republic of Ireland forward Jon Walters, 32, will play in a testimonial for team-mate Andy Wilkinson on 17 May as part of his Euro 2016 build-up. (Sentinel)

European Cup winner Garry Birtles says former team Nottingham Forest are in a mess on and off the pitch. (Nottingham Evening Post)

Wolves midfielder Kevin McDonald, 27, could be set to leave after falling out of favour and training with the club's under-18 side. (Express & Star)

Borussia Dortmund tweeted this picture of Liverpool fans in the city before their Europa League quarter-final first leg on Thursday, which ended 1-1. Liverpool were allocated 3,400 tickets for the match but more supporters are thought to have travelled for Jurgen Klopp's reunion with his former club.

Klopp turned down a gift - a replica of the famous square where Borussia Dortmund parade their silverware - from his biggest fan before Thursday's match. (Liverpool Echo)