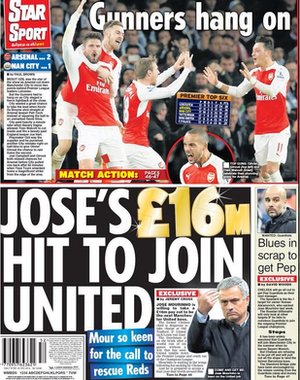 United held informal talks with representatives of Mourinho last week to gauge whether the Portuguese would want to succeed current boss Louis van Gaal, who is under pressure after his side failed to win any of their last six games. (Times - subscription required)

Van Gaal will have extra security if he is still in charge of the club when the Red Devils face Chelsea at home on 28 December. (Sun)

Chelsea owner Roman Abramovich has told outgoing Bayern Munich manager Pep Guardiola he will give him anything he wants in a bid to lure him to Stamford Bridge in the summer. (Sun)

Abramovich is planning to make Guardiola the world's highest-paid manager and will also fund a massive overhaul of the Blues' playing staff. (Daily Mail)

Midfielder Marko Grujic, 19, has agreed a five-year contract with Liverpool ahead of completing a £5m move from Red Star Belgrade. (Liverpool Echo)

Liverpool and Everton are watching Marseille captain Steve Mandanda, with the 30-year-old keeper considering a move to the Premier League. (Canal+, via TalkSport) 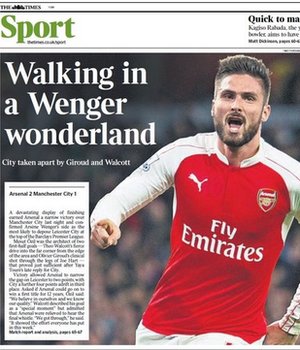 Riyad Mahrez, 24, is likely to stay at Leicester in January according to his agent, despite interest from other Premier League clubs including Manchester United. (Sky Sports)

Tottenham are preparing another attempt to bring West Bromwich Albion striker Saido Berahino to White Hart Lane. The 22-year-old was the subject of a £23m bid by the London club in the summer. (Telegraph)

Tottenham will look to sign Valencia's former Manchester City striker Alvaro Negredo, 30, if they fail to revive a deal for Berahino. (Daily Mail)

Arsenal's players celebrated their win over Manchester City on Twitter. Mesut Ozil, who provided both assists in his side's 2-1 victory on Monday, expressed himself through emojis.

Meanwhile, Arsenal midfielder Aaron Ramsey tweeted his thanks  to the home fans. The 24-year-old Wales international wrote: "Brilliant performance by the boys tonight. Had to dig deep in the end and with your help we got through. Have a good Christmas!".

Manchester United's squad paid a Christmas visit to local hospitals to visit young patients. Defender Daley Blind tweeted a picture of himself posing with a fan, saying: "Great to give some children a big smile on their faces today".

Tottenham's players have been playing Secret Santa by choosing a Christmas present for one of their team-mates and defender Jan Vertonghen cheekily suggested he would get young midfielder Dele Alli a girlfriend. (Spurs TV)