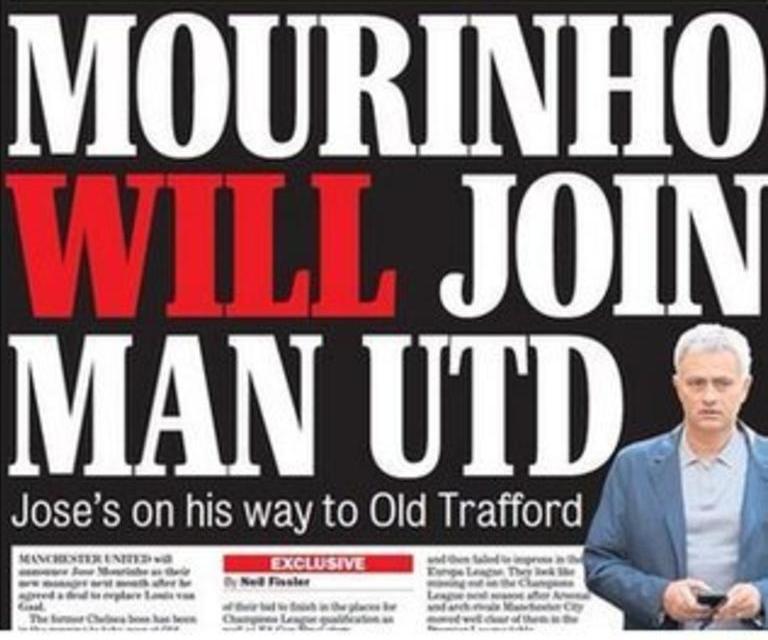 Former Chelsea boss Jose Mourinho has signed a deal to replace Louis van Gaal at Manchester United this summer and it will be announced in the next couple of weeks. (Sunday Express)

United boss Van Gaal has admitted his future is in the hands of the board and has hinted there will be talks with them at the end of the season. (Manchester Evening News)

The Dutchman says that winning the FA Cup might not be enough to save his job. (Sun)

Manchester City striker Stevan Jovetic, 26, who is currently on loan at Inter Milan, is a transfer target for new Chelsea boss Antonio Conte. (Star on Sunday)

Leicester City goalkeeper Kasper Schmeichel, 29, is a £15m target for Barcelona this summer to replace Marc-Andre ter Stegen, who is leaving the Nou Camp. (Sun)

Tottenham have made a £16m bid for Lille winger Sofiane Boufal, 22, who is also a target for Manchester United, Chelsea and Arsenal. (Sunday Express via Foot Mercato)

The North London club look set to sign Lyon striker Alexandre Lacazette, 24, in a £23.5m deal at the end of the season. (Sunday Mirror)

Liverpool defender Mamadou Sakho, 26, could miss Euro 2016 in his native France this summer and may not be available to Jurgen Klopp until October after failing a drugs test.(Sun on Sunday)

Aston Villa head of recruitment Paddy Riley has escaped the sack despite spending £55m on players last summer only to be languishing at the bottom of the Premier League. (Sunday Telegraph)

Captain Vincent Kompany is set to return for Manchester City's Champions League semi-final clash with Real Madrid on Tuesday, but midfielder Yaya Toure is a doubt. (Mail on Sunday)

Liverpool boss Jurgen Klopp cannot understand England's aversion to the Europa League and believes the power of history can guide them to win the trophy. (Guardian)

Watford defender Ben Watson, 30, says FA Cup semi-finals should not be played at Wembley as it "takes a bit of an edge off the final". (Observer)

Arsenal manager Arsene Wenger admits he does not know if winger Theo Walcott, 27, has a long-term future at the club. (Sky Sports)

Sunderland manager Sam Allardyce, 61, says he contemplated retiring after leaving West Ham last summer but it is "not on the horizon" at the moment. (Sunday Telegraph)

Tottenham goalkeeper Hugo Lloris, 29, has revealed that he was close to leaving the North London club before the arrival of head coach Mauricio Pochettino. (Eurosport)

Southampton midfielder Shane Long went on Twitter to tell fans that there was still more to come this season a 3-2 victory at relegated Aston Villa on Saturday.

Meanwhile, United defender Chris Smalling posted on Twitter to thank team-mate Anthony Martial for his late winner after his own goal gave Everton a second-half equaliser at Wembley.

Stoke City forward Bojan Krkic has sent a message of support to team-mate Ibrahim Afellay after he sustained cruciate ligament damage that will keep him out for the long term. He tweeted: "Really down about the injury to my friend & great guy, Afellay. Get yourself fit again soon and come back stronger!"

Former Liverpool striker Djibril Cisse has shown he is a man of many talents after being chosen by pop diva Mariah Carey to be her DJ for a gig in Paris last week.(Sunday Mirror)

Watford's last FA Cup semi-final hero George Reilly has turned down an invitation to watch his former club at Wembley today and will instead view the game with Crystal Palace from his local pub.(Mail on Sunday)