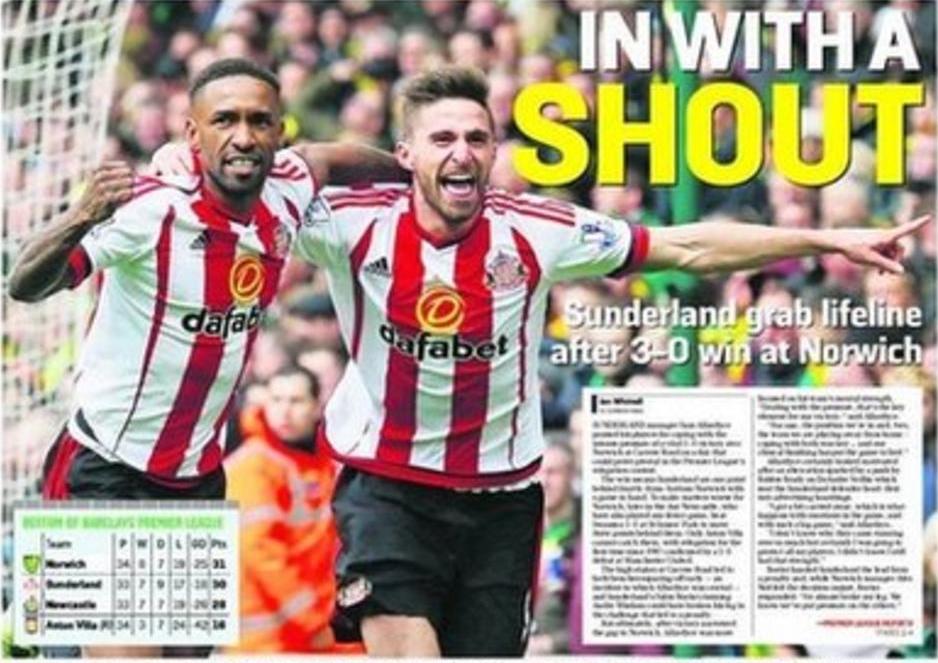 Jose Mourinho is confident he will be Manchester United manager next season and has lined up a £70m move for Napoli's Argentine striker Gonzalo Higuain, 28. (Sunday People)

Brazil forward Alexandre Pato, 26, would like to stay at Chelsea once his loan from Corinthians runs out at the end of the season. (ESPN Brasil, via Sunday Express)

Paris St-Germain's Sweden striker Zlatan Ibrahimovic, 34, is in talks with Manchester United over a £600,000-a-week deal. (Corriere dello Sport, via Star on Sunday)

England international Theo Walcott, 27, wants to leave Arsenal after only starting one Premier League game since the end of January.(Sunday Mirror)

Sam Allardyce has told friends he will resign as Sunderland manager if the club are relegated this season and could even announce his retirement.(Sunday Mirror)

The scout who recommended Belgium forward Kevin de Bruyne to Chelsea says he told owner Roman Abramovich the now-Manchester City player, 24, would one day be worth £70m.(Star on Sunday)

England boss Roy Hodgson has told West Ham striker Andy Carroll, 27, he will not be taking him to Euro 2016.(Sunday Mirror)

Leicester have checked on Italian side Pescara's 22-goal striker Gianluca Lapadula, with the Serie B club's president saying the 26-year-old can leave if they do not get promoted. (ITA Sportpress, via Mail on Sunday)

Arsenal are close to signing Borussia Monchengladbach midfielder Granit Xhaka, though a fee has yet to be negotiated for the 23-year-old Switzerland international. The German club want £30m and the Gunners are willing to pay £20m. (Mail on Sunday)

Wenger will also give 20-year-old forward Chuba Akpom a chance at Emirates Stadium next season, with the England Under-21 international impressing on loan at Hull City.(Goal.com)

Tottenham are close to renewing the contracts of 24-year-old midfielders Christian Eriksen and Erik Lamela, as well as defender Jan Vertonghen, 28.(Star on Sunday)

Former Brighton and Sunderland manager Gus Poyet - currently in charge at Greek side AEK Athens but out of contract in the summer - is in the frame to take over at Championship club Nottingham Forest. (Sunday People)

Watford striker Troy Deeney tweeted this picture, complimenting "the main man" Heurelho Gomes as well as "the best kit man in the league".

Brazilian goalkeeper Gomes was all smiles after two penalty saves in Watford's 1-0 win at West Brom, though the same could not be said for the Baggies' spot-kick taker Saido Berahino.

West Brom's own goalkeeper was another impressed by Gomes' performance, despite being on the losing side.

Former Aston Villa defender Carlos Cuellar had a message for the Villa Park fans after the club's relegation to the Championship was confirmed. He tweeted: "Heads up Villans, today is a sad day for all of us. I hope you guys return soon to the Premier League."

Lou Macari, who spent more than a decade at Manchester United, was introduced to current midfielder Bastian Schweinsteiger before their win against Villa. The Scot posted this picture on Twitter.

A cross-party group of MPs wants to see Leicester City manager Claudio Ranieri rewarded for the Foxes' remarkable season with a knighthood.(Sun on Sunday)

Leicester defender Christian Fuchs has revealed that Ranieri came to his birthday party twice, having got the date wrong initially. (Observer)

Marcus Rashford's start to his Manchester United career has attracted interest from Jay Z, with the rapper's Roc Nation Sports company hoping to represent the 18-year-old forward. (Sun on Sunday)