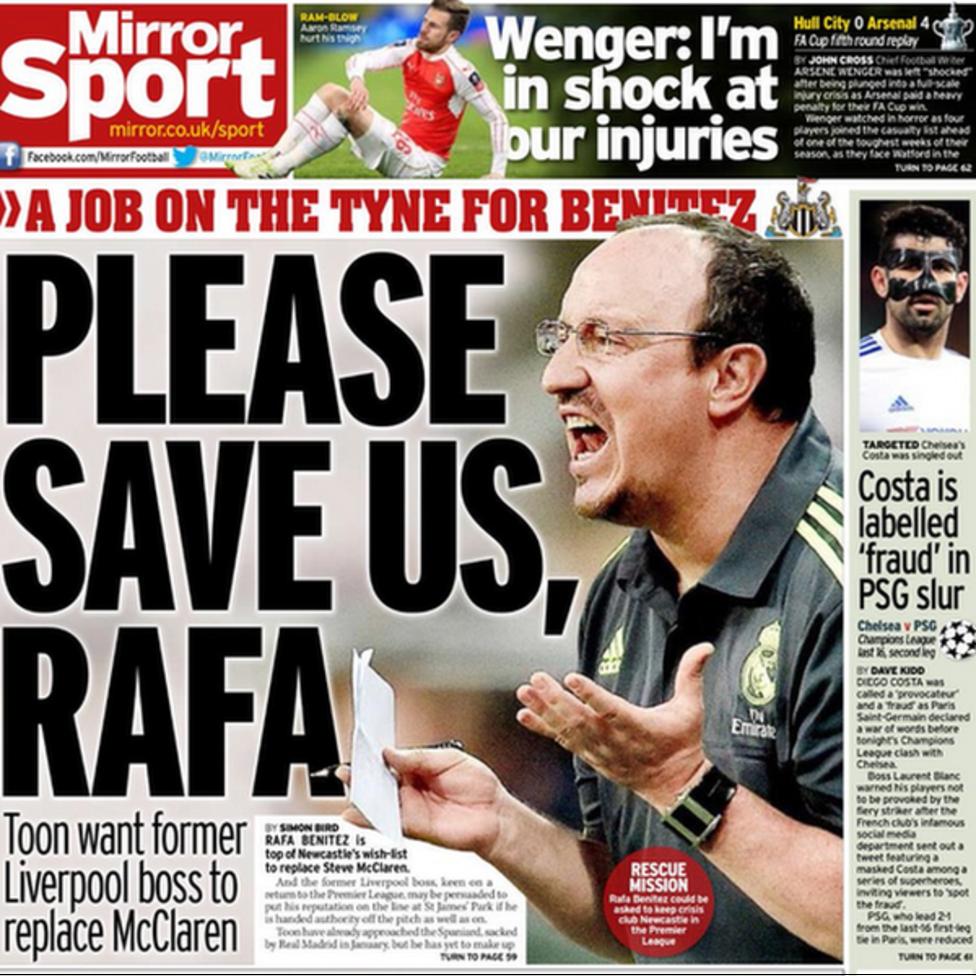 As well as Benitez, former Manchester United manager David Moyes is also being considered as a potential successor to McClaren. (Sky Sports)

Ex-Newcastle striker Micky Quinn says everyone at the club - including the owner, managing director, chief scout, head coach and players - are to blame for their predicament. (Newcastle Chronicle)

Manchester City are already looking at replacements for incoming manager Pep Guardiola - if the Spaniard walks away at the end of his contract in 2019.(Daily Mirror)

Guardiola is set to target Arsenal's England winger Alex Oxlade-Chamberlain, 22, as one of his first signings at City. (Times - subscription required)

But Guardiola will allow striker Wilfried Bony, 27, to leave to the highest bidder in the summer. (Daily Star)

Louis van Gaal is set to stay as Manchester United manager next season to see out his three-year contract at Old Trafford.(Daily Mirror)

Paris St-Germain's Sweden striker Zlatan Ibrahimovic, 34, is so certain he will be signing for Manchester United in the summer that he is already planning for life in the Premier League. (Le Sport 10, via Manchester Evening News)

Borussia Dortmund have told Manchester United, Arsenal and Chelsea that Gabon striker Pierre-Emerick Aubameyang, 26, will not be heading to the Premier League this summer. (Sun)

Leicester midfielder N'Golo Kante, 24, has been called up to the provisional France squad for the upcoming friendlies against the Netherlands and Russia. (Le Parisien, via Leicester Mercury)

England's 1966 World Cup-winning goalkeeper Gordon Banks thinks Roy Hodgson's side cannot win Euro 2016 as they are "little bit behind" the other teams. (Express and Star)

Stoke captain Ryan Shawcross, 28, could face Southampton in the Premier League on Saturday after missing the past eight games with a back injury.(Stoke Sentinel)

A former star player returned to visit his old club Liverpool at their training ground on Monday. The Anfield side tweeted: