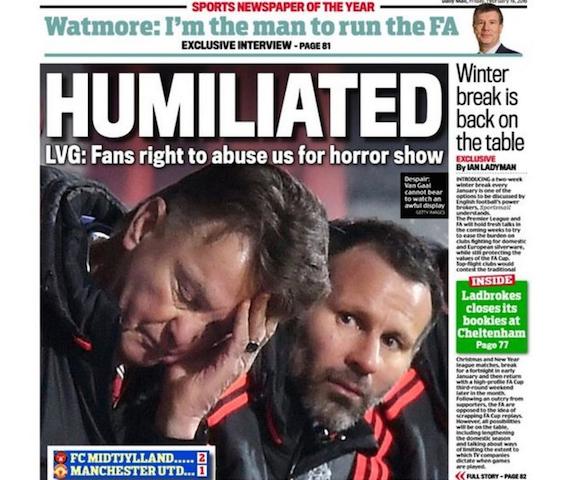 Manchester United are considering selling striker and captain Wayne Rooney in the summer after receiving a bid for the 30-year-old from a Chinese Super League club. Rooney could earn £500,000 a week as part of the deal. (Manchester Evening News)

United must act fast if they want former Chelsea boss Jose Mourinho, 53, as their manager. The Portuguese is considering a return to Inter Milan. (The Sun)

Mourinho has identified Inter striker Mauro Icardi, 22, as one of his first transfer targets should he take charge at Old Trafford. (Corriere Dello Sport in Italian)

United could use playmaker Juan Mata, 27, as part of a £60m deal for Atletico Madrid attacker Antoine Griezmann, 24. (The Sun)

Manchester City will make a £39m bid for Borussia Monchengladbach midfielder Granit Xhaka, 23, as they start to mould their squad to new boss Pep Guardiola's requirements. (Bild, in German)

New York Red Bulls and Orlando City want to take Manchester City midfielder Yaya Toure, 32, to the MLS. The Ivorian is expected to leave the Etihad when Pep Guardiola takes over as manager in the summer. (Daily Star)

The Football Association is planning talks with the Premier League about the introduction of a winter break but is opposed to the scrapping of FA Cup replays. (Daily Mail)

Chelsea midfielder Cesc Fabregas, 28, was involved in a heated argument with Paris St-Germain and Sweden striker Zlatan Ibrahimovic, 34, after the French club's 2-1 in Paris on Tuesday night. (Daily Mail)

Former Bolton striker Dean Holdsworth and a group of investors are on the verge of completing the takeover of the Lancashire club from majority stakeholder Eddie Davies. (Daily Star)

Manchester United players face having their wages cut by 25% if they fail to qualify for the Champions League. (Daily Mirror)

The first steps towards the redevelopment of Liverpool's stadium could be taken on Friday with the council expected to approve plans for the £260m Anfield regeneration project, which includes a new hotel and business hub. (Liverpool Echo)

Chelsea have met with representatives of Italy coach Antonio Conte, 46, as they search for a permanent successor to the sacked Jose Mourinho.(Gianlucadimarzio.com, in Italian)

Luis Cavani, father of Paris St-Germain striker Edinson, would like his son to move to Real Madrid, Manchester United or Juventus. The 29-year-old has been played out wide in the French capital. (Sport5 in Hebrew)

Inter Milan will try to renegotiate with Manchester City to avoid triggering a permanent deal for 26-year-old striker Stevan Jovetic, who has been on loan at the San Siro since July. (Football Italia)

Liverpool are considering triggering the £6.2m release clause in the contract of 28-year-old Real Betis goalkeeper Antonio Adan.(Fichajes.com, in Spanish)

Athletic Bilbao defender Aymeric Laporte, 21, has described Barcelona as "the best team in the world" as reports linking him to the Catalan giants emerge once again. (Football365.fr, in French)

"I don't know many elephants who can play football." Arsenal midfielderAaron Ramsey's horizons are broadened by Colchester Zoo's Tanya.

A group of young fans on a tour of Valencia's Mestalla adapted a chant to the tune of 2 Unlimited's 90s chart hit 'No Limits'- usually reserved for brothers Yaya and Kolo Toure - for the club's manager Gary Neville and his brother and assistant Phil. (Metro)

Jimmy Hill's former Match of the Day boss says it is unlikely any modern pundit could have the same cultural impact that Hill, who died in December, had.(Coventry Telegraph)