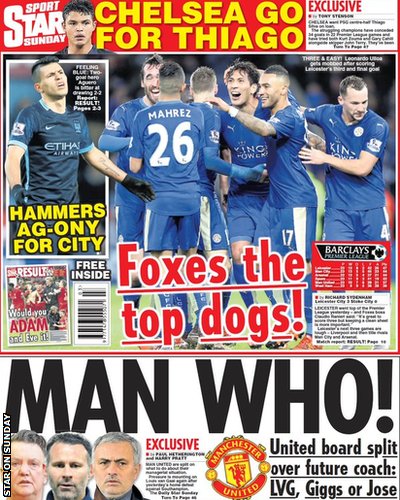 Liverpool target Alex Teixeira, 26, has told Shakhtar Donetsk that he would like to leave the club in January. (Globo, via Guardian)

Chile forward Alexis Sanchez, 27, insists he has no plans to leave Arsenal and will get a ­celebratory tattoo if the Gunners win the Premier League title this season. (Sunday Mirror)

The Star on Sunday leads on Manchester United's managerial issues

Manchester United knew in September that they would not make Pep Guardiola their new boss with a gentleman's agreement for the Bayern Munich manager to join rivals Manchester City believed to have already been struck at that point. (Sunday People)

United have been in talks over signing Real Madrid's unsettled forward James Rodriguez for £63m with the 24-year-old Colombia international believed to have a strained relationship with manager Zinedine Zidane.(Sunday Express)

Chelsea want Paris St-Germain's Brazil centre-half Thiago Silva, 31, on loan until the end of the season to solve their defensive problems.(Daily Star Star)

Meanwhile, the Stamford Bridge club are lining up a surprise move for France boss Didier Deschamps, 47, as their next permanent manager with the former midfielder's deal due to end after Euro 2016. (Sunday Mirror)

Manchester City are set to beat Liverpool and Arsenal to the signing of Athletic Bilbao and Spain Under-21 striker Inaki Williams, 21, for £38m. (Sunday Express)

Everton defender John Stones will be at the centre of a £50m transfer scramble in the summer, with Real Madrid, Barcelona, Manchester City and Chelsea all keen to sign the 21-year-old England international. (Mail on Sunday) 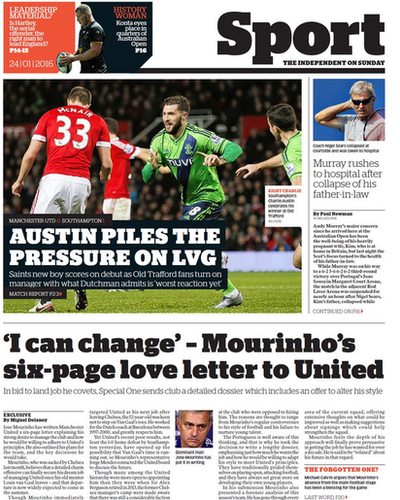 Liverpool are looking at a move for Leicester's Kasper Schmeichel, 29, as they step up their search for a new goalkeeper. (Sunday People)

Outgoing head coach of Manchester City's Under-21s Patrick Viera has warned that only one or two academy kids will make the club's first team unless the English structure improves. (Manchester Evening News)

Liverpool's goalscoring hero Adam Lallana had little sympathy for manager Jurgen Klopp after he broke his glasses in the goal celebrations in their win at Norwich, saying it served the German right for being on the Carrow Road pitch. (Liverpool Echo)

Newcastle manager Steve McClaren says that he will continue to talk to the club board about potential signings in the last 10 days of the transfer window. (Newcastle Chronicle)

Celtic boss Ronny Deila believes if his side had the cash available to clubs in England they could be as big as Barcelona and Real Madrid.(Sunday Express)

Bale was quick to praise Alli's effort at Selhurst Park

There was plenty of Twitter action from the Southampton players and plenty of happy faces after Charlie Austin's 87th-minute winner gave them a 1-0 win over Manchester United at Old Trafford. Shane Long  , James Ward-Prowse  and Fraser Forster  were among those who posted a picture of a very happy Saints squad on their way back to the south coast. 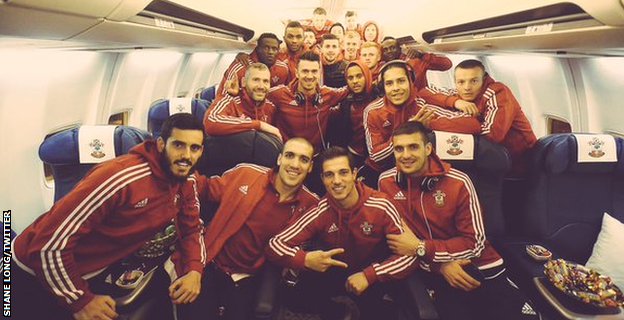 West Ham boss Slaven Bilic had an unusual post match discussion  about his side's 2-2 draw with Manchester City as Blues fan and Oasis star Noel Gallagher and Hammers-supporting comedian Russell Brand popped in for a chat. 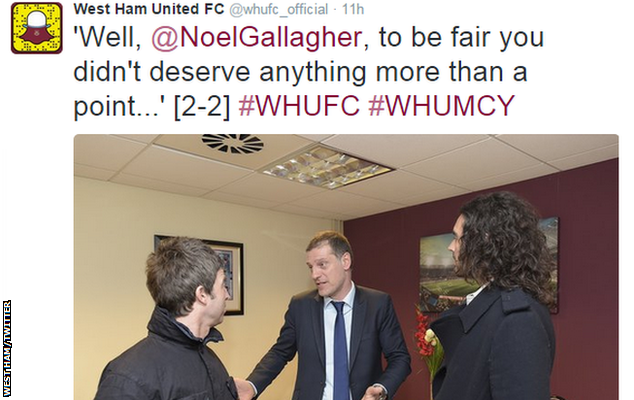 Special Royal Mint coins are set to be issued in the summer to honour the 50th anniversary of England's World Cup win. (Sunday Mirror)

Liverpool's injured striker Daniel Sturridge has been shunning the fine dining on offer at Anfield - instead tucking into sandwiches from Subway. (Sunday Mirror)