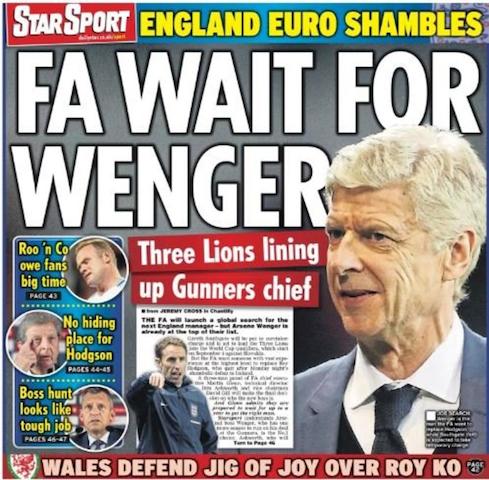 Arsenal boss Arsene Wenger is at the top of the Football Association's list of candidates to replace Roy Hodgson as England manager. (Daily Star)

The FA is set to make the introduction of a winter break a key part of wholesale changes to the structure of the game, in response to England's latest tournament failure. (Times - subscription needed)

England Under-21 boss Gareth Southgate could be in temporary charge of the senior team for up to a year with the FA ready to wait for the right permanent manager to become available. (Mirror)

Ex-England skipper Steven Gerrard says he cannot remember being so down as a Three Lions fan but highlights the influence of Australians Trevor Bayliss and Eddie Jones on the national cricket and rugby union sides, adding: "If you have the right man in charge of the talent it can come together quickly." (Daily Telegraph - print edition)

Former Germany captain Lothar Matthaus says Wayne Rooney's appearance in the Euro 2016 defeat against Iceland "has to be his last game for the national team". (Sun)

Former England international Paul Merson says the current squad "don't care" and adds he would have instantly retired had he played in the defeat by Iceland because "it's that embarrassing". (Daily Star)

Crystal Palace could miss out on Belgian striker Michy Batshuayi, 22, despite bidding more than £30m, as the Marseille player is holding out for a Champions League club. (Croydon Advertiser)

And Batshuayi will instead sign for London rivals Tottenham, with Marseille needing to sell to avoid a transfer embargo. (Daily Mail)

Alternatively, Chelsea will sign Batshuayi in a deal worth an initial £33.2m, as they seek to begin a busy summer of squad strengthening.(Guardian)

Manchester United have made an improved offer of £35m to Borussia Dortmund for attacking midfielder Henrikh Mkhitaryan, 27. (Kicker - in German)

Manchester City boss Pep Guardiola will try to push through moves for Everton's England defender John Stones, 22, and Spain and Celta Vigo forward Nolito, 29, now that both players are out of Euro 2016. (Manchester Evening News)

And Nolito, 29, is flying in for talks with City on Wednesday as he closes in on a £13.8m move. (Telegraph)

Argentina striker Gonzalo Higuain, 28, will not renew his contract with Napoli, according to his agent. (Radio Continental - in Spanish)

Southampton are set to out-bid Stoke in the battle to sign West Brom striker Saido Berahino, 22, by offering £16m. (Sun)

Steve Bruce's future as Hull City manager remains uncertain as owners the Allam family continue the search to find a buyer for the club.(Telegraph)

New Everton boss Ronald Koeman is interested in signing Poland winger Kamil Grosicki, 28. The Rennes player would be available for around £10m.(Liverpool Echo)

Dutch goalkeeper Maarten Stekelenburg, 33, could reunite with Koeman after spending last season on loan from Fulham at Southampton.(De Telegraaf - in Dutch)

Sunderland's hopes of bringing midfielder Yann M'Vila, 25, back to the Stadium of Light have been boosted after it was revealed the Frenchman, who spent last season on loan at the Black Cats, has been made to train separately by his club Rubin Kazan. (Chronicle)

Boca Juniors have made a fresh move to bring Sunderland defender Santiago Vergini, 27, back to Argentina.(Sunderland Echo)

Former Austria midfielder Paul Scharner, who was not a fan of Roy Hodgson during their time at West Brom, renewed his criticism of the former England manager following their defeat by Iceland.

And Gareth Southgate, the bookmakers' favourite to replace Hodgson, did not escape either, with former Middlesbrough striker Mido having his say on Twitter.

But it was all smiles in the Iceland camp, as Swansea midfielder Gylfi Sigurdsson proved with a photograph of the team's plane journey from Nice, posted on Instagram.

Not many households in Iceland missed their shock Euro 2016 victory against England, with 99.8% of the country's TV audience tuning in. It's not clear what the other 0.2% were watching. (AS)

Buenos Aires street signs have displayed the message "No te vayas Lio" which translates as "Do not go" after Barcelona forward Lionel Messi quit the Argentina side. (Marca)