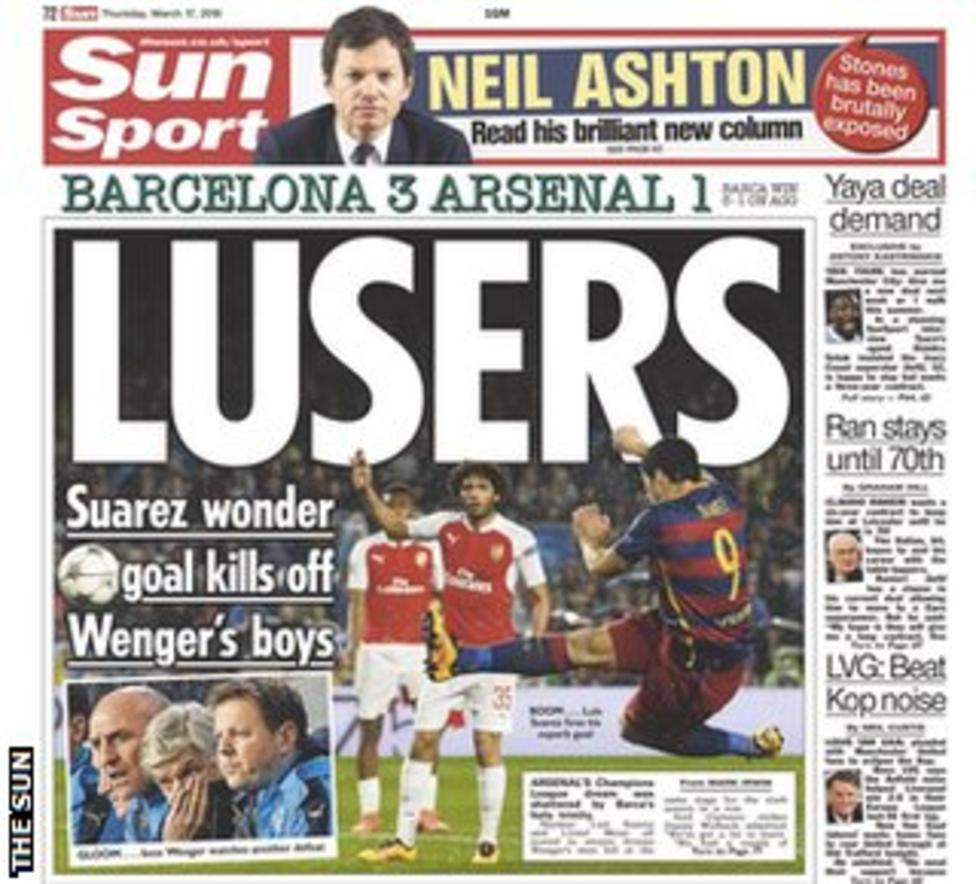 Yaya Toure, 33 in May, has told Manchester City he will walk away this summer unless he is offered a new contract next week. (Sun)

Chelsea have been put on alert after Paris St-Germain's Brazil international defender Marquinhos, 21 - a player they tried to sign last summer - revealed he could leave at the end of the season. (Daily Mirror)

Tottenham are planning a move for Mainz playmaker Yunus Malli, the 24-year-old Turkey international midfielder, according to reports in Germany. (Kicker, via Talksport)

Liverpool could hijack Porto's bid to re-sign Fernando but will only go as far as £10m for the 28-year-old Manchester City midfielder. (Sun)

West Brom manager Tony Pulis has been ordered to pay more than £3.5m after a Premier League mediation panel found in favour of Crystal Palace over a 'survival bonus' paid to him. (Sky Sports)

Liverpool and Manchester United are watching Germany international goalkeeper Marc-Andre ter Stegen and have been encouraged by the suggestion that Barcelona will sell the 23-year-old this summer if the price is right. (Daily Mail)

Leicester manager Claudio Ranieri wants to spend the rest of his career with the Premier League leaders. (Daily Star)

Manchester United assistant manager Ryan Giggs says it "hurts" that the club are not in the Champions League, adding "it is not a big gap" to reach the top four and that he is "relaxed" about his future. (Times - subscription required)

Tottenham manager Mauricio Pochettino is set to open formal talks with chairman Daniel Levy at the end of the season about a new contract.(London Evening Standard)

Swansea manager Francesco Guidolin is among the candidates being considered for the role as Italy boss, with Antonio Conte due to leave in the summer. (Daily Star)

Top-flight clubs are set to overhaul their reserve and youth-team set-ups, under new proposals put forward by the Premier League. New ideas include a full reserve league - nicknamed Premier League II - with £3m prize money for the champions. (Daily Mirror)

Coach Gary Neville could face problems at Valencia by linking up with the England squad next week for the international friendlies this month while the Spanish club continues to struggle. (Guardian)

Lazio forward Keita Balde Diao, 21, has revealed his ambition is "to play for the best teams in the world such as Barcelona, Real Madrid and Manchester United."(La Lazio Siamo Noi, via Daily Express)

Police plan to once again let Sunderland fans make their own way into St James' Park for this weekend's crunch Tyne-Wear derby with Newcastle.(Newcastle Chronicle)

After team-mate Dele Alli saw his boxing work in the gym on Twitter and challenged him to take on UFC fighter Conor McGregor, Spurs striker Harry Kane mocks up a poster of how a confrontation might look.

A budget response from former England international Rio Ferdinand whowrites: "Whatever your politics, less sugar and more sport for our kids feels like a good move."

Spurs wire up their England internationals Kyle Walker and Dele Alli for a lie detector test to answer a series of questions such as "did you brush your teeth this morning?" and "who is the best defender at Spurs?"(Tottenham Hotspur on Twitter)

Southampton striker Charlie Austin perhaps had some success at Cheltenham. "I've only done it again," he writes, adding the hashtags of three winning horses over the first two days of racing.

Norwich defender Ryan Bennett is losing interest in the Cheltenham Festival, however. "The build-up to Cheltenham is unreal but the reality of placing bets and losing has just hit me so it can do one."

Playmaker Bojan Krkic revels in the Stoke sunshine. Coincidentally at his glamorous former home, the Nou Camp, it was pouring with rain for Barcelona against Arsenal in the Champions League.

Manchester United midfielder Ashley Young, out since January with a groin injury, posts a picture of himself back in training and writes: "I've missed this, so good to be back out with the lads."

Team-mate Bastian Schweinsteiger posts the same picture and writes to Young: "Great to have you back on board."

Arsenal goalkeeper Petr Cech shows some support for understudy David Ospina during the Champions League defeat at Barcelona: "What a save from David Ospina."

Marseille's Abou Diaby says leaving Arsenal has finally helped him get over his many injury problems, having suffered 42 injuries over the course of his nine years in north London. (Metro)