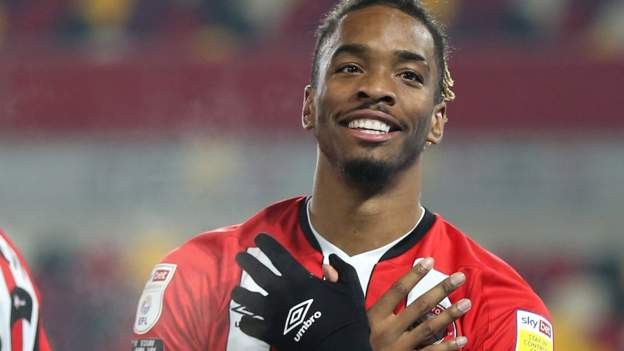 And the three points looked safe for the Bees when QPR defender Todd Kane was sent off for his second bookable offence, a high, late challenge on Marcus Forss.

QPR would argue that the hosts should have been reduced to 10 men themselves a lot sooner, however, for last man Mads Bech Sorensen's hefty first-half challenge on Dykes.

The Bees have now lost just one of their last 10 meetings with QPR in all competitions, winning eight of them.

And, up against former Bees boss Mark Warburton, they looked bang on course for a fourth straight win in the west London derby when Toney and Rico Henry combined to set up Janelt on the edge of the area and the German drilled his shot into the bottom right corner - his first goal for the Bees.

Bright Osayi-Samuel (right) was the architect for Lyndon Dykes' equaliser

But Rangers were level within 12 minutes, sparked by winger Bright Osayi-Samuel's powerful run down the right.

His superb cross, swung over to just outside the six-yard box, picked out Dykes, who arrived to crash home a left-foot volley into the roof of the net - his fifth goal of the season - and the only one the Bees have let in during their current run.

There might have been more joy for the visitors too, after Dykes was barged over right on the very edge of the box by Sorensen, who, as the last covering defender, was arguably lucky to stay on the pitch with just a yellow card.

To add to the Hoops' frustration, Brentford old boy Yoann Barbet's free-kick was deflected into the side netting for a corner before Dykes then wasted another good chance in space when he lost his bearings and blazed wide.

But Brentford looked more in control after the break. And, after Toney lucklessly had one chalked out for offside when VAR, had it been in use in the EFL, might well have judged him onside, it did not take long to make amends.

Marcondes arrowed in a superb near-post cross and the summer signing from Peterborough United got in first for his 12th Championship goal of the season, putting him level with Blackburn's Adam Armstrong as the second tier's top scorer.

It also added to any fears QPR might have of Friday fixtures. This was their 19th defeat out of the last 20 matches they have played on a Friday, in all competitions.

Sergi Canós (Brentford) is shown the yellow card for a bad foul.

Lyndon Dykes (Queens Park Rangers) wins a free kick in the attacking half.

Attempt missed. Saman Ghoddos (Brentford) right footed shot from the centre of the box is too high. Assisted by Ivan Toney following a fast break.

Ivan Toney (Brentford) wins a free kick in the defensive half.

Attempt missed. Ivan Toney (Brentford) right footed shot from outside the box is too high. Assisted by Sergi Canós.

Attempt blocked. Marcus Forss (Brentford) right footed shot from the centre of the box is blocked. Assisted by Ivan Toney with a through ball.

Marcus Forss (Brentford) wins a free kick in the attacking half.

Attempt missed. Lyndon Dykes (Queens Park Rangers) header from the centre of the box misses to the left. Assisted by Ilias Chair with a cross following a corner.