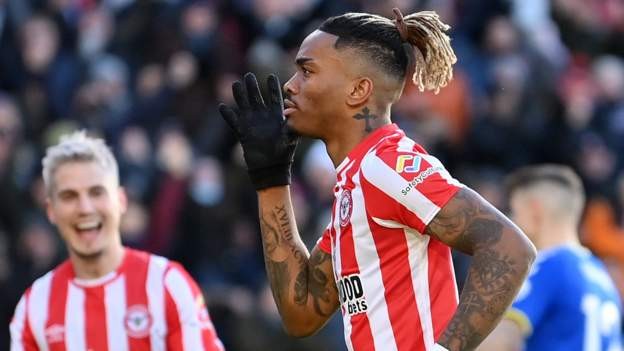 Brentford ended a five-match wait for a Premier League win with a home victory over Everton which extended the struggling Toffees' own winless run to seven games.

The goal ignited a largely uneventful start to a meeting between the two clubs rooted to the bottom of the Premier League's form table.

Salomon Rondon was denied an immediate equaliser by Bees goalkeeper Alvaro Fernandez at close range and Abdoulaye Doucoure produced a superb tackle to thwart Vitaly Janelt at the other end moments later.

Everton dominated following half-time but Rondon - replacing the suspended Richarlison in attack - saw an attempt blocked and Iwobi shot straight at Fernandez as the visitors chased an equaliser to no avail.

The hosts climb to 12th in the table after surviving intense late pressure at the Brentford Community Stadium - above Rafael Benitez's side, who slip to 14th.

Reaction to Brentford v Everton, plus the rest of Sunday's Premier League actionGo to the Brentford pageGo to the Everton page

Both sides had managed to claim only a single point from their past five league matches - two fewer than any other side in the division.

But the table paints a far rosier picture for Brentford following this result. Having put an end to a four-game losing run with a draw at Newcastle last time out, the promoted side sit seven points clear of the relegation places heading into December.

It is the Bees home form in particular which will have concerned manager Thomas Frank before kick-off, with just four points to show from six games since promotion.

Yet, despite failing to win in front of their own supporters since beating Arsenal on the opening day, Toney oozed confidence as he stepped up for his penalty - the 25-year-old taking two steps and maintaining eye contact with Pickford as he rolled the ball into the bottom left corner.

It proved to be Toney's only touch in the Everton box all game, but it was enough to put the game beyond a toothless opposition.

Winless in their last 35 away league games when trailing at the break, a stuttering Everton side were unable to launch a second-half comeback and consequently find themselves on their longest winless run since April 2016.

Their dip in form has been stark. Benitez's men were fifth in the table after taking 13 points from their opening six fixtures, however they have earned just two more since then.

Doucoure's intervention to halt Janelt's progress gave his side hope for the second half, but in the continued absence of star striker Dominic Calvert-Lewin they were unable to make their superiority count.

The defeat will further increase the pressure on former Liverpool manager Benitez ahead of a meeting with their bitter Merseyside rivals on Wednesday.

Attempt missed. Bryan Mbeumo (Brentford) right footed shot from the left side of the box is too high.

Attempt saved. Yoane Wissa (Brentford) right footed shot from outside the box is saved in the bottom left corner. Assisted by Shandon Baptiste.

Ivan Toney (Brentford) wins a free kick in the attacking half.

Abdoulaye Doucouré (Everton) wins a free kick in the defensive half.

Attempt saved. Alex Iwobi (Everton) header from the centre of the box is saved in the top right corner. Assisted by Lucas Digne with a cross.

Attempt missed. Salomón Rondón (Everton) header from the centre of the box is close, but misses to the right. Assisted by Séamus Coleman with a cross.

Frank Onyeka (Brentford) wins a free kick in the defensive half.

Ben Godfrey (Everton) is shown the yellow card for a bad foul.

Ivan Toney (Brentford) wins a free kick in the attacking half.