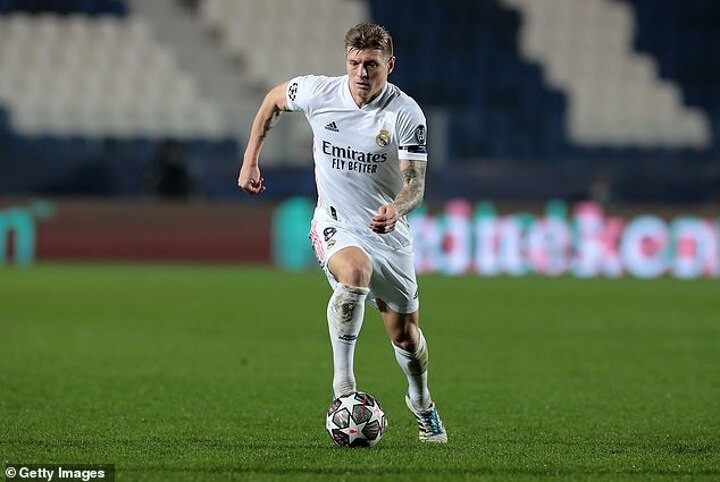 Toni Kroos has admitted he isn't sure where David Alaba's next destination will be when his former team-mate leaves Bayern Munich at the end of the season.

Alaba revealed in a press conference earlier this month that he will look for a new challenge following a trophy-laden 13-year spell in Bavaria.

The versatile defender has been strongly linked with a move to Real Madrid, Kroos' current club, but the Germany international remains firmly in the dark over this summer's expected transfer saga.

He told the BILD 'Bayern Insider' podcast: 'I don't know anything. I haven't talked to him and he hasn't called me, but I think he's old enough to make a decision.

'I don't know what offers he has on the table either. If I had spoken to him on the phone 30 times, I would know their intentions.

'I only read what they say on this subject.'

Alaba, 28, will walk away from Bayern at the expiration of his contract in June - and a host of elite European clubs have been touted to swoop for him on a free transfer.

Despite Manchester United, Chelsea and Liverpool all linked, Real Madrid are believed to remain the firm frontrunners for Alaba's highly-coveted signature.

The LaLiga giants have put together a star-studded shortlist of targets to replace Sergio Ramos, according to reports.

The 34-year-old talisman looks to be edging closer to leaving the Bernabeu this summer and Alaba may represent a shrewd piece of business.

AS claim that Alaba tops the wish list and labelled the potential move as an 'unbeatable' market opportunity.

It has been suggested that Madrid offered Alaba €11million (£9.6m) in wages - but his figure is below the €15m (£13.1m) reportedly tabled by Manchester City.

Alaba himself admitted that it is no 'secret' that his representatives are now in contact with other clubs.

He was coy over links to LaLiga, however, insisting: 'My Spanish is not good, but good enough for the pitch.'

Having spent a couple of years in Bayern's academy, Alaba moved into the first-team and went on to help the club lift 24 trophies in total.