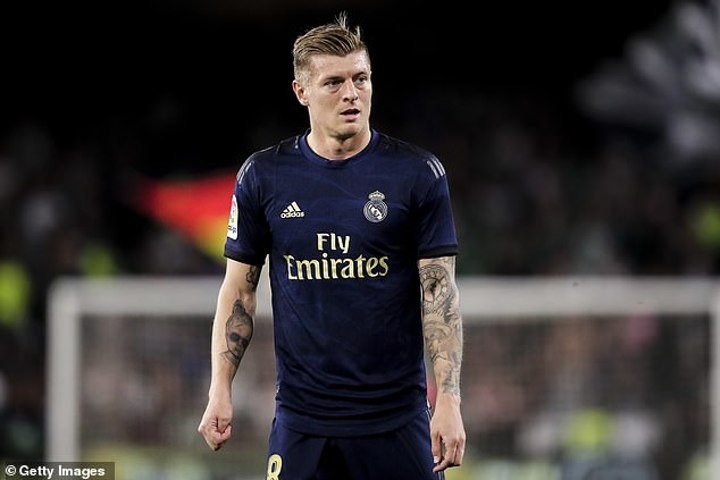 Toni Kroos would prefer to receive a full salary, allowing him to do 'sensible' things and help out where needed with the money, rather than see players' wages reduced during the coronavirus crisis.

Football clubs are facing financial difficulties due to the coronavirus outbreak, losing out on a lot of money due to competitions being suspended.

Speaking on the SWR podcast, the Real Madrid star said 'a drop in salary is like a donation in vain or to the club.'

He believes reducing player salaries only benefits the club's already-wealthy owners, while the money could be better used elsewhere.

Clubs such as Tottenham Hotspur and Newcastle have come under huge criticism for furloughing non-playing staff, taking advantage of the British government's job retention scheme.

Across Europe, some clubs such as Juventus and Barcelona have already implemented pay cuts for players in order to ease the financial strain, something which is also being discussed at Real Madrid and has been described as 'inevitable.'

'I am in favor of paying the full salary and that everyone does sensible things with it,' said Kroos. 'Everyone is asked to help where necessary, and there are many places where it is necessary.'

Spain is one of the worst-affected countries in the world by the deadly coronavirus, with over 140,000 cases and 13,000 deaths.

Kroos said in his interview that Real Madrid currently have no problems with maintaining their players' salaries, however admits that matters will be complicated depending how long the lockdown lasts.

'Many clubs lack planned income,' he said. 'It also depends on how long everything will be stopped. If, for example, football is played again in May, solutions will surely be found. If it is necessary to stop until winter, I can imagine that some club will no longer do so. That would change football as we know it.'

He also expects a dip in the transfer market, something which Real Madrid have already run into this week.

'It is questionable whether some sums of money can still be paid,' said Kroos. 'I think that all the problems will arise. Some more, some less. Perhaps this was not bad because everything was put into a bit extreme level.'

Real Madrid have put their pursuit for Kylian Mbappe on hold until next year due to the uncertainty, but they could end up getting him at a cut-rate price of £132million rather than his current valuation of £189million.