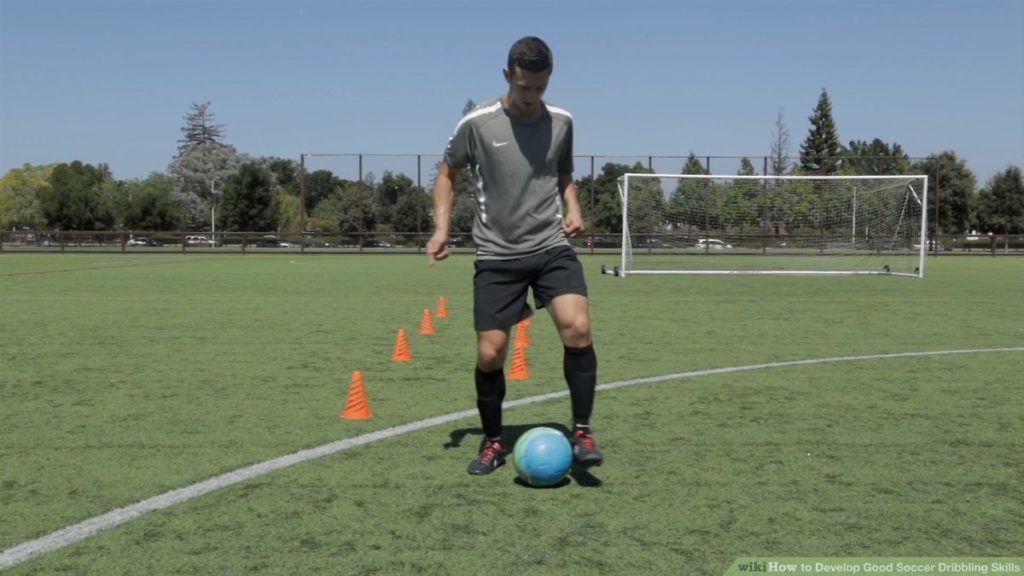 A football game is not only about passing or dribbling but is based on several techniques and skills. Developing football skills is essential; the more well-rounded and skillful the players are, the better equipped they will be to defeat their opponents and lead their teammates to success. Essential skills, techniques, and exercises to learn and improve at a football game and become the most successful footballer in the team.

Let us now dive deeper into the skills every player should work on, important techniques to level up the game, and important exercises to improve football skills and techniques.

10 Football Skills That Every Player Should Have

Blocking is a football skill performed by driving shoulders into the opponent’s midsection and then moving downfield. Blocking involves making a cover surrounding the quarterback to protect a teammate’s pass.

Passing accuracy is the fundamental skill that involves accuracy and power of the player’s feet to pass the ball to either the strikers or the teammates to make a goal.

Dribbling is the most basic and efficient football skill, which involves running with the ball with complete balance, coordination, and control. An efficient dribbler can easily move the ball in different directions and maneuver the opponents at the smoothest pace without losing possession of the ball.

Shooting is a fundamental skill that requires mental and technical qualities and involves dispatching the ball to the post on the opponent's side. It is the game's ultimate objective, as every goal counts as a win.

Tackling is not merely running with the ball and carrying it to the end but also a way of tackling the opponents. This skill is necessary to carry the ball in the player's grip.

Receiving is a technical and important skill that needs to be acquired by all the players, especially the goalkeeper. Receivers must extend their hands to form a target for the ball to land.

Decision-making skills determine how the players approach the match and where they decide to pass and tackle the ball before receiving it.

The heading is an essential part of the game that helps the players score goals and clear the ball as they defend. During a dead ball situation, heading becomes an important skill.

Touch and ball control is an important skill that allows players to play effortlessly when they still feel the football. Working on controlling the ball helps build up the play, especially when players are receiving the ball.

Spatial awareness allows players to design a map of the match mentally. With this skill, players can control the ball fully and scan the entire court to evaluate each player and make the correct decision.

7 Football Techniques to Level Up Your Football Game

Juggling helps in possessing easy control of the ball. It can be practiced with the feet for about 5 to 10 minutes daily.

The shooting trick involves opting for a side shoot since it has more accuracy than the other ankle. Shoot wide instead of high, as this increases the scoring chances and reduces the risk of blocking by the goalkeeper.

Players can master the ball for the shots and passes on the field with the major marking and defending technique called heading. It is used against opponents to tackle football and score.

Volley is a great technique that involves lower chances of the defendant in the move. Players need accuracy, power, coordination, and speed to execute a volley. It involves directly striking the aerial football without any control on it and before it touches the ground.

Imbibing a defensive technique or skill is extremely important to tackle defensive players as they create a shield that needs to be escaped to score. A team with strong defensive players can easily tackle opponents and reach their destination.

Feints is used when an opponent dribbles with the ball and the player wants to bypass the opponent to get possession.

This simple and effective trick involves dribbling around the football field with complete accuracy. Most players use their stronger feet and ignore their apparent weaker ones. Concentrate on the weaker foot to see amazing results, as playing with both feet can potentially change the position and the pace of the game within a few seconds.

Box blast exercise can enhance a player’s explosive power to execute ideal football skills and create separation from opponents by running and slipping out with football.

Working out on the calves before a match is extremely important, as any strain on the calf muscle may arise during the game due to swift twists and turns.

Base rotation involves working on the ankles and hips, which support the players in troubleshooting with their coordination.

Drag-backs exercise enhances football skills for dragging the ball back while the opponents surround a player.

Ball mastery is an excellent football drill that enhances dribbling skills on the football ground. It gives complete control of the ball and is the simplest of all exercises.

Becoming a successful football player is challenging, even for the most talented footballers. The above skills, techniques, and exercises are essential for a football player's development, but one may require to go beyond the skills to become a professional. Mastering a football game requires practical knowledge and experience to achieve success.