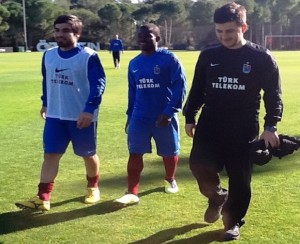 The slippery midfielder has already signed a five-year pre-contract agreement with Trabzonspor, one of the top-four clubs in Turkey.

Vice president of the Turkish giants Nevzat ?akar confirmed they have reached an agreement over the talented Ghanaian player.

The 20-year-old, former Hearts midfielder, has started training with the club in their winter break training in Antalya.

But his big move seems not to have been completed with the blessing of his club Bocaspor who have publicly stated that Jebrin move is 'immoral'.

Jebrin's career has been littered with controversial moves.

Hearts of Oak condemned his move to Bocaspor when his contract with the Accra-based club expired nearly two years ago.

His attempted move to English side Portsmouth collapsed three years ago because of the club's financial problems.