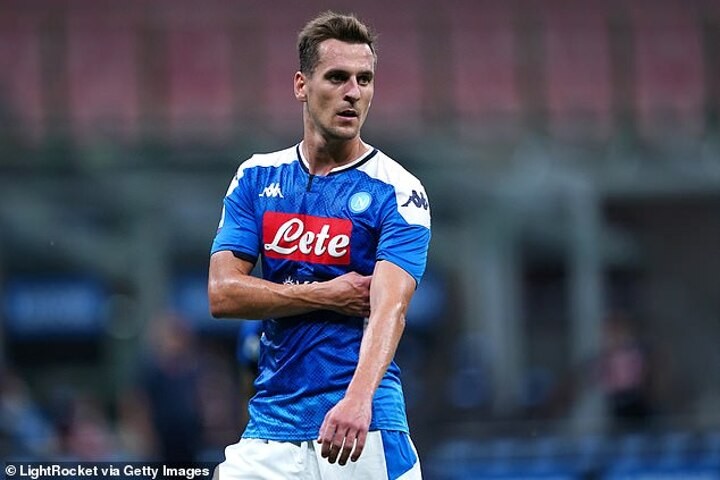 Marseille are closing in on the loan signing of Arkadiusz Milik from Napoli after beating Tottenham and Everton to his signature, according to reports.

Milik has fallen massively out of favour at Napoli to the extent that he was left out of both their Serie A and Champions League squads, meaning he hasn't featured at all so far this season.

Tottenham and Everton were looking to capitalise on his tough situation at Napoli but according to Sky Sport Italia, Marseille have got their man with Milik travelling to France today to complete his medical.

The Ligue 1 outfit have reportedly reached an agreement with Napoli to take the Poland striker on a loan deal with an obligation to buy.

Marseille will pay an £8million loan fee plus £2.7m in bonuses to Milik while giving 20 per cent of a future resale to Serie A outfit Napoli, according to Tuttomercatoweb.

Milik has been desperate for regular first-team football after being frozen out in the summer and his loan move to France will give him valuable game time ahead of the Euros.

Milik has opted for a switch to Marseille over Premier League sides Tottenham and Everton this January.

Tottenham were reportedly in talks to sign Milik last September in a £25m deal but a move failed to materialise with Jose Mourinho looking for back-up to talisman Harry Kane up top.

But the addition of Carlos Vinicius has somewhat weakened their need for another central attacking option in recent times.

But Calvert-Lewin has been in fine form in the Premier League to date, while Richarlison has continued to prove a danger up front for the Toffees, meaning Everton's need for an out-and-out striker has become less important recently.

Milk has scored 48 goals and produced five assists in 122 matches for Napoli, and he will be raring to get going again at Marseille in his bid to claim his spot at the Euros with Poland.