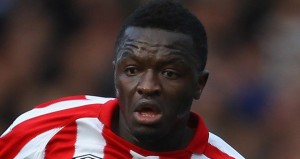 English sides Tottenham and Fulham are in the race to sign Inter Milan midfielder Sulley Muntari, according to the player's European representative.

Muntari played on loan at Sunderland earlier this year before returning to Inter.

The Ghana international, who is under contract with Inter for a further year, has been strongly linked with a return to England this summer.

"Tottenham and Fulham are several of the Premier League teams that are interested in Muntari," Muntari's representative Claudio Mossio told Press Association Sport. "But right now his destination is not unclear.

"The situation must be resolved as soon as possible because the transfer market ends tomorrow (Wednesday)."

"Muntari wants to play in the Premier League," he said. "He really likes that tournament and his family would be very happy in London."