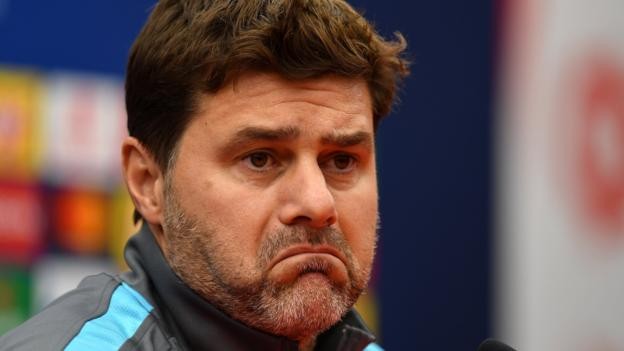 Pochettino was in charge of Tottenham for five years

"The only way is up" for Tottenham and it is a "great time to become the club's manager", according to former Spurs boss Harry Redknapp.

BBC Sport understands Jose Mourinho is a strong contender for the vacancy.

"Someone will walk in there, a new face, a new voice to take over a team that is as low as they could go and he will lift them," said Redknapp.

He told BBC Radio 5 Live: "It is a great time to come and manage Tottenham Hotspur. Whoever comes in, the only way is up because they cannot go any lower than where they are at the moment in the Premier League.

"There could not be a better time to take the job, it is a great time for someone to become Tottenham manager."

Portuguese Mourinho, the favourite for the vacancy, has been out of a job since being sacked as Manchester United manager in December 2018.

But Redknapp believes Spurs should not appoint a big-name foreign manager and instead opt for and Englishman.

Asked who he thought should be the next manager, he said: "Chris Wilder at Sheffield United. What the boy's done... that's amazing.

"But he won't get a look in, they will end up going for another big name who is not as clever as him. Wilder could win league titles with the right club in the Premier League.

"But English managers don't get a chance, they will go foreign again - they won't look at [Bournemouth manager] Eddie Howe."

View more on twitter 'Spurs have massively under achieved'

Former Spurs and England striker Gary Lineker feels the club will not find a "better replacement", adding on Twitter: "He (Pochettino) helped the club to punch massively above their weight for years."

Pochettino was appointed in May 2014 and led the club to the Champions League final last season, where they lost to Liverpool in Madrid.

The former Southampton boss guided Tottenham to the League Cup final in his first full season while two third-placed finishes sandwiched a runners-up spot in the Premier League in 2017.

As well as leading Spurs to a runners-up finish in last season's Champions League he also led them to fourth in the league and his successful reign in north London has seen him linked with Real Madrid and Manchester United.

Spurs chairman Daniel Levy said Pochettino and his staff had been relieved of their duties after "extremely disappointing" results at the end of last season and the beginning of this season - rather than reports of a fall out between the chairman and manager.

Redknapp added: "Go through the squad, man for man in every position, it is full of internationals, every cover position is too. They have the best centre-forward in the world in Harry Kane, Son Heung-min, Dele Alli, it is an unbelievable squad but they have massively under achieved.

"This year they do not look like reaching the Champions League, which is not good enough for (owner) Joe Lewis and Daniel Levy, they must have Champions League football now with the stadium and training ground.

"They are hoping to bring someone in now who can do the magic and get them into the Champions League."

The Tottenham Hotspur Supporters' Trust were "shocked and saddened" at the decision to remove Pochettino from his post and were critical of the club's board.

They said in a statement: "During his time at Spurs, Poch gave us many of our best moments as supporters, made Tottenham Hotspur a force to be reckoned with again, and forged a strong link with the fans. We will never forget the joy he brought us.

"But many fans thought Poch had earned the right to turn it around in the first sustained period of poor form we've had during his time at the club. We now have to look forward and take stock. But there are questions that must be asked of the board of THFC.

"The club's statement makes it clear the board has decided to sack the manager and coaching staff. It is their decision. We question why this decision was taken at the end, rather than the beginning, of the international break.

"We question whether the timing of the decision leaves the club with much choice in who takes over."

Tottenham's Belgium defender Toby Alderweireld told Sky Sports: "We came a long way together. A lot of players achieved big things. I can see where we've come from before my time at Spurs. We have to be thankful for what he achieved at the club.

"We have to try to work hard and I think there will be a (new) manager quickly. Spurs are a big club so there will be a big manager for us. We (the players) have to stay together and change things as quickly as possible."

'Will he be a fans' favourite? I would say not' - analysis

"This has shocked the football world but it is a results business.

"I still think the mistake was not to get rid of Christian Eriksen, Toby Alderweireld and Jan Vertonghen, who are out of contract. When you get players who are running out of contract, mentally and physically they have found it hard. They are a fit group.

"Mauricio Pochettino has done a marvellous job, he has not freshened it as he wanted to, the stadium cost an absolute fortune and he has kept hold of players he wanted to move on.

"Unfortunately Tottenham cannot stand still, they cannot be a team in 10th to 14th place in the Premier League. They were in the Champions League final last season, in the top four the last four years running and he has been a big part of it.

"They have looked at it and thought, where are Tottenham going at the moment? Finishing 10th is not going to pay the bills or attract the big players.

"Who will come in next? Jose Mourinho is nailed on, is he a Tottenham-type manager? Will he sort it out? Will he be a fans' favourite with his style? I would say not, unless he changes his philosophy.

"Carlo Ancelotti would be a better fit - he has won as a player and a manager.

"Football moves very quickly, eventually it happens. He has been brilliant for the club but the way they have developed, they cannot stand still."