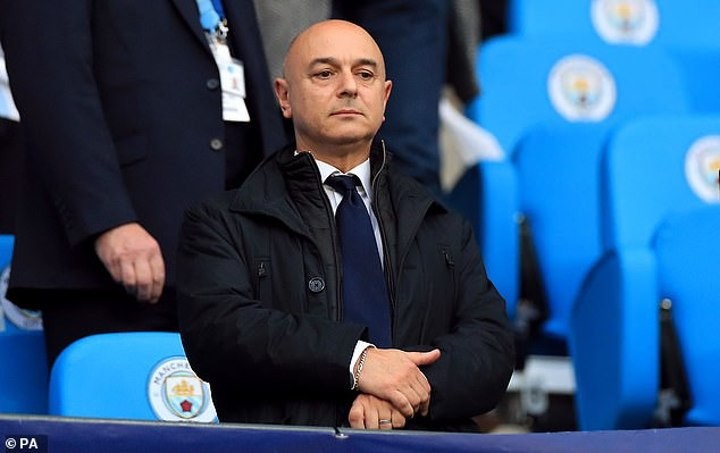 Tottenham Hotspur staff found out they were being forced to take 20 per cent pay cuts just 30 minutes before chairman Daniel Levy announced the move.

And some of the non-playing employees have also been encouraged to take their annual leave during the coronavirus crisis, according to the Daily Telegraph.

Levy sent out an email at 10am ahead of the 10.30am announcement to all of the club's non-playing staff informing them of the 20 per cent pay cuts for April and May, and the decision to use the Government's furlough scheme in some cases.

He stressed the decision had been taken to try to save jobs in the long term.

But the move has angered some and one source told the Daily Telegraph: 'How can the players still be on £100,000 a week? How can they still be taking 100 per cent of their wages while people on £30,000 a year are having to take cuts? It's wrong.'

Tottenham believe it is inevitable their stars will face a pay cut but recognise it is important this will be a unilateral decision across the Premier League, who are set to make significant decisions at a meeting on Friday.

Levy, who earns around £3million a year, said: 'We hope the current discussions between the Premier League, PFA and LMA will result in players and coaches doing their bit for the football eco system.'

It could mean Mourinho having to forego a portion of his £290,000-a-week wages while football remains suspended.

And the club's high earners, such as £200,000-a-week striker Harry Kane and £100,000-a-week midfielder Dele Alli, may have to follow the lead of players at the likes of Barcelona and Juventus in taking pay cuts.

His message, released on the club's website on Tuesday morning, outlined measures Spurs are taking while football remains on lockdown amid the deadly pandemic.

They are the second top-flight club to place a proportion of staff on furlough after Newcastle United did likewise on Monday, saying they will apply to the Government's coronavirus job retention scheme.

The message from Levy read: 'As recently as 18 March I said: 'We shall all need to work together to ensure the impact of this crisis does not undermine the future stability of the Club.'

'The decision by governments around the world to effectively close down economies with unheard of peacetime impacts on civil liberties in order to minimise the terrible effects of the COVID-19 pandemic is the right one to protect human lives.

'The crushing devastation on industries in many countries, the inter-dependence of international trade and travel in every aspect of our daily life is only now beginning to be felt. Every person on this planet will be affected and in my lifetime I cannot think of something so impactful.

'When I read or hear stories about player transfers this summer like nothing has happened, people need to wake up to the enormity of what is happening around us.

'With over 786,000 infected, nearly 38,000 deaths and large segments of the world in lockdown we need to realise that football cannot operate in a bubble.

'We may be the eighth largest club in the world by revenue according to the Deloitte survey but all that historical data is totally irrelevant as this virus has no boundaries.

'The club's operations have effectively ceased, some of our fans will have lost their jobs and most will be worried about their future.

'Our sponsors will be concerned about their businesses and our media partners have no certainty when we may play games again or whether we will be allowed to play in front of our fans. In the meantime, the Club has an annual cost base running into hundreds of millions of pounds.

'We have seen some of the biggest clubs in the world such as Barcelona, Bayern Munich and Juventus take steps to reduce their costs.

'Yesterday, having already taken steps to reduce costs, we ourselves made the difficult decision – in order to protect jobs – to reduce the remuneration of all 550 non-playing directors and employees for April and May by 20 per cent utilising, where appropriate, the Government's furlough scheme. We shall continue to review this position.

'We hope the current discussions between the Premier League, PFA and LMA will result in players and coaches doing their bit for the football eco system.

'I have no doubt we will get through this crisis but life will take some time to get back to normal.

'I hope we will never take for granted so many basic things such as getting off the train at Seven Sisters, walking along Tottenham High Road, entering our stadium with our family and friends, and buying a beer and pie ahead of watching Spurs play at home.

'Many families will have lost loved ones, many businesses will have been destroyed, millions of jobs lost and many clubs whether big or small may struggle to exist.

'It is incumbent on me as Chairman to ensure we do everything we can to protect our employees, our fans, our partners, our Club for future generations – and equally important – our wider community where we have such an immense sense of responsibility.

'I wish everyone good health, a speedy return to normal life and watching Spurs at home in front of our fans. Stay safe.'

Tottenham's accounts for the 2016-17 season revealed that Levy's pay jumped from £2.84m to more than £6m, making him comfortably the highest remunerated director in the Premier League at that time.

However, the club's latest accounts stated that Levy's pay had been halved to around £3m.