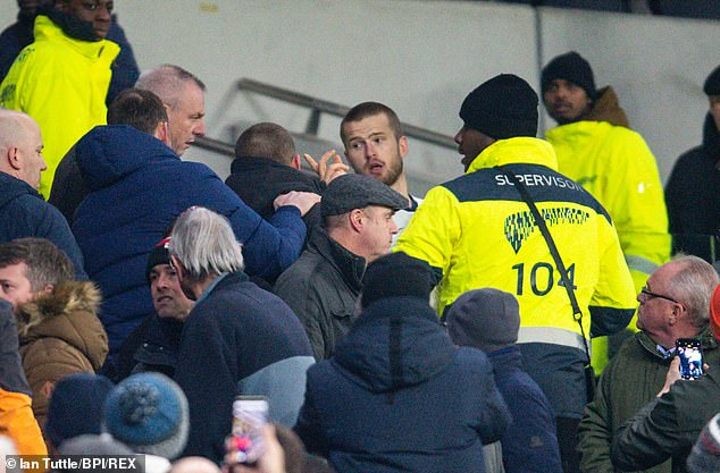 Tottenham's Eric Dier will face not face police action after he confronted a fan in the stands after his side's FA Cup defeat to Norwich.

Dier vaulted rows of seats to drag his younger brother Patrick away after he became involved in a post-match bust-up with a supporter.

The Metropolitan Police were forced to look into the incident but after review have said: 'The investigation concluded with no further action.'

The Football Association could still charge Dier following the altercation on March 4.

The FA launched an investigation into the extraordinary scenes after the final whistle at the Tottenham Hotspur Stadium.

The midfielder reacted angrily after spotting his brother involved in a row which began when the England star's sibling took exception to the midfielder being insulted.

Witnesses described the abuse being hurled from the section of supporters near the tunnel towards Spurs players, including Dier, and staff as 'horrendous' as tensions spilled over.

As he looked up towards where his family members were, Dier spotted the fan, wearing a black and orange coat, gesturing towards him though initially ignored him and continued heading for the tunnel.

When he then looked up a second time and saw that a row had broken out between his brother and the fan Dier quickly clambered up into the stands.

Other witnesses, alerted by the commotion having initially vacated the section of the stands following the game's conclusion, saw Dier with his arm around his brother, dragging him away from the scene.

Tottenham boss Jose Mourinho said that his player had acted in a way that 'professionals cannot' but insisted he would side with Dier.