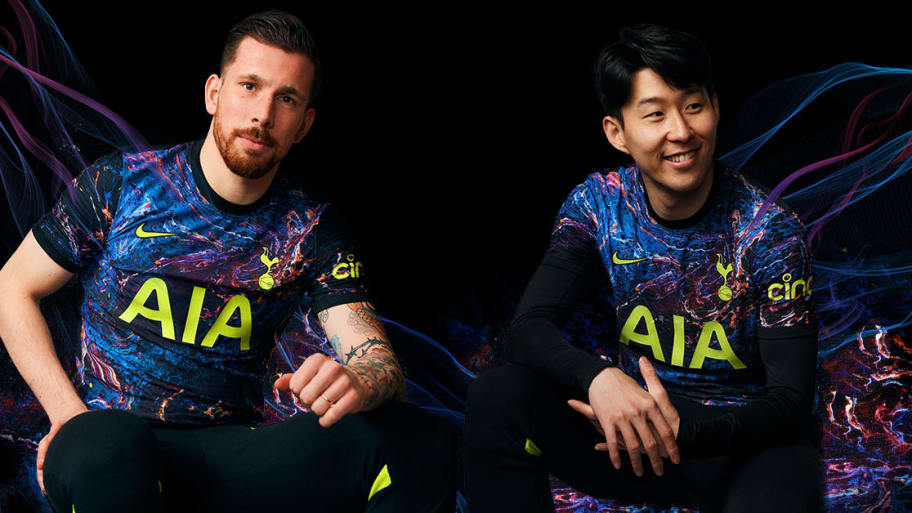 Tottenham Hotspur have revealed their all-new Nike away kit which will be worn for the 2021/22 season.

We've already seen the club's new home kit, which has been designed to celebrate the 100-year anniversary of the inclusion of the famous cockerel on the Spurs shirt.

There's no throwback vibe to the away kit, with the club instead going for more of a futuristic design which has been created to symbolise the power and creativity of local artists.

With a dark base, the shirt ends up looking more like an artist's canvas, with a bold, vibrant print splattered all over, giving out a futuristic space vibe.

To add to the whole look, the club crest, Nike Swoosh and all sponsor logos are 'venom green', while both the shorts and the socks are a simple black.

Sticking with Nike's Move to Zero initiative, which strives to produce kits with zero waste - this kit is made from 100% recycled polyester fabric which is made out of discarded plastic bottles, delivering peak performance at a reduced cost to the environment.

That's an important part of this kit for Spurs, who were named as the Premier League's greenest club this year for their ongoing work to protect the environment.

This could be the first way kit for a whole host of new players, with Spurs looking to be very active in the transfer market following the arrival of sporting director Fabio Paratici.

The former Juventus chief has used his ties to Italy to land a loan deal for Atalanta goalkeeper Pierluigi Gollini and hopes to follow that up with a blockbuster deal for team-mate Cristian Romero, who was voted Serie A's best young defender last year.

There are also plans to bolster at the other end of the pitch, where Southampton striker Danny Ings is believed to be towards the top of the club's wish list.

The 2021/22 Tottenham Hotspur Away Kit, along with selected items from the new Express Collection, are available to order now via Spurs Shops and online now!

This article was originally published on 90min as Tottenham unveil new Nike away kit for 2021/22 season.