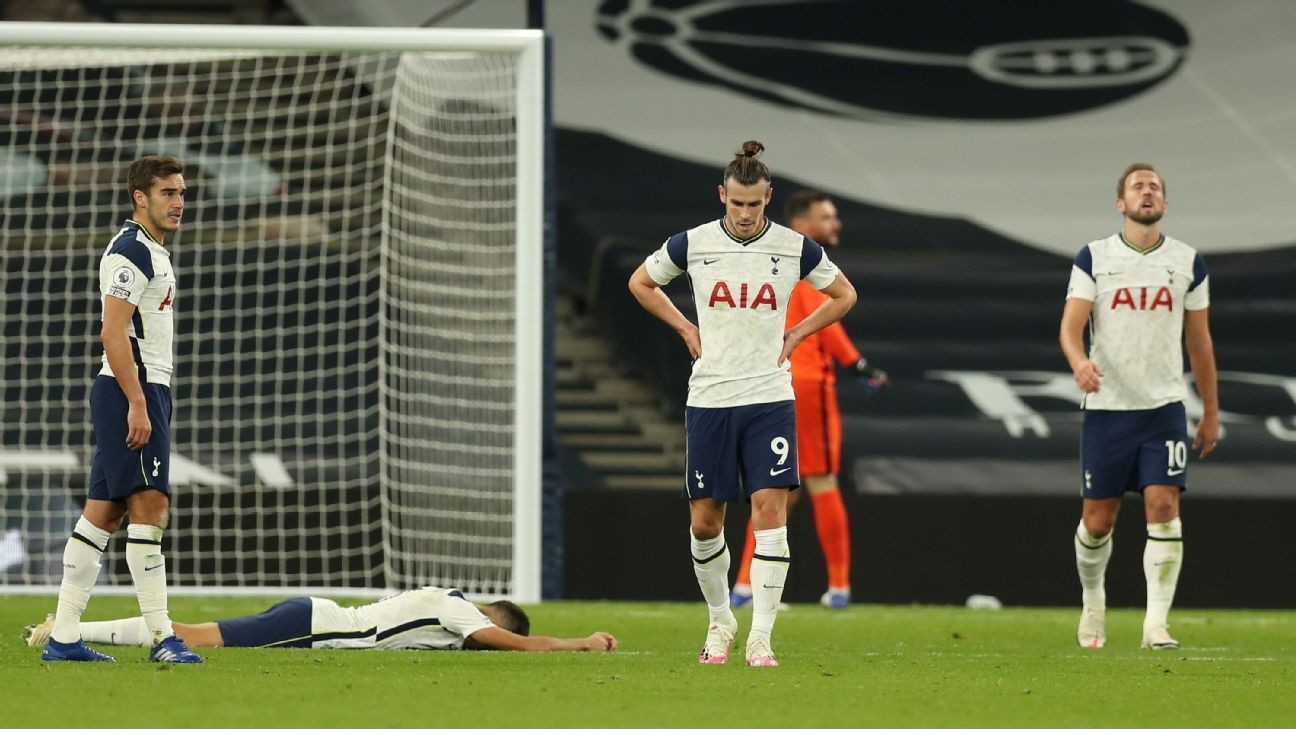 Tottenham's attack really is going to have to be the best around if they keep defending like they did in Sunday's 3-3 draw vs. West Ham. Gareth Bale's second coming at Spurs inevitably drew the focus before the Hammers' visit and the 31-year-old had the chance to write the perfect script, leaving Angelo Ogbonna on the turf as he cut inside and unleashed a left-foot shot in stoppage-time.

Bale's shot flashed wide of Lukasz Fabianski's left-hand post and the moment evaporated. Instead of providing the storybook homecoming, Bale's miss instead encapsulated how clinical Spurs need to be given a porous back-line that somehow contrived to throw away a 3-0 lead in the most dramatic of circumstances.

It was yet another example of Tottenham's lack of a winning mentality or that ruthlessness Mourinho has identified as the major obstacle preventing them from lifting silverware.

The Premier League is throwing up high-scoring matches throughout the division this season -- Spurs know this only too well, having thrashed Manchester United last time out -- but teams still have to translate their superiority to the scoreline when they enjoy the better periods of play. Tottenham did that emphatically at Old Trafford and it appeared they had done so again here, racing into a 3-0 lead against a West Ham side completely flummoxed by Harry Kane's movement.

Midway through the first half, Hammers boss David Moyes could be heard trying to add his voice to a strained conversation between centre-back Angelo Ogbonna and midfielder Declan Rice. Each appeared to be arguing the other should be responsible for picking up Kane, who was readily finding space behind Rice and his central midfield partner, Tomas Soucek.

"His hold-up play is on another level," Rice said afterwards. "We had trouble dealing with him."

What an understatement. Spurs took the lead after just 46 seconds as Kane launched a superb raking pass over the top for Son Heung-Min, who curled home a shot with the unerring inevitability that comes from a partnership in such devastating form. Kane then collected Son's pass, nutmegged Rice and drove home a second, before Sergio Reguilon swung over a left-wing cross for the England captain to head home a third.

That header was Kane's only touch in the box during a first half in which Mourinho's blueprint looked crystal clear. With Kane dropping deep to turn provider, Son and Steven Bergwijn repeatedly burst forward to stretch a Hammers defence caught between closing down Kane and pushing too high up the pitch to leave themselves vulnerable in behind.

Son and Kane's understanding looked telepathic. With five goals and seven assists, Kane set a Premier League record for goal involvements in the first five matches of a season. The pair have now combined for 28 League goals, a tally only bettered in the division's history by Didier Drogba and Frank Lampard (36), Thierry Henry and Robert Pires (29) and Sergio Aguero and David Silva (29).

Sunday's match threatened to be another dismantling of a bewildered opponent in the manner Spurs beat United, but instead it bore the hallmarks of their previous League home game against Newcastle, when they simply failed to kill the game off. Kane forced Fabianski into a low save and later hit the post at the end of another wonderful sweeping move, all before the improbable comeback began.

Fabian Balbuena headed home Aaron Cresswell's 82nd-minute free-kick, and Davison Sanchez turned Vladimir Coufal's cross into his own net three minutes later. The visitors had improved markedly after half-time -- Mourinho could be apportioned some blame here, as he was unable to stop Michail Antonio's growing influence when Moyes switched him to the wide-left channel -- but nobody anticipated Lanzini's stunning equaliser, struck first-time from distance and finding the top corner.

Mourinho argued with some credibility afterwards that Spurs are not showing signs of structural flaws at the back given they are primarily conceding from set-pieces, and so perhaps one telling, almost throwaway line in a post-match television interview offered the most damning explanation.

As West Ham's comeback gathered pace, Mourinho argued "their belief went up and my guys were not strong enough to cope with it psychologically." He refused to elaborate on that point when pushed, despite West Ham offering some neat symmetry as Mourinho's first opponents when they raced into a 3-0 lead at the London Stadium last November, only to concede twice late in the game and hang on for a 3-2 win.

"I don't want to go there," he said. "We have new players -- we play much better than last season. I can also say the same about West Ham. West Ham is today a much better team than when Moyes arrived. The team is in evolution, we know how we want to play. We score lots of goals.

"I think there is a great evolution in the team, even defensively the team is much better than before. That's why I was saying before, to look to the goals that we concede, it was only Danny Ings [in a 5-2 win at Southampton].

"After that, was penalty Newcastle, penalty Man United, another penalty at Southampton. Today, two lateral free-kicks and an own goal. Defensively, we are much stronger, but in the last part of the game, this happened and sometimes it is difficult to explain."

There had been so much to like about Tottenham prior to their collapse. Tanguy Ndombele was a marauding presence in midfield, hinting at a resurrection that would add valuable resilience to their midfield, while that one flash of Bale's threat cutting in off the right offered a glimpse of the Son-Bale-Kane triumvirate that has so many Tottenham supporters salivating.

Mourinho has described the strength in depth Spurs have up front as the best-ever group in terms of numbers he has assembled in his managerial career, which is no small accolade given his time at the helm of Porto, Chelsea, Inter Milan, Real Madrid and Manchester United. Meanwhile, little blame could be placed on Bale's late profligacy, given this was his first appearance at club level since June 24 following a game-and-a-half with Wales on international duty.

"It is a pity that he couldn't score that fourth goal that [would have been] a beauty and would kill the game, but that's football," said Mourinho. It is a regret Tottenham cannot afford to repeat.