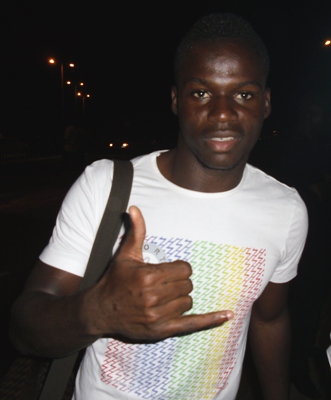 Striker Ahmed Toure has been recalled to begin training with Asante Kotoko's first team after offering a groveling apology to coach Maxwell Konadu.

The 24-year-old was relegated to the reserves after returning from an un-permitted extended leave to visit his ailing mother in his native Cote d'Ivoire.

Last season's Premier League MVP argued her mother's condition worsenedÂ necessitating his return delay but the technical and management team were having none of it.

He was thus slapped with a fine and dumped to the club's reserves side while the first team continued flourishing in domestic competitions.

Toure who doesn't want to be left out of what certainly seems a 23rd Premier League triumph at the end of the current campaign made a passionate apology to management and head of the technical team (Maxwell Konadu) which was accepted.

He has thus been ordered to rejoin the first team on Monday but is unclear whether he will be involved in the Premier League game at Berekum Chelsea on Wednesday.

Kotoko currently lead the Premier League log with a staggering nine-point difference over rivals Hearts of Oak with eleven matches left to go.