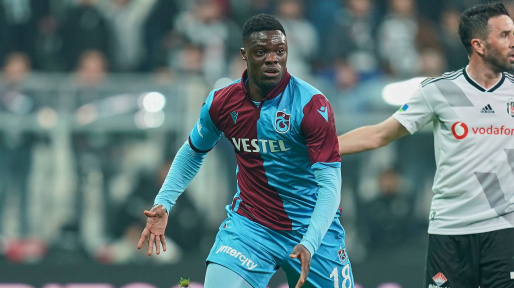 There is no detail concerning the deal and the striker's stance but reports say the 26-year-old has been handed fresh terms.

The former Leeds United has been handed an improved offer following his exhilarating spell at the club since joining.

Trabzonspor management have decided to sit on the table with the deadly striker over the terms of the new deal.

Coach Abdullah Avci says its important for the club to create a transfer pool and create next season's  staff structure.

"Let's create a transfer pool and create the next season's staff structure," and will present a preliminary list at the meeting he plans to hold with the managers next week."

The 26-year-old has been the go-to guy for Trabzonspor this season scoring six goals in 15 appearances in the ongoing season.

Ekuban scored late in the game to help Trabzonpspor win their first Turkish Super Cup in a decade against Istanbul Basaksehir last week.

Management of the team have been impressed with the performance of the Black Stars forward and have offered him a three-year contract.

His new contract will see his wages increased from 750,000 euros to 1 million Euros.

Trabzonspor are hoping to tie the Ghana International down with the new contract in order to wade off interests from other interested clubs.

GHANAsoccernet.com has gathered that Caleb Ekuban has accepted the offer and will sign the contract extension.