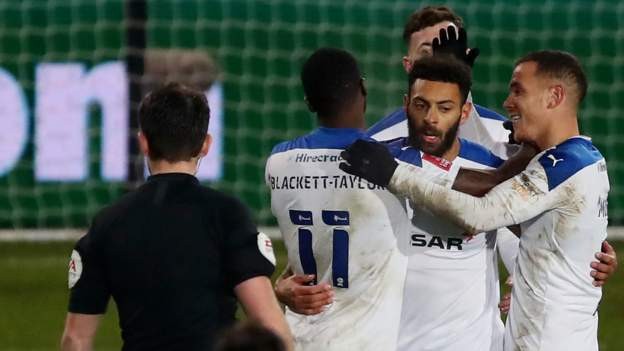 Substitute Kaiyne Woolery scored a beautiful goal to send League Two Tranmere Rovers into the FA Cup third round at the expense of Brackley Town.

In a game of few clear-cut chances, Woolery came off the bench on the hour mark to curl in off the right-hand post from 18 yards.

The game was Brackley's fifth in this year's competition, and while they acquitted themselves well against a team 56 places higher in the football pyramid, they lacked the necessary quality in the final third to present any meaningful problems to Tranmere.

The win is Keith Hill's second since taking charge of the Merseyside club last weekend.

Tranmere Rovers boss Keith Hill speaking to BBC Sport: "It was a difficult fixture - it was a good goal. They made it very awkward with the two defensive midfielders they played with and our diamond.

"We had to try and stretch the game in the second half and get the ball into the wide areas. It's a good goal and I'm so glad that the substitutions worked.

"I'm pleased with the performance and the clean sheet and we're into the next round."

James Vaughan (Tranmere Rovers) wins a free kick in the defensive half.

Attempt blocked. Danny Lloyd (Tranmere Rovers) left footed shot from the right side of the box is blocked. Assisted by James Vaughan with a headed pass.

Peter Clarke (Tranmere Rovers) wins a free kick in the defensive half.

James Vaughan (Tranmere Rovers) wins a free kick in the attacking half.

Attempt blocked. Kaiyne Woolery (Tranmere Rovers) left footed shot from the right side of the box is blocked. Assisted by Paul Lewis.

James Armson (Brackley Town) wins a free kick in the attacking half.