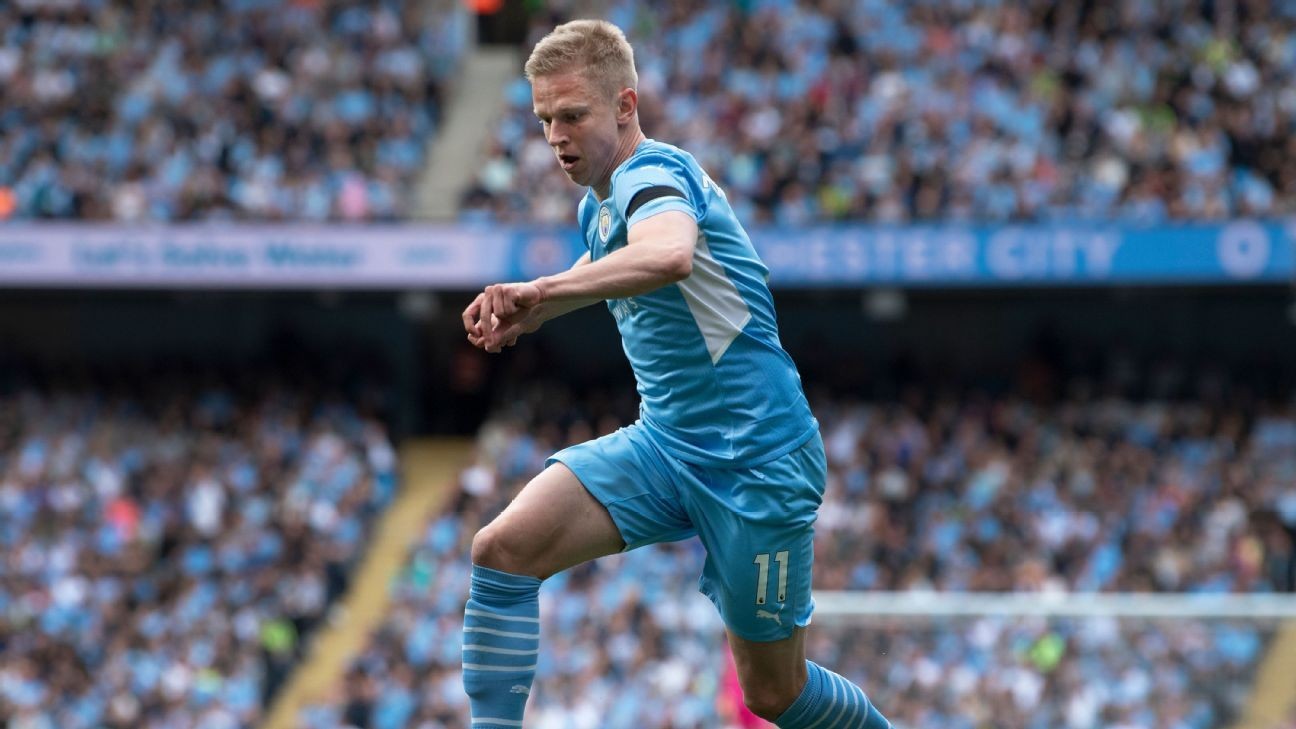 The Sun reports that the Gunners are close to landing their fifth signing of the summer having agreed the fee with Mikel Arteta's old club City for the Ukraine international.

Technical director Edu Gaspar is now working to finalise the deal, which hinges on being able to agree personal terms with the 25-year-old. Zinchenko isn't willing to play as backup to Kieran Tierney, and instead he's keen to find out exactly what role he'll have to play at the Emirates if he moves to north London.

To that end, Arteta is considering using Zinchenko in a central midfield role, which is an area of the pitch that has been causing him issues not only last season, but throughout preseason too.

Arsenal want to make Man City's Oleksandr Zinchenko their fifth signing of the summer, according to reports. Visionhaus/Getty ImagesLIVE BLOG

10.12 BST: Bayern Munich have once again distanced themselves from a move for Manchester United striker Cristiano Ronaldo.

Ronaldo has made an official request to leave United this summer so he can continue to play Champions League football, sources have confirmed to ESPN.

Bayern were thought to be one of the few clubs in the Champions League that could afford the 37-year-old, but they have no intention of making an offer.

"I love Cristiano Ronaldo, a fantastic player, but each club has a philosophy and I am not sure if it would be the right signal for Bayern and the Bundesliga to send if we were to sign him now," Bayern CEO Oliver Kahn said.

Sporting director Hasan Salihamidzic added: "I have a lot of respect for Cristiano Ronaldo, but we are not interested in him."

And coach Julian Nagelsmann joined the band of officials to deny the reports, saying: "I saw all of the rumours about my interest in signing Cristiano Ronaldo, but it is not true."

On Saturday, Bayern confirmed Robert Lewandowski will join Barcelona after the clubs reached a verbal agreement for his transfer on Saturday.

Ekitike, 20, turned down a move to Newcastle United in favour of the switch to PSG, who he joins on a season-long loan with the option to make the switch permanent.

Paris Saint-Germain is pleased to announce the arrival of Hugo Ekitiké from Stade de Reims. ✍️

The French striker is on loan, with an option to buy, until the end of the season. ??#WelcomeHugohttps://t.co/SSOzpWUXpq

- Barcelona have expressed an interest in Carney Chukwuemeka, and now Aston Villa seem willing to part with the England Under-19 European Championship winner. Fabrizio Romano believes the Villains are looking for a fee of around £20m, but Barca face stiff competition from a number of other clubs. Chukwuemeka is entering the final year of his contract, which means Aston Villa must decide between facing the prospect of losing him for nothing next summer if they don't offer him a new deal, or allowing him to leave for a fee this summer.

- Internazionale are pushing to finalise a deal for Torino centre-back Bremer, according to Fabrizio Romano. Personal terms with the 25-year-old were already agreed in January, and now his representatives will meet with Torino in an effort to get the move sorted as early as Monday as Simone Inzaghi looks to complete his squad additions. Bremer has also interested Juventus and a number of English clubs, including Liverpool and Tottenham Hotspur.

- Nicolo Zaniolo has been in good goal-scoring form for AS Roma during preseason and Juventus are said to be monitoring the midfielder's contract discussions. Calciomercato reports that, while the 23-year-old's existing contract is due to end in 2024, he's keen to renew, but only with an increase in salary. Talks are currently at a stalemate, which has interested the Bianconeri. Juve could be able to tempt him to Turin for a fee of around €40-45m, with a percentage of any resale heading back to the Italian capital.

- Paulo Dybala's future is still cloaked in uncertainty, but Calciomercato has revealed that Roma boss Jose Mourinho has called the Argentine playmaker in an attempt to beat off competition from Inter Milan and Napoli. They believe the 28-year-old would prefer a move to the San Siro but that he's not prepared to wait much longer for an offer, and Mourinho believes his personal intervention will help push Roma to the front of the queue. Roma are offering Dybala around €6m a season for four years, a deal Napoli feel they can surpass.