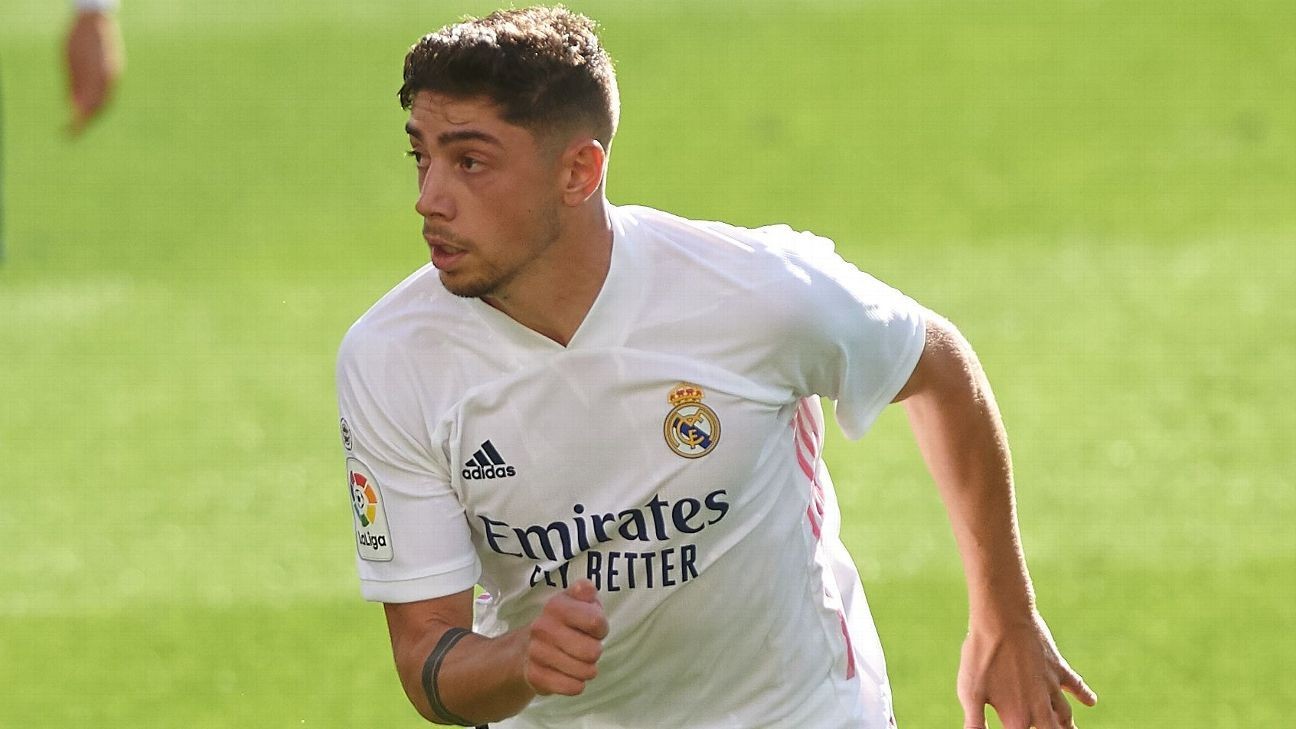 The coronavirus pandemic made the transfer market unlike any before it, but there was still plenty of action on Deadline Day. With the window closed across the major leagues in Europe, you can check out the latest major completed transfers across the globe.

The youngster, who has a massive £640 million release clause at the Bernabeu, is slowly but surely starting to prove himself in Real's first team after years of hype from the media and the club themselves.

United midfielder Paul Pogba has been tipped to go in the opposite direction in recent months, but the Red Devils' focus seems to be shifting towards bringing Valverde over to Old Trafford with the idea of a swap deal being fresh in their mind.

20.58 BST: Manchester City will consider pursuing Lionel Messi in the January window in hopes of beating potential rivals to his signature, reports the Daily Star.

City appeared to be in pole position to sign Messi this summer before the 33-year-old's change of heart about leaving Barcelona. They know they will have competition and could offer £15 million this winter, which the outlet says could make the difference as Barca face losing Messi for free in the summer.

19.50 BST: Huddersfield have signed free agent midfielder Alex Vallejo until the end of the season, the club announced.

The former Spain Under-19 international last played for CF Fuenlabrada.

Van Dijk is set for surgery and could miss multiple months as he recovers. Joe Gomez and Joel Matip are expected to be the Reds' centre-back pairing in Van Dijk's absence. The only issue? They've never partnered each other for an entire match before, and Liverpool are thin on alternative options should they struggle.

The 21-year-old Homegrown product is expected to sign a contract extension once the deal is completed.

17.07 BST: Wolves striker Raul Jimenez has admitted that "you always have to keep doors open" despite recently signing a new contract at the club.

Jimenez, 29, signed a new deal until 2024 earlier this month, just a year after turning his season-long loan from Benfica into a permanent move.

Before that, the Mexico international was linked with some major European clubs including Real Madrid and Juventus, and he has not ruled out a future switch.

"I was on my days off, on holiday, and every day that I woke up I was at a new club. It was just rumours, that's it," he told Sky Sports. "I'm happy here and happy to stay here.

"You always have to keep doors open for everything but never lose your mind. It's going to be like this for all the transfer windows.

"If I stay, I'm very happy and I'm going to keep playing the same. If I have to leave, well it's going to be part of it. We are professional football players and it is part of our life."

Bournemouth quoted West Ham in the region of £18m to sign King, although a transfer could not get completed before Friday's deadline for domestic transfers. That was despite telling United they valued the Norwegian at close to £50m in January.

Solskjaer was keen to bring in King last season when Marcus Rashford suffered a back injury, but after being put off by the price tag, turned his attention to Odion Ighalo, United are pointing to the disparity over King as evidence of the difficulties they believe they face in the transfer market. Sources told ESPN that in January, analysts relayed to Solskjaer and executive vice-chairman Ed Woodward that King's market value was around £15m.

They were prepared to go higher given their need for a striker but were shocked when Bournemouth asked for a fee that would have made King, a former Old Trafford academy graduate, the fifth most expensive player in the club's history despite having just 18 months left on his contract.

14.58 BST: Barcelona coach Ronald Koeman says his club will again try to sign Memphis Depay in the next transfer window.

The Catalan giants failed to acquire the Dutch striker this summer despite the 26-year-old wanting to arrive to the Camp Nou and Olympique Lyon having already agreed a deal with Barca.

"That is certainly a possibility," Koeman told Dutch newspaper AD. "I will try as I would like him to have him there. But I cannot estimate what the financial situation of the club will be in January. We will have to wait and see. It will depend on the club. We wanted Memphis because he is a great player and because he has qualities that in my opinion, we are in need off, especially to give depth to our attacking play."

Depay, who will be a free agent in June, claimed his transfer to Barca failed because "certain rules stopped it". Barca had to sell players before they could add Depay and that did not happen on transfer deadline day.

"Depay is strong, dynamic and can play in the centre of attack or on the left," Koeman said.

Welbeck, 29, was a free agent following the termination of his contract at Watford by mutual consent.

Brighton manager Graham Potter said of the former Manchester United and Arsenal forward: "We are delighted to have Danny joining us. He will complement our existing striking options.

"He's got an undoubted pedigree, and he is quick and technically very good. He will add to our attacking threat and we are thrilled to add another player of his experience and quality."

✍️ Albion have completed the signing of striker Danny Welbeck.

The former Manchester United, Arsenal and Watford forward has agreed a one-year deal with Albion!

13.06 BST: Borussia Dortmund CEO Hans-Joachim Watzke says he thinks that Manchester United "misjudged" their pursuit of Jadon Sancho in the transfer window, but has not ruled out the possibility of a future transfer.

United had been trying for much of the year to sign the England winger, but were unwilling to pay the €120m transfer fee that Dortmund wanted. The German club gave United a hard deadline of Aug. 10 to meet their valuation, but that came without a satisfactory bid being submitted.

Sancho remains at Dortmund, where he has made four appearances so far this season, most recently in Saturday's 1-0 win at Hoffenheim (stream the replay on ESPN+ in the U.S.).

"Perhaps a club that wanted him misjudged it and believed we were ready to compromise," Watzke told German broadcaster ZDF. "We had a clear line, and we will have it next summer.

"In this day and age you can never say that a player is totally unsellable. But it is also absolutely clear that we don't want to give anybody up."

Sancho's contract at the Westfalenstadion runs until 2023, meaning Dortmund will still be in a position of strength in any negotiations over a move for the 20-year-old next summer.

- Dawson: No Sancho, no centre-back -- United's transfer window has fans expecting the worst

Jan Aage Fjortoft praises the Borussia Dortmund hierarchy for having so much faith in Gio Reyna.

11.51 BST: Bayern Munich left-back David Alaba continues to play a big part for the European champions despite the stand-off between him and the club over his contract, which expires at the end of the season.

The Austria international in Saturday's 4-1 win at Arminia Bielefeld (stream the replay on ESPN+ in the U.S.) meaning he has started each of the club's three Bundesliga fixtures since missing the season-opening 8-0 win over Schalke.

As it stands, Alaba can open talks with foreign clubs in January over a free transfer next summer.

Last month German outlet Sport Bild said that Bayern offered the 28-year-old an annual salary of €11m and a further €5m as bonuses. Kicker reported that Alaba's side, represented by agent Pini Zahavi, requested a €125m package for a new five-year deal.

10.34 BST: Antoine Griezmann, who has been linked with a move to Paris Saint-Germain in recent weeks, struggled on Saturday when playing in the central role he has wanted since joining Barcelona.

Griezmann, who earned his fourth La Liga start in Saturday's 1-0 loss at Getafe, returned to lead the line in Barca's attack having previously played on the right in the previous three league games.

After scoring in Wednesday's 2-1 win against Croatia, Griezmann had said he felt good while representing his country because national team boss Didier Deschamps "plays me in my best position." However, he took just one shot against Getafe and has yet to score for the Catalan giants this season.

Earlier this week, Spanish programme El Chiringuito reported that Griezmann was PSG's top target and they were ready to make a move in the January transfer window.

Julien Laurens thinks Antoine Griezmann "made a mistake" complaining about his predicament at Barcelona in public.

09.30 BST: Chelsea forward Timo Werner has said that Chelsea must strengthen their defending if they are going to win any trophies this season, as the club remain focused on signing West Ham's Declan Rice.

Only Chilwell played in Saturday's home game against Southampton, in which Werner scored his first two Premier League goals and set up another for fellow new arrival Kai Havertz, but Chelsea twice led a lead slip and the game ended 3-3.

"The first half we played very well," Werner told the BBC. "When you get a goal two or three minutes before half-time it is not easy. You have to think with a clear head. Southampton make a lot of pressure on us and pressed us high. We gave them too much in terms of opportunities. We have to win the game.

"I don't know if we have a problem but the last three games we concede six goals and it is not where we want to be, to compete for titles. In Germany we always say defence wins titles. If we concede so many it is hard to win games and win titles."

Sources have told ESPN's James Olley that Chelsea will look to sign Rice in January if West Ham show signs of softening their stance in negotiations.

The Mirror is reporting that Barcelona manager Ronald Koeman is eager to try and sign Liverpool's Georginio Wijnaldum and Manchester City's Eric Garcia during the January transfer window.

The belief is that Barca may not have the cash necessary to force Liverpool or City to agree to a deal for either man, but Koeman has urged the board to try and make it a reality.

It's been an uncertain start to the La Liga campaign for Barca, and while they do have a strong squad at their disposal, they do seem to be in the early stages of their re-development.

The Mirror is also reporting that Koeman expects Lionel Messi to leave at the end of the season.

The future of the Argentina star has been a source of great discussion, and over the last few months, it genuinely seemed as if he'd be leaving the Nou Camp. He was heavily linked with Manchester City and a reunion with Pep Guardiola.

Barca fans were happy to see him hang around for this season but it does now appear as if it'll only be for one more year with the club.

- Leeds United star Kalvin Phillips is set to spark a bidding war next summer, the Mirror reports. The 24-year-old has made a strong start to life in the Premier League with the Yorkshire club with Liverpool and Tottenham Hotspur both being interested in securing his services. If they want to sign him, however, they'll have to pay upwards of £50m.