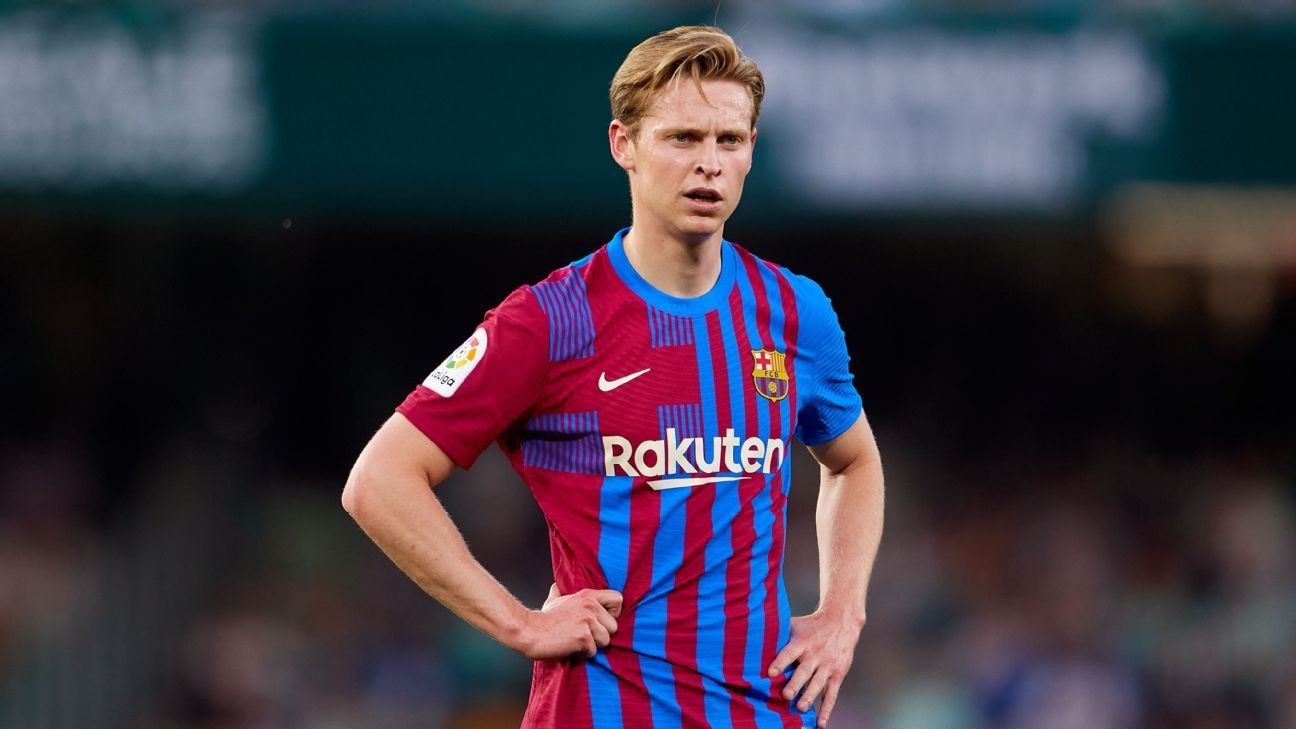 Chelsea are monitoring the situation of Barcelona midfielder Frenkie de Jong and could make a move if his transfer to Manchester United falls through, according to The Guardian.

Transfer grades: Tottenham an A- for Richarlison3hJon Molyneux-CarterTransfer window preview: Our guide to the biggest deals10dESPNWomen's Euros big questions: England or Spain to win it all? Or will Netherlands, Germany go on a run?2dBill Connelly

The Red Devils have long been linked with the Netherlands international and have now reportedly agreed a fee of €65m with the Blaugrana, meaning negotiations are now centred around De Jong's personal terms. He is open to moving to Old Trafford despite previously stating that he is in no rush to leave Barcelona, who are in need of extra funds.

However, the former Ajax player reportedly wants to play in the Champions League, which is something he won't be able to do yet at Man United.

Chelsea had watched De Jong closely before he joined Barcelona and Thomas Tuchel is said to be a big admirer of his, and while it isn't certain a move will be made it is felt this could be more straightforward than trying to sign West Ham United's Declan Rice.

The Blues' priorities are defence and attack as they have been linked with Manchester City duo Nathan Ake and Raheem Sterling, Leeds United's Raphinha, Juventus' Matthijs de Ligt and Sevilla's Jules Kounde.

However, there is some uncertainty around their midfield despite the plan to use Conor Gallagher, as Jorginho and N'Golo Kante could leave after Saul Niguez returned to Atletico de Madrid following his unsuccessful loan.

Frenkie de Jong has been linked with Manchester United, but Chelsea are now emerging as another possibility. Photo by Fran Santiago/Getty ImagesPAPER GOSSIP

-Tuttosport have reported that AC Milan are hoping to beat Internazionale to the signing of Paulo Dybala, who is a free agent after his Juventus contract expired. It is also stated that they are interested in Roma's Nicolo Zaniolo and could include players in a deal to bring down the €50m demands being made, while there is also interest in Real Madrid's Marco Asensio, who has been told he can leave by Carlo Ancelotti.

- Chelsea winger Hakim Ziyech wants to join AC Milan, who are trying to sign the Moroccan on loan with an obligation to make the deal permanent, according to Calciomercato, who claim that Ziyech is Milan's priority. There will need to be discussions between the Blues and Rossoneri, as the latter wants the deal to total €25m while the former want €5m more.

- In need of €40m, Atletico de Madrid are open to letting Jose Maria Gimenez leave but are demanding €60m for the Uruguay international, reports AS, who add that there is interest in the centre-back. While no current interested clubs are mentioned in the report, there is mention of Real Madrid and Manchester City looking at him in the past.

- Ko Itakura has completed his medical ahead of a move from Manchester City to Borussia Monchengladbach, as reported by Sky Sports Deutschland. City are set to make just over €5m from the transfer after the Japan international had previously gone out on loan thrice.

- Fiorentina are seemingly busy in the summer transfer window, as Calciomercato have reported a trio of names La Viola are aiming to bring in. Shakhtar Donetsk's Dodo and Leicester City's Dennis Praet, who spent last season on loan with Torino, were joined by Real Madrid's Luka Jovic in the report. The first is said to be getting closer.