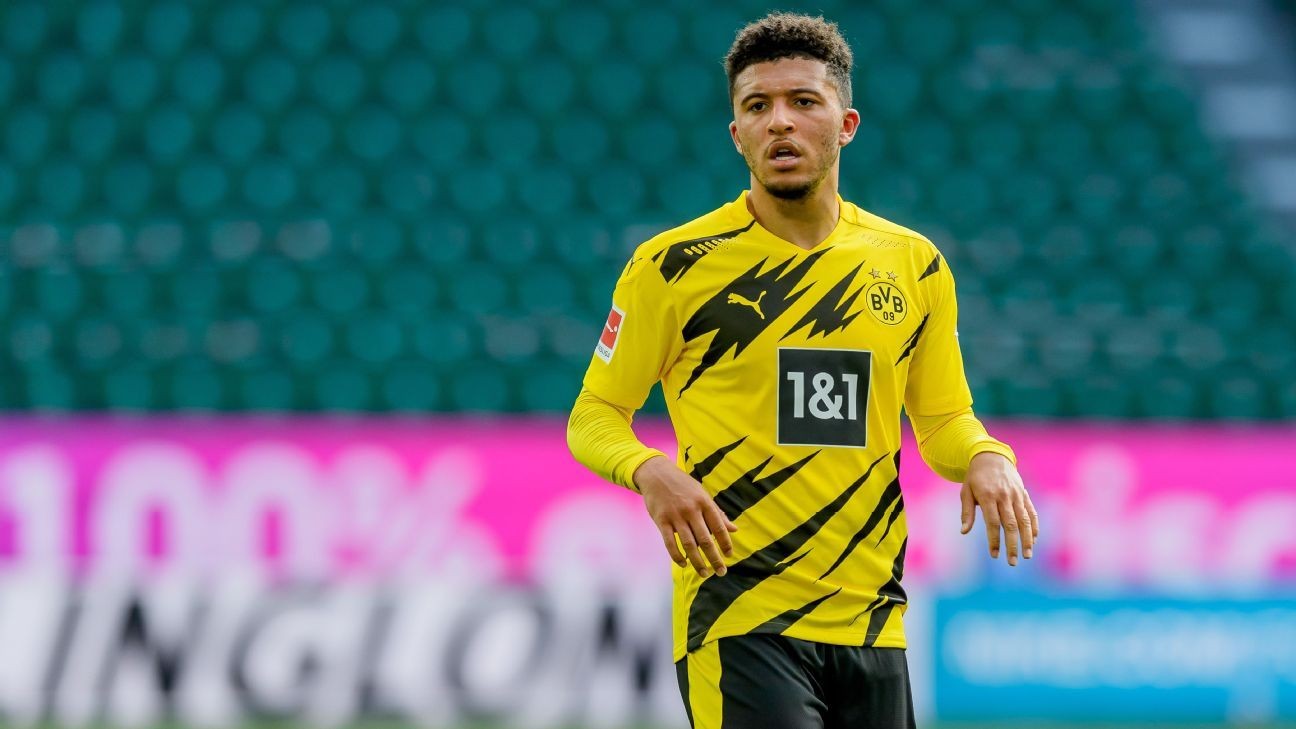 Chelsea are believed to be stepping up their pursuit of Jadon Sancho by offering £80 million for the Borussia Dortmund winger, reports the Sun.

When does the transfer window re-open? Premier League, Serie A, La Liga, Bundesliga, Ligue 1Transfer dominoes: How could one big move impact the window?Who are the 39 best male players age 21 or under?

Blues boss Thomas Tuchel is believed to be a huge fan of the 21-year-old winger, and Chelsea are now expected to lead the race to sign the England international.

Sancho is set to leave Germany this summer and he has his heart set on a return to the Premier League.

Manchester United have been tracking Sancho for over a year, but as yet have been unable to match Dortmund's valuations.

Sancho is said to be a boyhood Chelsea fan and though he wants to focus on a strong end to the season with Dortmund, he's keen to be nearer friends and family in England when the new season kicks off in August.

Dortmund are resigned to losing their talented winger, but are said to be hoping he has a successful Euro 2020 in an effort to recoup the best value for one of their biggest recent success stories.

Sancho has recovered from a slow start to the season and has scored eight goals and offered 13 assists for the yellows.

- Defeated FA Cup finalists Chelsea are believed to be keeping an eye on Wolfsburg centre-back Maxence Lacroix, according to Sky Germany's Max Bielefeld. He believes Chelsea officials have made contact with the 21-year-old's representatives. Lacroix has recently turned down Wolfsburg's new contract offers, and though the club would like to keep him they may be forced to settle for recouping a fee of around €30m.

- Sky Sports believes a bidding war is about to start for goalkeeper Dean Henderson, who they believe could be heading for the Old Trafford exit door this summer. David de Gea was preferred to Henderson for United's 1-1 draw with Fulham, with Henderson's long run as United's No.1 seemingly at an end. It remains to be seen who will now start for United in the Europa League final against Villarreal next week, but the 24-year-old's future now hangs in the balance. Sky believes a host of top clubs look set to battle it out for his signature, with Tottenham Hotspur, AC Milan, Chelsea and Borussia Dortmund all said to be interested.

- Uruguaya source Trepasos have followed last week's claim that Manchester United are interested in signing Mauro Arambarri by suggesting the Red Devils are about to make an offer in the next few days. The 25-year-old midfielder is seen as an alternative to Declan Rice in the defensive midfield position, and at a fraction of the price. Arambarri's contract at Spanish side Getafe runs out in 2023, and he could be available for around just over £20m.

- Arsenal midfielder Willian is eyeing a move to Florida as part of Inter Miami's summer recruitment drive, according to the Sun. Miami boss Phil Neville is keen to move on Rodolfo Pizarro to make way for the 32-year-old Brazilian, who has had a torrid time at Arsenal since joining from Chelsea last summer. The sticking point could be Willian's wages, but Miami are keen to add a player they see as a marquee signing.

- Arsenal could make a move for Barcelona's outgoing goalkeeper Neto as the Londoners look to replace Bernd Leno for the new season. That's from Mundo Deportivo, which adds that Brazilian Neto is contracted to the Catalan club until 2023 but it is widely believed he'll play his last game, against Eibar at the weekend. The 31-year-old joined Barca from Valencia in 2019 and while Arsenal failed with a loan move in January, they're hoping to experience more joy by returning with a more permanent solution this summer.