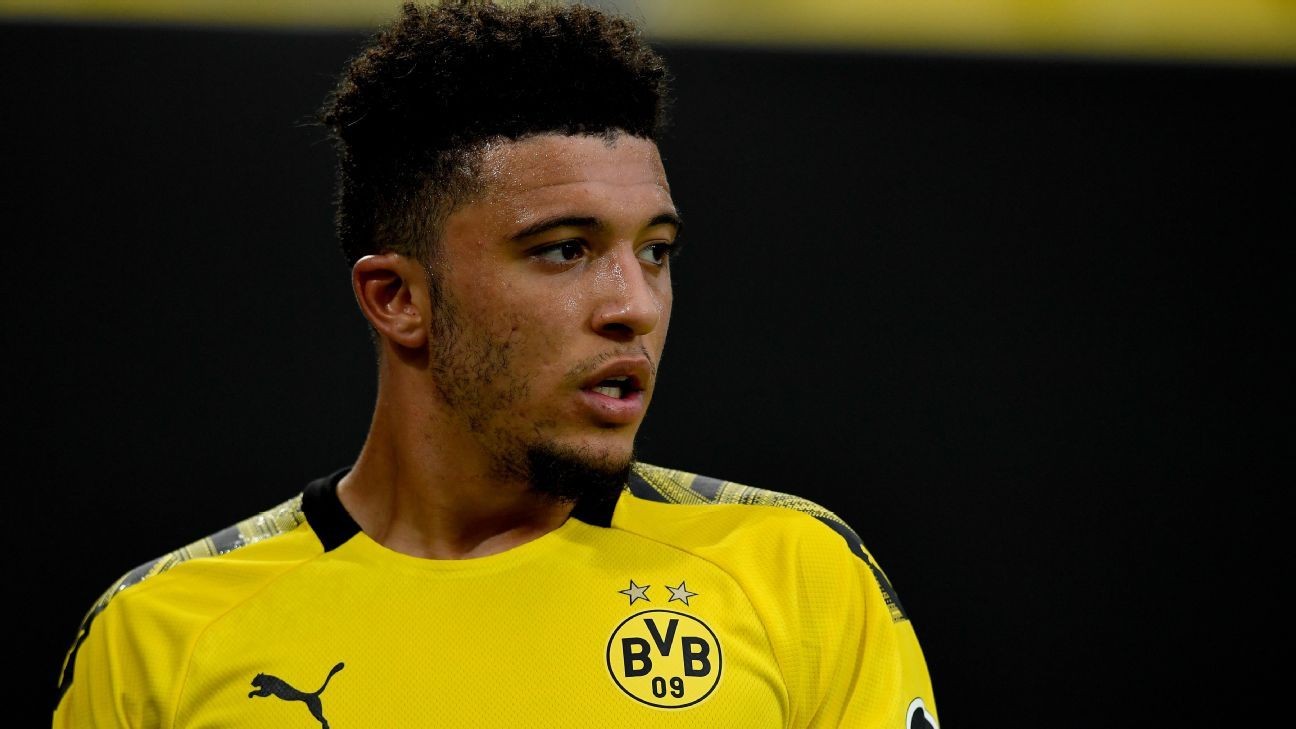 TOP STORY: Man United will only pay £50m for Sancho

Manchester United have been tracking Borussia Dortmund winger Jadon Sancho for some time, but Sky Sports is reporting that they will only pay as much as £50m for the 20-year-old.

Sancho has become one of the most sought-after players in Europe after moving to Germany from Manchester City's youth team for a paltry £8m in 2017. Dortmund valued him at around £100m before the coronavirus pandemic took hold and now his price is dropping by the day as his contract expires in 2022.

Bayern, Real Madrid, PSG and every top club in Europe are monitoring Sancho but the report states: "United remain the strong favourites to agree a deal but officials behind the scenes at Old Trafford believe Dortmund's valuation does not sufficiently reflect the costly fallout from the coronavirus pandemic and must be cut substantially if a deal is to be reached."

As £100m to £50m is a big drop, Dortmund won't want to play ball at that price. Though somewhere around that fee next summer might do the trick.

14.10 BST: Barcelona's sale of Arthur Melo to Juventus, with Miralem Pjanic going the other way, was a business move for all the wrong reasons, writes Sid Lowe.

play1:22'It's too late' to criticise Griezmann's move to Barcelona

Julien Laurens stresses the importance of Antoine Griezmann and Barcelona "making it work" amid his struggles.

13.43 BST: Liverpool manager Jurgen Klopp says he does not expect to spend heavily in the transfer window ahead of next season and sees a bright future for several youngsters looking to break into a strong main squad.

"COVID has influenced both sides with ins and outs, that is completely normal, and it's just not likely that it'll be the most busy summer in the world," he told reporters. "We can't spend millions and millions because we want to, or we think it's nice to do. We never wanted that.

"The problem with a strong squad is how do you improve a strong squad in the transfer market? You have to be creative ... We try to find solutions internally and there's still a lot to come. We have three or four players who can make big steps."

13.00 BST: Arsenal head coach Mikel Arteta has confirmed William Saliba will extend his loan with Saint-Etienne because the defender has "earned the right" to play in the Coupe de France final next month.

The 19-year-old was due to return to north London on Tuesday after his temporary deal expired, having originally been sent back to Saint-Etienne on a season-long loan following his £27m move to the Gunners last summer. However, Saint-Etienne face Paris Saint-Germain in the domestic showpiece on July 24 and Arteta said: "I think he needs to stay there. We've got an agreement with Saint-Etienne, he's been over there all year. He has earned the right to play in that final if the manager wants to do that. I think we have to give him the opportunity to do that, to enjoy that and we can have him after that."

Arsenal agreed the deal to sign Saliba when Unai Emery was head coach and Arteta, who replaced Emery in December, revealed he has met with the centre-back on several occasions in preparation for next season.

The Gunners have endured another campaign blighted by defensive issues -- the only team in the Premier League top 10 to have conceded more goals than Arsenal (41) is Burnley (45). But Arteta warned against fans anticipating the teenager to excel immediately, especially given he missed three months of the campaign with a foot injury in addition to a hamstring problem sidelining him in August.

"I spoke with him a few times," added Arteta. "He has been around a few times here as well. We have been following his season. As a young player, he had a difficult season with injuries that he had but it is part of his process.

"I know how high the expectations are on him for next year but we have to bear in mind the age that he's at and what he has done in the past, and make sure we create the right environment for him so he can keep going as a player."

Milik, 26, has impressed in Italy and attracted the attention of Atletico Madrid. The Poland international has one year remaining on the deal he signed in 2016, so his price is dropping, and Mourinho is reportedly set to swoop.

Tuttosport claims Napoli aren't interested in a sale, but adding Moura to the pot could sweeten the deal/

12.02 BST: Real Madrid are letting one of the world's best young full-backs leave for Inter Milan.

Cucurella, 21, had spent the season on loan at Getafe and the Madrid-based club have decided to take up an option that allows them to make the deal permanent. Barca will also receive 10% of any future sale.

A left-back by trade, Cucurella has made the majority of his 39 appearances for Getafe this season as a midfielder -- as he did on loan at Eibar last year. The sale will be included on Barca's accounts for the 2019-20 season, which closes on June 30.

ESPN reported in May that the club needed to bring in around €70m in player sales before the end of June.

This week's departures of Arthur Melo to Juventus in a deal worth up to €82m, and now Cucurella, will allow the club to breathe a little easier as they deal with the financial losses caused by the coronavirus pandemic.

10.35 BST: RB Leipzig are doing what they do best in the transfer market to get into shape for the new season. According to a report, the Bundesliga side have reached an agreement with FC Salzburg (which should be easy, given they are owned by the same company) over the transfer of attacker Hwang Hee-Chan.

The 24-year-old South Korea international has also been linked with Liverpool and Wolves, but now is headed down the well-trodden path between the German and Austrian clubs.

09.47 BST: Barcelona youngster Marc Jurado has confirmed his departure from the Catalan club after running down his contract ahead of a move to Manchester United this summer.

ESPN revealed in May that Jurado, who has been at Barca for almost a decade, had turned down several offers to stay at Camp Nou in favour of a switch to the Premier League club.

The right-back's non-professional terms expired on June 30 but he has been eligible for a professional contract since he turned 16 in April. Barca offered him a three-year deal that would have been worth €100,000 annually by the end of the contract, with a €200,000 bonus included if he made his debut for the B team. However, Jurado turned down the chance to stay with the club and will instead try his luck in England with United, who will only have to pay development rights as he is out of contract.

09.23 BST: It's widely reported in Italy that Achraf Hakimi will undergo a medical in Milan today before signing a five-year contract with Inter Milan.

Real Madrid have reportedly accepted Inter's €40m offer, plus €5m in add-ons, for the Morocco international. The deal will not include a buy-back option for Madrid but will allow the Spanish giants the possibility to equal any future offer for the 21-year-old right-back.

Achraf has played on loan at Borussia Dortmund for the past two seasons. He has scored five goals and set up 10 more in 33 league appearances this season.

08.54 BST: Sky Italia reports that Inter Milan have reached an agreement with Chelsea and Manchester United to extend the loan deals of Victor Moses and Alexis Sanchez until the end of the Serie A season.

However, the agreement will only apply to Serie A and not the Europa League. United are still on course to win the Europa League and will take a few more weeks to decide whether or not to allow Sanchez to remain in Milan until the end of August.

Inter will reportedly not exercise the option to buy Moses from Chelsea this summer. The Nigerian defender moved to Inter in January and has made six league appearances.

However, Inter have not ruled out the possibility of extending Sanchez's loan spell for a further season and including in the deal a buyout option to be made effective in the summer of 2021. Sky Italia reports that Inter CEO Giuseppe Moratta and Inter sporting director Piero Ausilio are working on it, despite the fact that an ankle injury has limited Sanchez to just one goal in 19 appearances for Inter.

08.30 BST: Atletico Madrid have pulled out of the race to sign PSG striker Edinson Cavani, Diario AS reports.

The Uruguay forward's contract expires this summer and, according to his brother, he has many offers on the table. The Rojiblancos tried but failed to lure Cavani to Madrid in the winter transfer window as his wage demands were considered too high for the Spanish club, which has now turned its attention to signing Napoli's Polish forward Arkadiusz Milik.

According to AS, Roma are front of the queue to sign Cavani and are willing to offer the 33-year-old a three-year contract while making him the highest paid player in the squad. Inter and Manchester United are also reportedly interested in the former Napoli star.

Cavani, who joined PSG from Napoli in 2013, is the fourth highest paid player at PSG behind Neymar, Kylian Mbappe and Thiago Silva.

Julien Laurens explains Matteo Guendouzi's situation at Arsenal after he was left out of their FA Cup squad.

Arsenal and Newcastle United are just two of several Premier League clubs chasing the signature of Wolfsburg striker Wout Weghorst, according to a report by Bild.

The report states that the 27-year-old Dutch international will be available for about €35 million after a campaign that saw him score 16 goals and provide three assists in the Bundesliga.

The Independent reports that Chelsea are prepared to make a move for Manchester United midfielder Angel Gomes once he leaves the club.

United boss Ole Gunnar Solskjaer has all but confirmed the 19-year-old will leave Old Trafford when Gomes' contract expires on Tuesday, after the England under-20 international rejected the Red Devils' £25,000-a-week contract offer, and now it appears as if there is potential for the Blues to swoop in and sign the attacking midfielder to a contract described as "persuasive."

The teenager is said to have offers on the table from a handful of clubs across world football, with Chelsea among Valencia, Benfica and Hamburg in the leading sides chasing Gomes' signature.

Hakimi, who has spent the past two years on loan at Borussia Dortmund, has been unable to convince Zinedine Zidane that he can dislodge Dani Carvajal as the first-choice right-back at the Bernabeu. As a result, he's now on the verge of completing a move to Inter Milan, with the Red Devils being left in the dust.

The report states that in addition to United, Bayern Munich also made an offer for Hakimi, but the Westfalenstadion veteran ultimately opted for a move to the San Siro.

- Leicester City youngster Dennis Gyamfi is set to leave the club on when his contract expires on Tuesday, the Leicester Mercury reports. The young Dutchman has stunned the Foxes with his decision to leave, with the club expecting him to sign a new deal and potentially work his way into the first team. A new contract had been offered to the 18-year-old, but in the end, he decided that his future lies elsewhere.

- The Daily Mail writes that Newcastle United are contemplating a move for young Montpellier forward Thomas Robert -- the son of former Magpies star Laurent Robert. Newcastle are one of many teams monitoring his situation after the 19-year-old turned down a new three-year contract with the French club, with Nice and Rennes both making offers to keep him in Ligue 1.