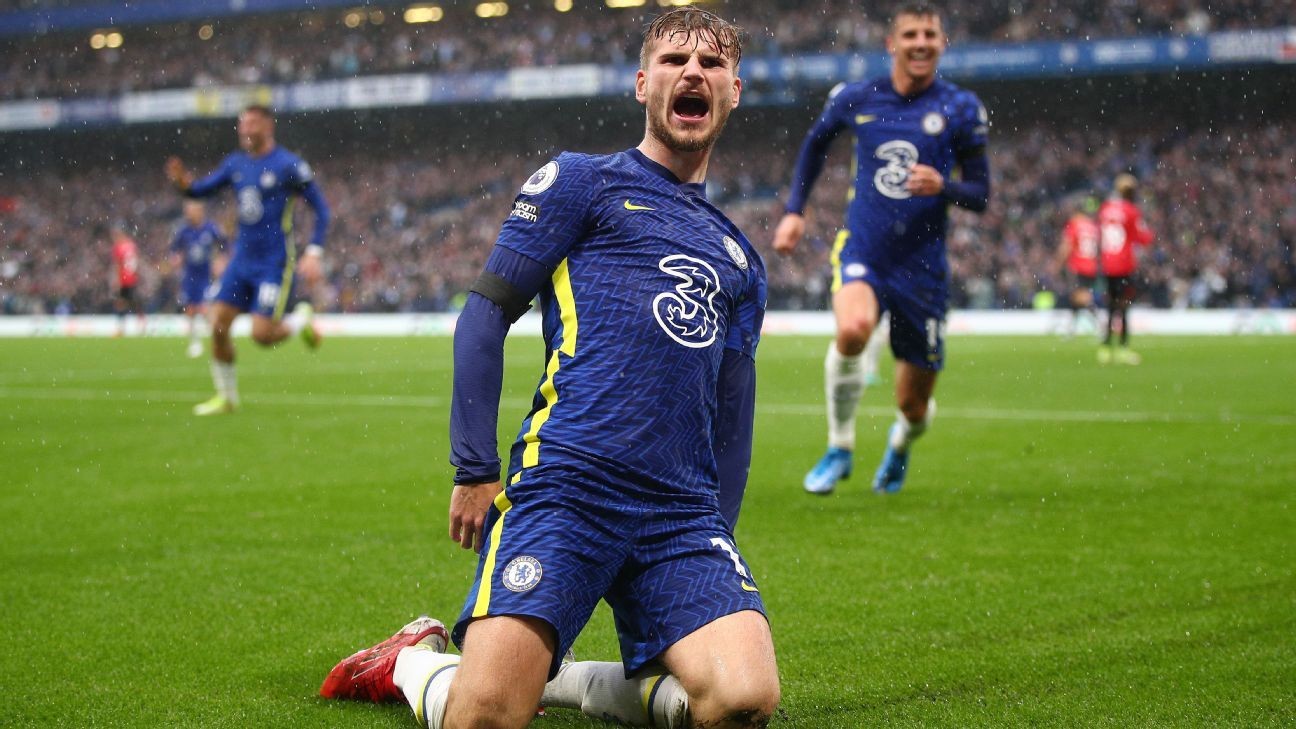 Timo Werner spent the bulk of his career in the Bundesliga, and appears set to go back after two seasons in the Premier League. Chris Lee - Chelsea FC/Chelsea FC via Getty Images

Timo Werner is on the verge of a permanent move to his former club, RB Leipzig, and he could return as quickly as Monday, according to Sky Sports Germany.

The impact of Messi's Barcelona exit, one year later17hSam Marsden and Julien LaurensWhat do the big Premier League clubs have to sort before transfer deadline?5dESPNBarca signing Kounde ahead of Chelsea is a coup for the club and LaLiga6dGraham Hunter

Talks between Chelsea and Werner's former club have been ongoing for the last couple of days, and Werner is reportedly keen to make a dramatic return to the Bundesliga. The fee is believed to be around €30-35 million.

Werner left Leipzig two years ago after scoring 95 goals -- 34 in 45 matches in his last season -- and 40 assists in 159 appearances. And despite interest from Juventus this summer, the 26-year-old hitman looks set to leave Chelsea after a summer of uncertainty.

Werner has scored 23 goals in 89 matches for the Londoners but is behind Raheem Sterling in the pecking order, and isn't guaranteed game time despite the departure of Romelu Lukaku to Inter Milan.

Werner was left out of Chelsea's starting lineup in the 1-0 opening day win against Everton, with Thomas Tuchel instead opting for a forward line of Kai Havertz, Mason Mount and Sterling.

08.00 BST: Former Manchester United forward Wayne Rooney has said that the club must let Cristiano Ronaldo leave if they are to build a successful team for the future under new manager Erik ten Hag.

The 37-year-old Ronaldo, who re-signed for United from Juventus last season, told United earlier this summer that he wants a move away from Old Trafford after the team's failure to qualify for the Champions League.

"I think United should let Cristiano Ronaldo go. It's not that Ronaldo can't play in a Ten Hag team. He can play in any team," Rooney, who now manages Major League Soccer side DC United, wrote in a column for The Sunday Times.

"Ronny will always score you goals. But my personal view is that United aren't ready to challenge for the title now, so the aim has to be to build a team that can win the league in the next three to four years, and you have to plan for that."

Ronaldo was a second-half substitute in United's first match of the Premier League season, a 2-1 home defeat to Brighton & Hove Albion.

- Wolverhampton Wanderers have agreed a deal worth £35m for the signature of Valencia striker Goncalo Guedes, according to the Daily Mail. The 25-year-old forward pulled out of Valencia's friendly with Atalanta and is instead believed to be flying to England with a view to completing his medical and signing a contract at Molineux on Monday. The fee is believed to be an initial £27.5m with add-ons. Guedes can play as a winger or as a second striker. He scored 36 goals in 178 appearances for Los Che.

- Borussia Dortmund have been searching for a replacement for striker Sebastien Haller, and Sport1 report they're close to signing French striker Anthony Modeste from FC Koln. Dortmund have been linked with a whole host of names since the news that Haller must undergo treatment for testicular cancer, including Edinson Cavani, Edin Dzeko and Marcus Thuram. However, it appears Dortmund have an agreement in place to take 34-year-old Modeste to the Signal Iduna Park for a fee of between £3.4m and £4.2m. The striker will pen a one-year deal worth £5m.

- Napoli midfielder Fabian Ruiz is refusing to sign a contract extension, and Paris Saint Germain are hoping to capitalise on the uncertainty by working on a deal worth £21m, according to L'Equipe. The 26-year-old Spaniard has one year left on his deal, and though Real Madrid are interested in landing him for free next summer, the French champions believe they can get a move pushed through this summer. PSG are hoping to lower Napoli's asking price, but they're keen to bolster their midfield attacking options. Ruiz didn't feature in Napoli's pre-season match against Espanyol over the weekend.

- Everton are expected to beat West Ham United to the signing of Wolverhampton Wanderers defender Conor Coady, according to the Daily Mail. The 29-year-old Wolves and England skipper is keen to leave Molineux, and the Toffees could secure his services for a fee of £12m. Everton's defensive ranks were depleted on the opening day of the season as a result of injuries to Ben Godfrey and Yerry Mina, and Everton boss Frank Lampard is a long-term admirer of Coady, who was an unused substitute in Wolves' 2-1 defeat to Leeds on Saturday. Coady is keen to play regularly in an effort to bolster his World Cup chances.