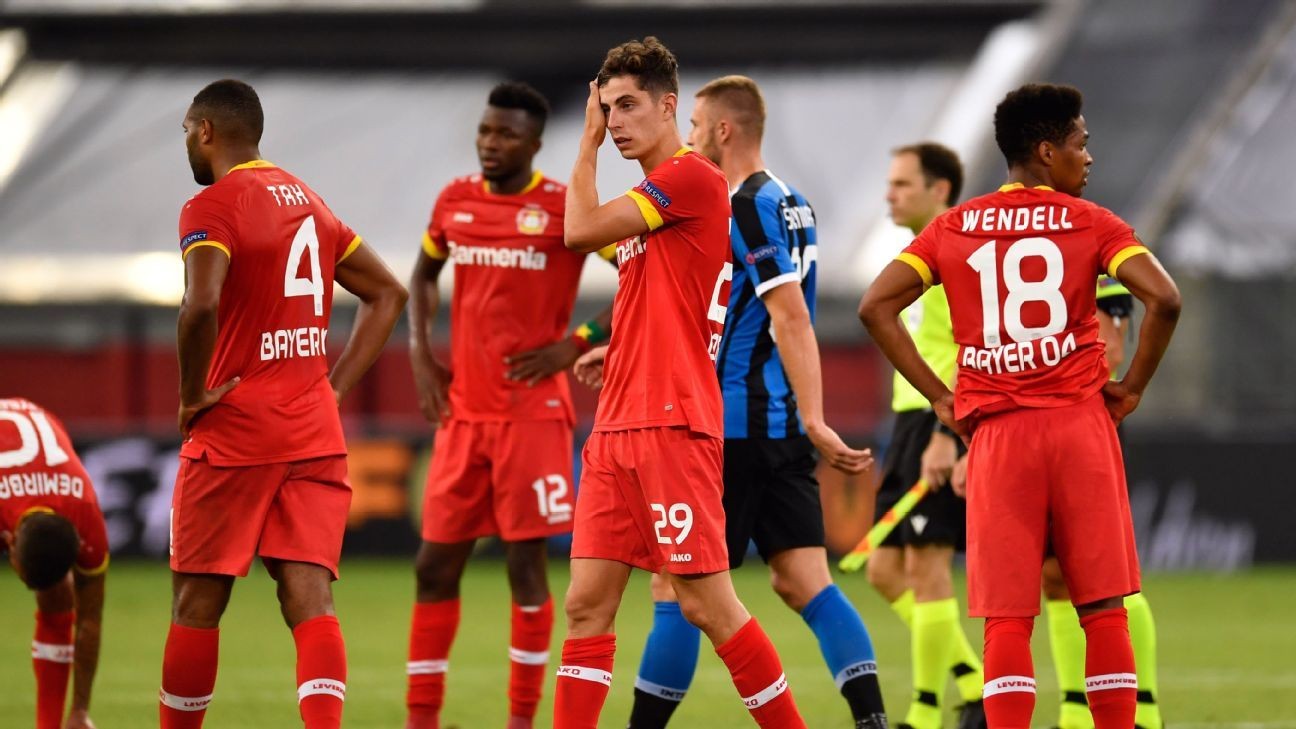 Chelsea closing in on Havertz

Chelsea are finally said to be closing in on Bayer Leverkusen star Kai Havertz following the Bundesliga side's Europa League exit at the hands of Inter Milan on Monday night.

Speculation earlier in the day had suggested the Blues had agreed a deal with the player, reported by the Evening Standard as "desperate" to join the Blues ahead of the new season.

Leverkusen sporting director Rudi Voller has been vocal about his desire to keep hold of the impressive 21-year-old in recent weeks, with Die Werkself adamant that Havertz would not leave before the conclusion of the club's Europa League campaign.

That came sooner than Voller may have hoped following Monday's 2-1 defeat -- a result which could seal Havertz' departure.

According to the Standard, all that remains is for Havertz to agree personal terms with Frank Lampard ready to splash out £70 million for his signature.

Havertz, described by Leverkusen manager Peter Bosz as the best player to ever play for Leverkusen, ended a fine campaign by netting his side's only goal in Monday's loss.

Inter Milan may have done Chelsea a huge favour on Monday by knocking Kai Havertz's Leverkusen out of the Europa League. Marius Becker/Picture AllianceChelsea to battle Barca for Ajax's Tagliafico

In other Chelsea news, the Blues have expressed an interest in bringing Ajax left-back Nicolas Tagliafico to West London, but Lampard's side face strong competition from Spain.

Sky Sports has identified the Stamford Bridge outfit as one of three clubs who want to sign the defender, with La Liga duo Barcelona and Atletico Madrid ready to provide stern competition.

Tagliafico, 27, has been capped 25 times by Argentina, while Chelsea have already snapped up one Ajax player this season in Hakim Ziyech.

Lampard is also said to be monitoring Real Madrid's Sergio Reguilon following a successful loan-spell with Sevilla, having failed to strike a deal with Leicester for Ben Chilwell; although the Foxes are now believed to be willing to drop their original £80m asking price.

Newcastle join the race for Sessegnon

The Sun reports that Newcastle United have become the latest club to set their sights on Tottenham's 20-year-old starlet Ryan Sessegnon.

Newly promoted Fulham, who Sessegnon left to join Spurs last summer, have also been linked with the winger in recent days.

Newcastle boss Steve Bruce is expected to find himself working on a tight budget -- reportedly just £30 million -- ahead of the new campaign following a failed takeover attempt.

And Bruce is now expected to turn his attention to homegrown talent where he believes there are bargains to be had.

Sessegnon made just 12 appearances for Spurs in all competitions this season, scoring once -- a consolation goal in a 3-1 Champions League defeat to Bayern Munich.

- Juventus' transfer list could offer up a veritable who's who of international superstars this summer. The Mirror reports that Aaron Ramsey, Gonzalo Higuain, Sami Khedira, Daniele Rugani and Mattia De Sciglio will all be shown the door by new boss Andrea Pirlo.

- The Sun reports that Brighton boss Graham Potter is prepared to let one centre-back leave the club, but not the man on everybody's lips. Potter is standing firm over the in-demand Ben White, but is said to be willing to let Shane Duffy leave the club following interest from West Bromwich Albion.