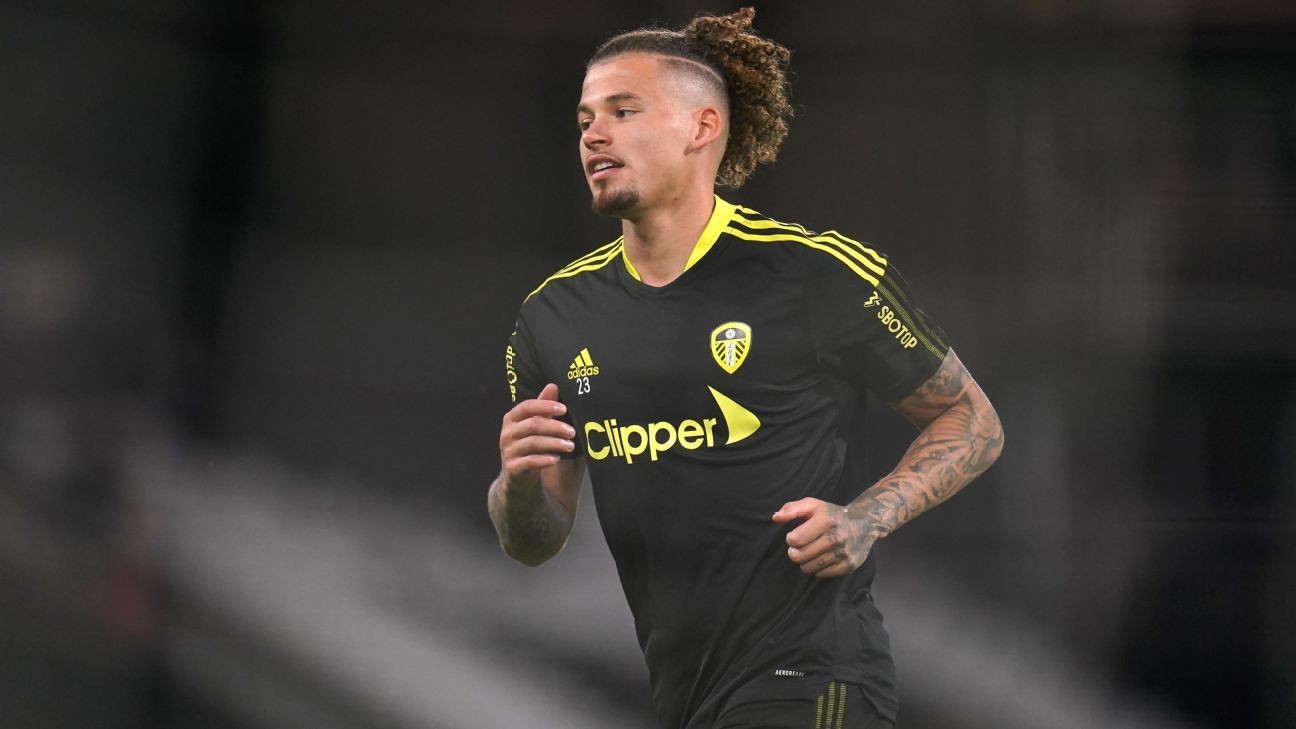 Kalvin Phillips has been linked with a move away from Leeds United ever since he starred for England at Euro 2020. Andrew Matthews/PA Images via Getty Images

TOP STORY: Liverpool ahead of Man United in Phillips chase

The 25-year-old has impressed for both Leeds and England in recent months -- especially during the 2020 European Championships -- which has risen his profile among the top clubs in Europe.

Leeds are hoping to keep hold of the academy graduate, who has gone on to become a talismanic figure, but are aware that attention from some of the country's biggest clubs could lure Phillips away from Elland Road.

It is reported that Phillips wouldn't want to join the Red Devils, as having grown up a Leeds fan and come through at the club, he worries about what that move would do to his family -- it would also likely ruin his legacy at his footballing home.

This means the midfielder would rather join Liverpool if he was to depart Elland Road. Even that is not necessarily a certainty, though, as Leeds have opened talks in a bid to keep Phillips, whose contract already runs until 2024.

However, if Phillips does eventually leave Leeds, it seems as though Old Trafford bosses have very little chance of signing their favoured man -- surely another victory for Liverpool after their recent 5-0 win on the pitch on Sunday.

Real Madrid manager Carlo Ancelotti reacts to the news of Ronald Koeman being sacked by Barcelona.

08.00 BST: Only one place to start this morning as there was a big change in the soccer world -- Barcelona have sacked coach Ronald Koeman following Wednesday's 1-0 LaLiga loss to Rayo Vallecano (stream the replay on ESPN+ in the U.S.), their third defeat in their last four league games.

Following Koeman's exit, sources have told ESPN's Sam Marsden and Moises Llorens that the club will open talks with Xavi Hernandez on Friday regarding the vacancy, with the former team captain now the first choice.

However, the same sources add that Barca don't expect to have a replacement in place until after the November international break. An interim coach is set to take charge of the next three games against Alaves, Dynamo Kiev and Celta Vigo.

Koeman's position had been seriously weakened after poor results prior to the October international break, with back-to-back defeats against Real Madrid and Rayo this week proving to be the tipping point.

- Hunter: Koeman firing was inevitable, and Barca remain a shambles

- Bayern Munich are looking to sign Victor Osimhen, who already has nine goals and an assist in 11 matches across all competitions for Napoli this season, reports Calciomercato. However, Napoli are only willing to discuss offers over €100 million and are looking for around €120m, while Aurelio De Laurentiis wouldn't even sit down to talk for an offer of €80m. With the Nigeria international's contract running until 2025, they will not be pushed around.

- Paris Saint-Germain will look to sign Leeds United winger Raphinha after receiving a glowing reference from national teammate Neymar, according to TeamTalk. Liverpool had already been interested in the winger, but PSG are looking for new faces with the knowledge that Kylian Mbappe could leave during the summer. So, it seems as though Raphinha is now one of those being considered.

- Juventus have joined many of Europe's largest clubs in showing interest in FC Salzburg forward Karim Adeyemi, writes Calciomercato. Fellow Serie A giants Internazionale have already been looking at the Germany international, who is also wanted by Bayern Munich, Borussia Dortmund and RB Leipzig in his homeland, while Premier League clubs are also interested.

- Arsenal are interested in signing Borussia Monchengladbach midfielder Denis Zakaria, as has been reported by Sport Bild's Christian Falk. The Switzerland international's contract ends in the summer of 2022, meaning he'll be available as a free agent. AS Roma and Juventus are among the other clubs who have been linked.