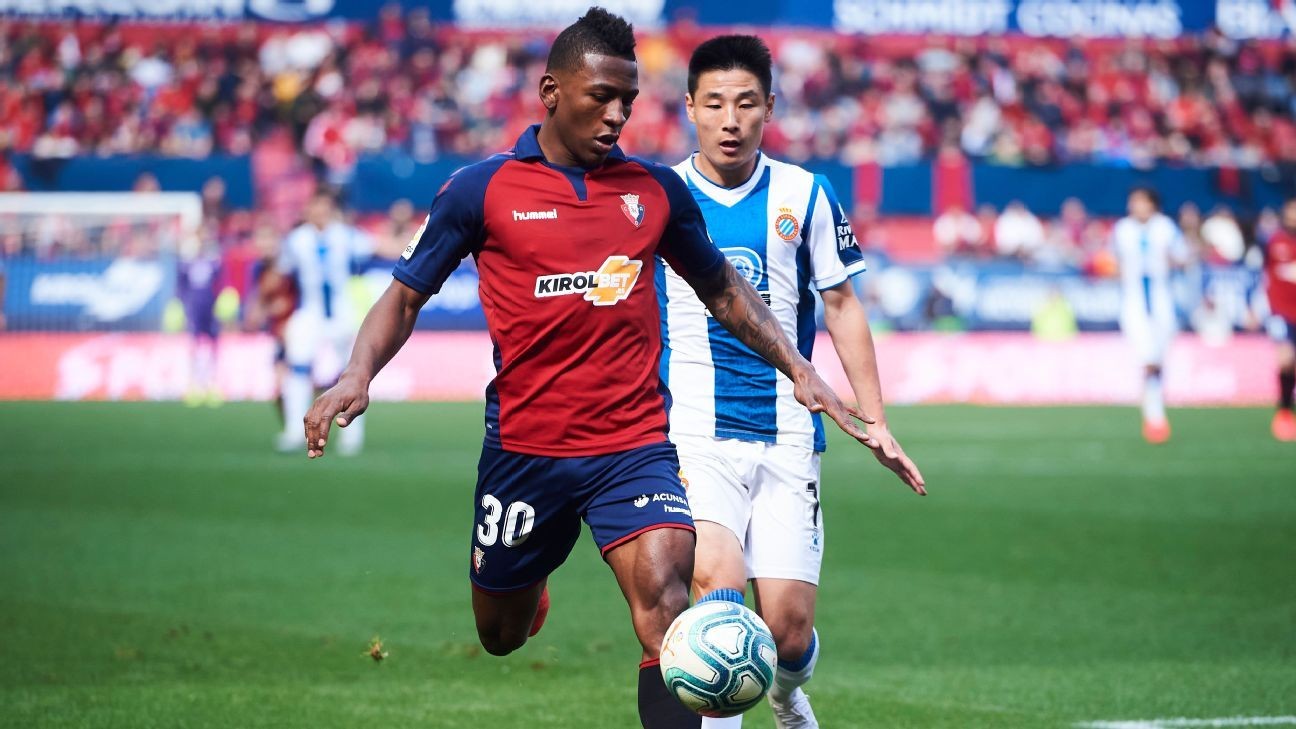 Watford defender Pervis Estupinan is in demand, and while Tottenham Hotspur, Barcelona and Atletico Madrid are reported to have joined the race for his signature, the Express believes Manchester United lead the way.

How soccer scouting, budgets during coronavirus could impact transfer marketWhy Werner's move to Chelsea is a warning to LiverpoolBarcelona want to sell Coutinho, but why does no top club want him?

Estupinan is currently on loan at Osasuna from Watford and the Spanish side has the option to buy him for £9 million. However, should they decide against taking up that option, the defender will return to Watford, where he is yet to play a first-team game despite joining the club in 2016.

The once-capped Ecuador international has been on loan at Granada, Almeira, Mallorca as well as Osasuna. This season, he has made 30 appearances in all competitions scoring once against Valencia, and contributing a further five assists.

It's this form that has attracted interest across Spain and beyond, but the Express believes former United defender-winger and Ecuadorian compatriot Antonio Valencia could give Reds boss Ole Gunnar Solskjaer a helping hand in the transfer.

Barcelona are looking for a goalkeeper to complement no.1 Marc-andre Ter Stegen, and they've expressed an interest in Sporting Lisbon goalkeeper Luis Maximiano, according to Portuguese title A Bola.

Barcelona consider 21-year-old Maximiano a player for the long-term future. He joined Sporting in 2017 and is contracted to the club until 2023, but he would only cost around €16m.

Barca aren't alone in their admiration for the youngster, though, as AC Milan are also said to be interested. Neither club is said to have made an official move yet.

Barca hope to cash in on current No.2 Neto this summer and if so, could look to Portugal to replace him, or promote from within.

Paris Saint-Germain sporting director Leonardo has placed Sergej Milinkovic-Savic at the top of his summer wish list, but he faces competition from Europe's top clubs, according to Corriere dello Sport.

The Serbian midfielder has been top of Leonardo's shopping list all summer and he has already seen a bid of €60m refused.

And now PSG aren't alone in their interest. Real Madrid were already said to be monitoring the situation, and now Juventus, Barcelona and Manchester United are also in the hunt.

Leonardo is hoping throwing Adam Marusic into the deal will give PSG an advantage over their rivals. With so many clubs interested, though, Lazio president Claudio Lotito is expected to demand the highest price, though he is reluctant to let one of his star assets leave.

-- Manchester United, Arsenal and Everton are looking to land a bargain in Lille teenager Joel Ngoya, according to France Football. Ngoya has been the star of Lille's youth squad this season and the 18-year-old has subsequently attracted interest from all over Europe, particularly from the Premier League. Ngoya is eligible to leave in the next two weeks after not having received an offer of a first-team contract as expected. German club Hoffenheim have offered him a five-year deal, while four French clubs are also said to be interested.

-- L'Equipe reports that Marseille are considering a move for the versatile Daler Kuzyaev from Zenit St-Petersburg. Kuzyaev is a free agent this summer, which suits Marseille's limited budget, and the player himself is keen to try his luck in one of Europe's top divisions, as well as playing Champions League football. He played 13 times in the Russian L1 as well as four Champions League matches. Valencia and Hoffenheim are also interested.