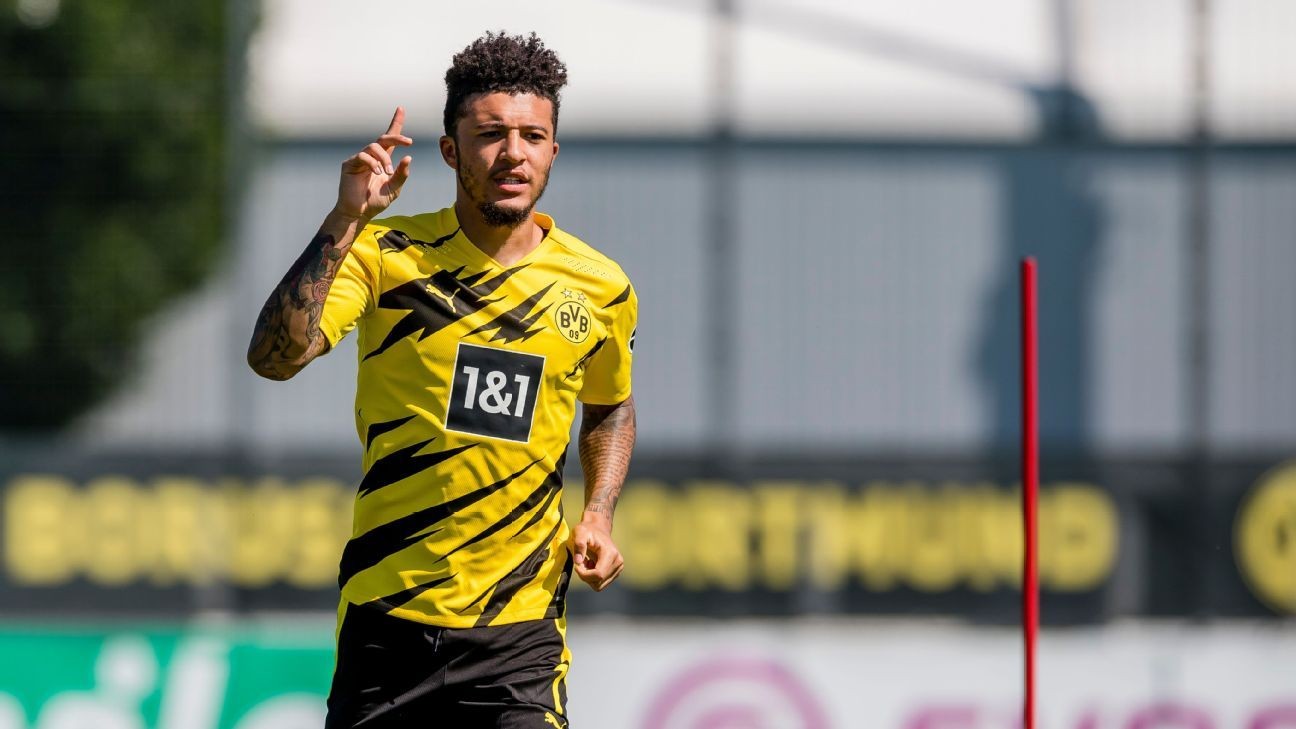 Manchester United's move for Jadon Sancho is in danger of collapsing, according to the Daily Mail.

The UK outlet claimed on Wednesday that Sancho's club Borussia Dortmund are becoming "increasingly bemused" by United's approach to negotiations and are consequently likely to cut ties concerning a possible deal.

The report says that Dortmund are yet to receive a bid or any indication from United regarding the starting point for fee negotiations -- adding to the German club's frustration.

All of this comes on the same day that Sancho told reporters he was happy at Dortmund and wanted to try to be a role model for the team following their 6-0 friendly win against SC Rheindorf Altach.

United's back-up business, including Wednesday's rumour that Ansu Fati is back on the Red Devils' radar, has also left Dortmund questioning the Premier League club's commitment to signing Sancho. Dortmund's demand of £108m for the England international appears to remain alive.

That's according to The Mirror, which reported on Wednesday that United are likely to step up their efforts to prize Grealish away from Villa should their attempt to sign Sancho from Borussia Dortmund prove unsuccessful.

The Mirror's report also states that Aston Villa co-owner Nassef Sawiris has slapped a whopping £80m price tag on the club skipper. Grealish has three years left on his deal at Aston Villa, which is thought to be worth around £65,000 a week, after helping his team survive a final day relegation battle to stay up.

- Paul Pogba's commitment to Manchester United could finally be written in black and white, with Sky Sports reporting that the midfielder is expecting the club to open contract talks once their Europa League campaign ends. Pogba, who has a year remaining on his current contract, was heavily linked to Real Madrid and Juventus last summer. But it would seem the 27-year-old now wants to commit his immediate future to United. Sky's Dharmesh Sheth claims Pogba is content at United and expects contract talks to open soon.

- The arrival of Pierre-Emile Hojbjerg at Tottenham Hotspur means young midfielders Oliver Skipp and Jamie Bowden will be sent out on loan next season, claims Football Insider. Jose Mourinho has reportedly been inundated with requests from Championship and League One clubs about the availability of both Skipp and Bowden.

- Despite having bids of £18.5m, £22m and £30m for Brighton & Hove Albion defender Ben White rejected, Leeds United will reportedly place an improved offer to the Seagulls. Football Insider claims the Premier League newbies are desperate to tie fan favourite White down to a deal at Elland Road after he impressed on loan with the Yorkshire club during their Championship winning campaign.