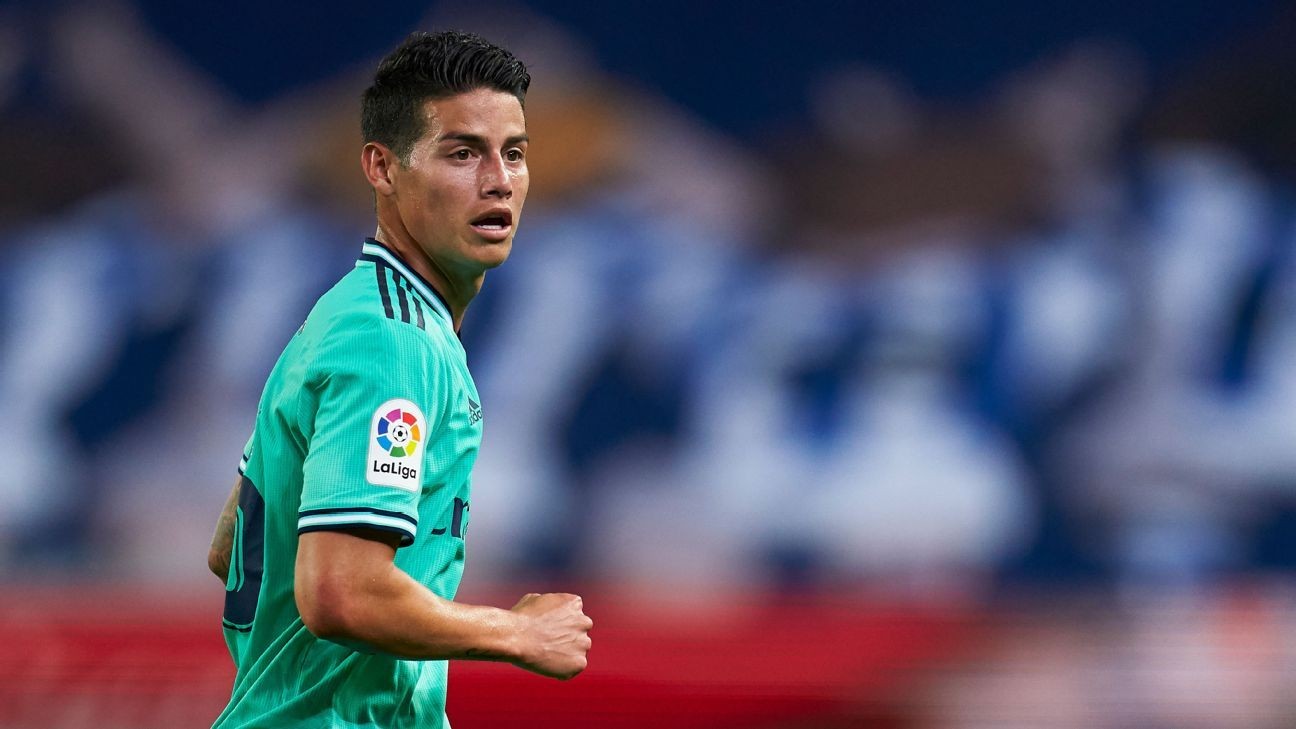 James Rodriguez has reportedly asked to leave Real Madrid, and the Blancos hierarchy are keen to secure a quick sale for the Colombia international in the next couple of months, rather than lose the attacking midfielder for nothing in the summer of 2021.

Marca says that there is no shortage of suitors for James, with both Napoli and Atletico Madrid being credited with a long-term interest in the 28-year-old.

However, the Spanish outlet believes that a move to the Premier League is more likely, with Everton, Arsenal, Manchester United and Wolverhampton Wanderers all believed to be keen on bringing the player to England.

One potential stumbling block amidst the coronavirus pandemic is the playmaker's wages, with James taking home more than €7 million a year -- a figure that will likely to put more prudent clubs out of the race this summer.

James Rodriguez could be appearing in the Premier League next season, but which club will stump up the cash? Pedro Salado/Quality Sport Images/Getty ImagesItalian trio do battle for Milik

Juventus, AC Milan and Roma are all believed to be in the running for Napoli striker Arkadiusz Milik, according to Calciomercato.

The 26-year-old's contract in Naples expires in less than a year's time, and the Poland international is believed to favour a move to Serie A title holders Juve, who have a glowing reputation for picking up top players at bargain prices.

Napoli chairman Aurelio De Laurentiis, on the other hand, would prefer to pursue negotiations with Roma, where he hopes to secure a swap deal that would see Giallorossi winger Cengiz Under head in the opposite direction.

Milik is reportedly seen by Roma officials as a possible long-term replacement for Edin Dzeko, who is just eight months short of his 35th birthday.

Calciomercato claims that AC Milan are closing in on the appointment of Ralf Rangnick as their new manager, and the German has reportedly identified two targets to bolster the Rossoneri frontline.

Rangnick's No. 1 target is Real Madrid misfit Luka Jovic, who has had a miserable spell in the Spanish capital after his big-money move from Eintracht Frankfurt a year ago. The Serbia international is well known to former Leipzig boss Rangnick, who hopes he can rekindle the 22-year-old's career with a switch to the San Siro.

The second name on Milan's shopping list is Patrik Schick, who is deemed surplus to requirements at Serie A rivals Roma, having spent the 2019-20 season on loan at Leipzig, where he netted 10 goals in 22 Bundesliga appearances.

- Australia international Daniel Arzani is on his way to FC Utrecht, according to AD. The Manchester City man has spent an injury-laden last two seasons on loan at Celtic and is now looking to get some much-needed game-time in the Eredivisie.

- Tuttosport reckons Napoli could be set to land highly-rated Lille forward Victor Osimhen, after the club's president hinted that Gennaro Gattuso's side was the Nigerian's preferred destination. The 21-year-old has netted 13 goals in 27 appearances for the Ligue 1 side since arriving from Belgian outfit Charleroi almost a year ago.

- Turkish giants Fenerbahce have enquired about the availability of Barcelona duo Jean-Clair Todibo and Moussa Wague, with a view to a double loan swoop for the pair next season. Sport says neither 20-year-old Todibo nor 21-year-old Wague look likely to break into the Barca first team next year, so look set to continue their development elsewhere.

- Calciomercato claims Fiorentina striker Giovanni Simeone could be set for a move to a fourth Serie A club in as many years, with Bologna reportedly keen to secure the 24-year-old's signature. The Argentine has scored 10 goals on loan at Cagliari this season, and La Viola are asking for around €20m from interested parties.