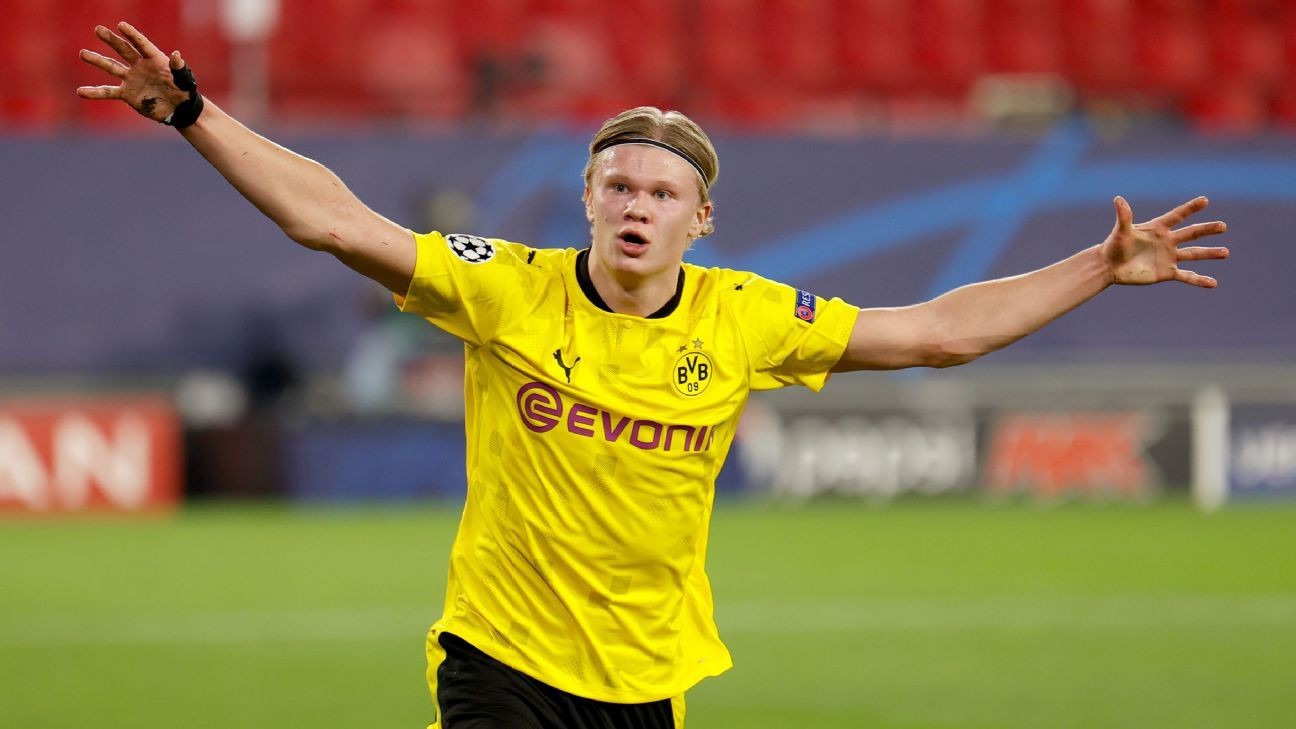 Manchester City are keen to sign Erling Haaland from Borussia Dortmund as a replacement for Sergio Aguero, according to Bild.

Aguero has been in and out of the City side because of injury and it looks as though his time at the club could be coming to an end. And Pep Guardiola would like to replace the Argentine striker with the 20-year-old Norwegian.

However, City aren't alone in their interest in Dortmund's clinical striker. Real Madrid are also planning for the future, and they're in particular a long-term replacement for Karim Benzema.

Bild suggests that Haaland would be tempted by Madrid, and possibly City, and that both options would be more preferable to Bayern Munich or Chelsea, who have also been linked with a move for him.

When Haaland leaves the club depends on Dortmund's end to the season. If they can qualify for the Champions League, Haaland could be tempted to stay until 2022. If not, it's likely he'll look to leave ... and he won't be short of suitors.

Juventus boss Andrea Pirlo is looking for a top young midfielder for next season, and Lyon stay Houssem Aouar tops his wish list, according to Calciomercato.

Aouar has been tracked by a number of clubs in the last two seasons, including Manchester City, Arsenal and, of course, Juventus. The Bianconeri have been heavily linked with the Frenchman before and they missed out on his signature last summer.

Juve were impressed by Aouar after he helped Lyon dump them out of the Champions League last season, and they were prepared to offer three players in an effort to get him.

Lyon rejected their advances, but Juve will look to try again this summer and though they will face a lot of competition, including Arsenal who look likely to return with a bigger bid than the one that was rejected last summer. Juve's long-term interest could give them an advantage.

Liverpool could reignite their interest in Sporting Lisbon defender Nuno Mendes, according to O Jogo.

The Portugal title believes Liverpool, who saw a bid of £22m for the full-back rejected last summer, could have better luck this time around.

Mendes has been in good form for Sporting, currently top of the Portuguese league, which has prompted the league leaders to tie him to a new deal. However, such is the club's financial predicament that they could be forced to raise funds by selling players, including Mendes.

Mendes had a release clause of €70m written into his new contract, but Sporting could accept a lower fee in an effort to raise some much-needed funds.

As well as Liverpool, Juventus, Real Madrid and AC Milan are all tracking the defender.

- Arsenal are looking to replace Hector Bellerin with a more dynamic defender, and Brighton &Hove Albion's Tariq Lamptey is among Mikel Arteta's options, according to Fabrizio Romano on the Here We Go podcast. Romano says Lamptey is a target for the Gunners this summer, but that there are a number of other clubs also considering him as an option.

- Sporting Lisbon are looking are looking to make Joao Mario's loan move permanent in the summer, according to Record. Sporting have raced to the top of the Primeira Liga and Mario has more than played his part, which has prompted Sporting president Frederico Varandas to make "an important investment" to keep the player. It's clear Mario has no future under Antonio Conte, but Sporting may need to work out how they can afford to offer him similar wages to the €3m he gets annually at the San Siro.