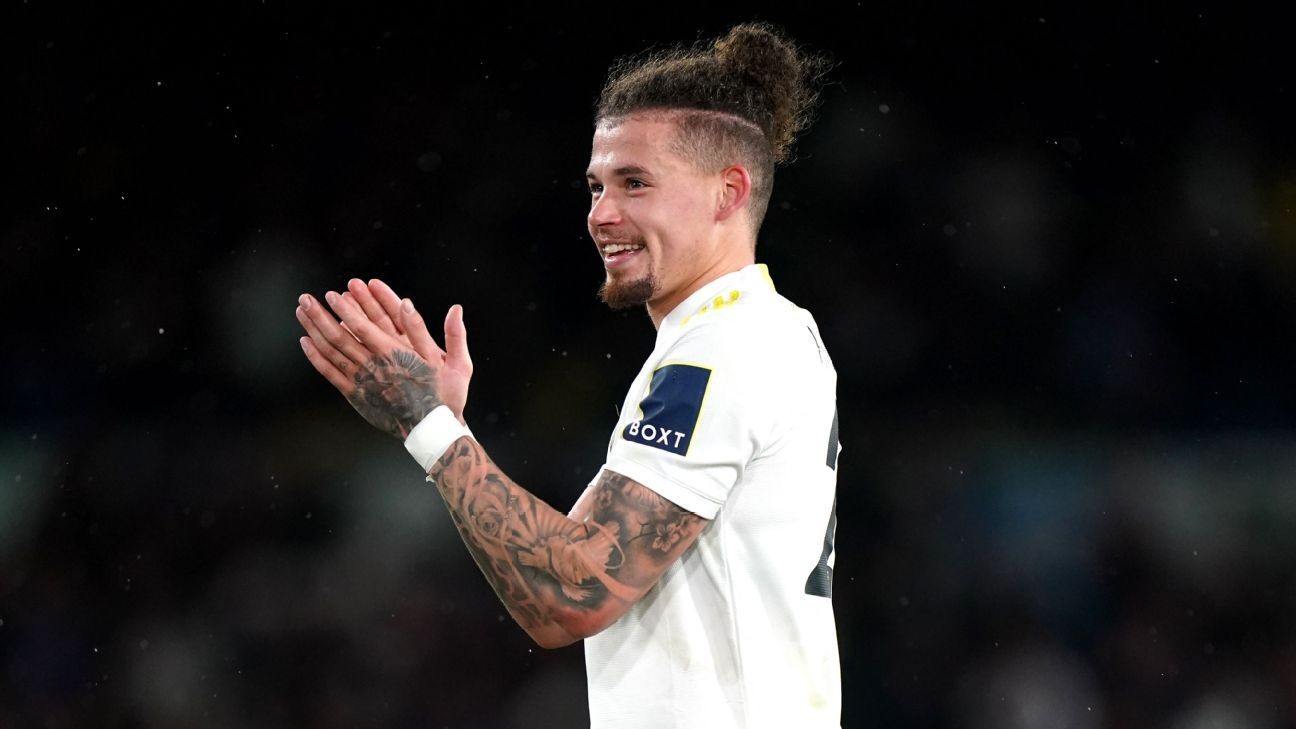 The Sun is reporting that Leeds United star Kalvin Phillips will snub Manchester United in favour of a move to Liverpool next summer.

Messi vs. Ronaldo: Two superstars, two summer moves. How is it going?29dMark Ogden, Julien LaurensMaguire, Coutinho, Van Dijk: How it started, how it's going for soccer's most expensive XI41dMark OgdenThe biggest star every top Premier League team has traded71dTor-Kristian Karlsen

The Red Devils are desperate to strengthen their midfield at the end of the season and, while they may conduct some business in January, their main focus is on Phillips when the current campaign concludes.

Phillips has played a pivotal role in Marcelo Bielsa's ascent to the Premier League, but will reportedly miss the next two months of the season with a hamstring injury.

Phillips' loyalty to Leeds has reportedly made him "wary" of joining rivals United, with Jurgen Klopp being a strong admirer of his work -- especially at Euro 2020 when he played a featured role in England's run to the final.

Kalvin Phillips is reportedly wary of joining Leeds' rivals Man Utd, and would prefer to link up with Jurgen Klopp at Liverpool. Nick Potts/PA ImagesPAPER GOSSIP

- Franck Kessie could leave AC Milan on a free transfer in the wake of Gianluigi Donnarumma doing the same thing, Tuttomercatoweb reports. The renewal of Kessie's contract in Italy is believed to be at a "standstill" with there being a gap between the demands of him and his team, and what Milan are willing to offer.

- Calciomercato is reporting that AC Milan will ramp up their pursuit of Club Brugge star Charles De Ketelaere. The fact that Brugge are officially out of Europe is seen as a huge bonus for Milan, mainly due to the fact that his proposed value of €20 million is set to drop because of it.

- West Ham United are considering a loan move for Daniele Rugani in the January transfer window, Calciomercato reports. Rugani has fallen out of favour with Juventus and, when you combine that with David Moyes' desire to bring in defensive reinforcements, it could turn out to be the perfect fit.

- Jens Stryger Larsen won't be extending his contract with Udinese, as per Nicolo Schira, but he also won't be heading to Roma. The 30-year-old has been in Italy since 2017 and in that time, he's enjoyed a strong run with the club. Now, though, as his Udinese tenure prepares to come to an end, speculation has begun regarding where he'll end up next. Stryger Larsen has hired Hasan Cetinkaya as his new agent as the countdown to his contract expiring in June continues.

- River Plate are set to offer Juan Fernando Quintero a route back to the club, TyC Sports reports. The Colombian had two solid spells with River, one on loan and one permanent, before moving to Shenzhen earlier this year. Now, Quintero is pushing for a return with Shenzhen reportedly owing him a "fortune" in pay.

- Gianluca Di Marzio is reporting that Fiorentina are getting closer to completing the signing of Jonathan Ikone. The €15m agreement between the Italian side and Lille has already been agreed with the two clubs meeting soon to finalise the deal, with negotiations now described as being "safe" heading into the weekend and next month's January window.