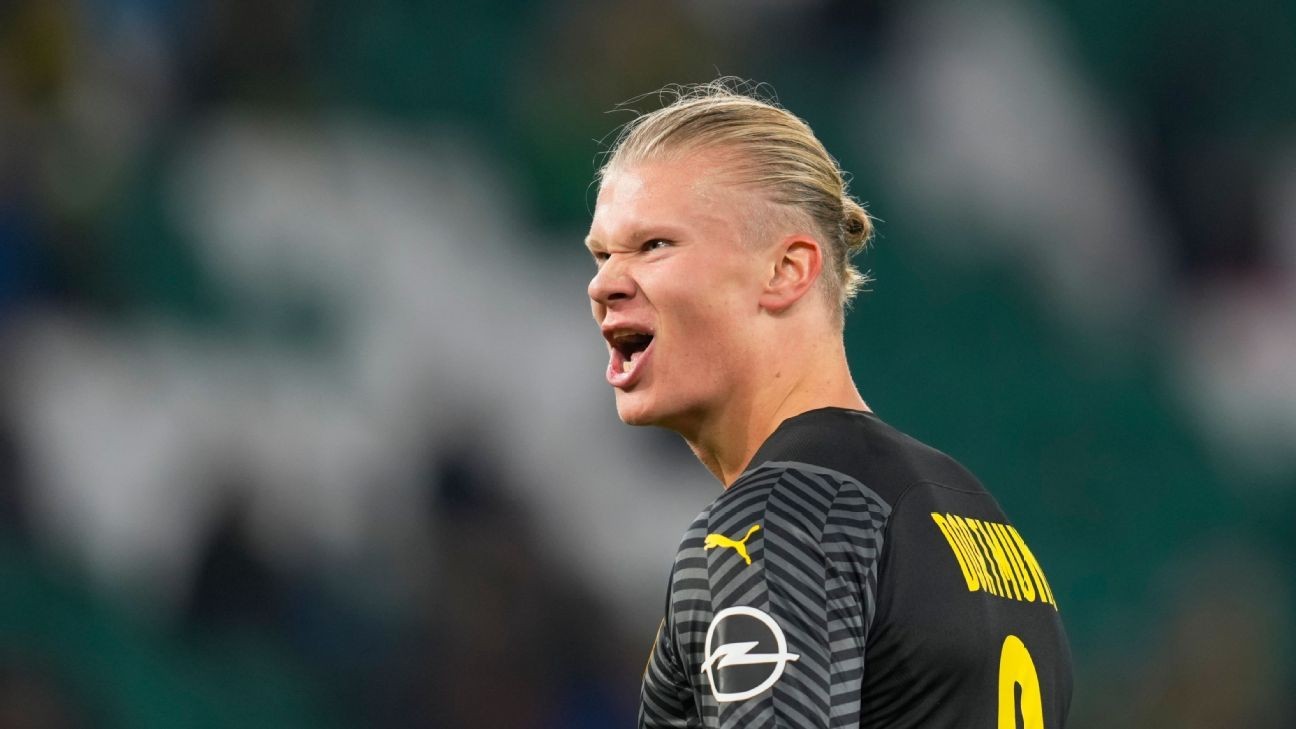 The summer transfer window was unlike any other; see all the major deals and check out how we graded the biggest signings. And just because the window is shut until January, that doesn't mean the rumours won't keep coming. Here's the latest gossip and speculation.

Manchester United are set to utilise Ralf Rangnick's relationship with Borussia Dortmund's Erling Haaland in a bid to tempt him to Old Trafford next summer, the Mirror has revealed.

Messi vs. Ronaldo: Two superstars, two summer moves. How is it going?19dMark Ogden, Julien LaurensMaguire, Coutinho, Van Dijk: How it started, how it's going for soccer's most expensive XI31dMark OgdenThe biggest star every top Premier League team has traded61dTor-Kristian Karlsen

The Red Devils' interim manager previously signed the 21-year-old striker at Salzburg back in 2019 and, with Haaland's €75 million release clause set to become active at the end of the season, the Premier League side will look to use Rangnick's influence to move to the front of the queue for his signature.

Haaland scored on his return from injury on Saturday as Dortmund defeated Wolfsburg 3-1 but, despite reports of the Bundesliga club looking to do all they can to convince him to stay at Westfalenstadion, interest from England's top flight as well as Real Madrid and Paris Saint-Germain could prove too tempting to continue his stay in Germany.

09.00 GMT: Juventus are hoping Jurgen Klopp's admiration for Aaron Ramsey will lead to a bid from Liverpool for the midfielder in January, sources told ESPN's James Olley.

The 30-year-old is under contract until 2023 but Ramsey could be made available for transfer after struggling to break into the first-team since his arrival.

Sources told ESPN that Klopp has long held Ramsey in high regard and considered formalising that interest when the Wales international left Arsenal for Juventus in 2019. Liverpool have been short of numbers in midfield after injuries compounded the departure of Georginio Wijnaldum to Paris Saint-Germain in the summer.

Several Premier League clubs have been linked with Ramsey including West Ham, Crystal Palace, Newcastle and Leicester City and Juventus hope Liverpool will add themselves to that list in the coming weeks, as the Serie A club look for competing clubs to drive the fee up to secure the player.

Ramsey has always been determined to make a success of his time in Serie A but he has made five appearances totalling 112 minutes since Massimiliano Allegri took charge in the summer.

- ESPN's Notebook: The inside stories in football

- Dusan Vlahovic looks destined to leave Fiorentina after telling the board that he has no plans to renew his contract with the club, according to Fabrizio Romano. The 21-year-old forward's goal-scoring form has seen his name linked around Europe's top clubs, but despite new terms being offered to him by the Viola, it now looks as though the Serbia international has set his sights on a move before his contract expires in 2023.

- Nicolo Schira writes that Alexandre Lacazette is preparing to leave Arsenal in the summer. While the 30-year-old forward's contract is set to expire, there has been no progress on a potential extension that would see him remain at the Emirates Stadium. The former Lyon star has started just four games in the Premier League this season, scoring once in the 2-2 draw with Crystal Palace.

- Nimes are prepared to let Zinedine Ferhat go, reports Foot Mercato. The 28-year-old attacking midfielder has been on the radar of a number of clubs from France's top flight of late, with Montpellier one of the sides who could potentially make a move in the January transfer window. It is reported that a fee of around €3.5m will be required to secure his services, with Nimes keen not to lose him on a free transfer in the summer.

- Ekrem Konur reveals that Fenerbahce have identified Isco as a replacement for Mesut Ozil. The 29-year-old midfielder has found himself cast out of Carlo Ancelotti's plans at Real Madrid, starting just two games this season. Meanwhile, Barcelona's rumoured interest in Fenerbahce's talisman has seen the Super Lig side waste no time in looking for a replacement incase Ozil decides to make the switch to Camp Nou.

- Jason Denayer wants to stay at Lyon despite his contract being set to expire next summer. The 26-year-old centre-back has remained a key part of the Ligue 1 club's side since he signed from Manchester City in 2018, and speaking at a press conference on Saturday, as quoted by Le10Sport, he said: "I am still waiting and remain in my position to want to extend. So far, we haven't made much progress, we try to come to common agreements. If we get there, my wish is to stay at the club."