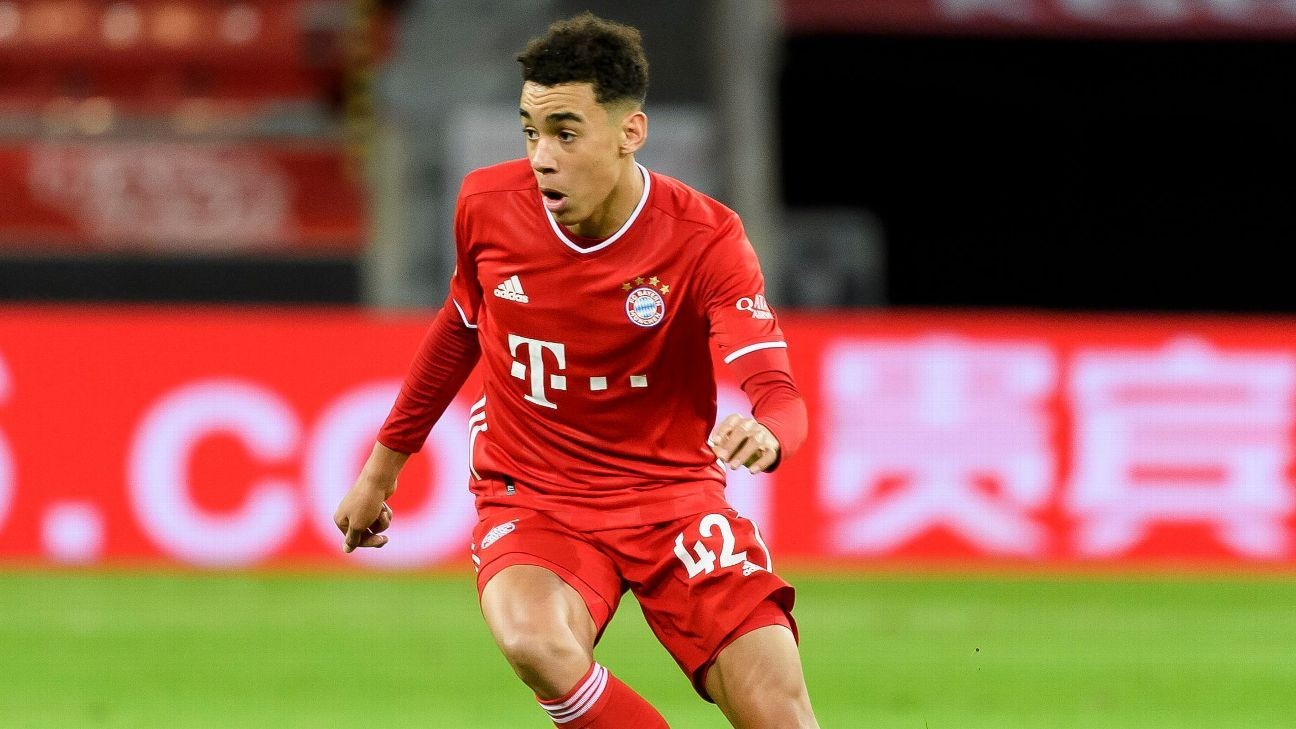 Musiala, 17, signed for Bayern in July 2019 after leaving Chelsea's Academy and has featured for the first team 21 times so far this campaign.

However, the England Under-21 star is in negotiations over a new contract as he's still on a youth wage. Musiala's deal expires in 18 months and he reportedly wants a new one at around €100,000-a-week.

If he can't agree to extend his stay in Munich then Liverpool and Manchester United are interested in signing him, according to the Daily Express.

10.02 GMT: Norway women's international Maria Thorisdottir has joined Manchester United from Chelsea on a deal until the end of the 2022-23 season, the clubs confirmed on Friday. Her contract also has a one-year extension option.

The 27-year-old defender made 49 appearances for Chelsea with her playing time limited due to several injury problems.

"I'm proud to be joining Manchester United; growing up the club was always big in Norway, so for me to now be a part of the women's side is really exciting," she said in a statement. "I've been impressed with the way the team have developed in a short space of time and have heard so many good things about Casey too, so I can't wait to start working with her and the rest of the staff."

Thorisdottir joined Chelsea from Norwegian side Klepp in 2017 and has 46 international caps.

09.52 GMT: Manchester United have rebuffed loan enquiries for Donny van de Beek, sources told ESPN's Rob Dawson, and will look to keep the majority of the squad together this month as manager Ole Gunnar Solskjaer prepares to fight on three fronts -- in the FA Cup, Europa League, and the Premier League -- for silverware.

Van de Beek, who arrived from Ajax for £40m last summer, has started two Premier League games this season, which has lead to talk the midfielder should look to find regular game time elsewhere.

But the Netherlands international, along with defenders Axel Tuanzebe and Brandon Williams, who have also been the target of loan interest, looks set to stay at United because Solskjaer will not throw away the chance to win the FA Cup and Europa League this season while in pursuit of the Premier League title.

09.30 GMT: Frank Lampard's fight to keep his job at Chelsea is being aided over the club's leaders struggling to identify his successor, sources told ESPN's James Olley.

The 42-year-old is under mounting pressure with the Blues 11 points adrift of Premier League leaders Manchester United after winning two of their previous seven Premier League games.

While there is an acknowledgment of the job Lampard did last season in securing a top-four finish despite a FIFA transfer ban and reaching the Champions League round of 16 for the second consecutive year, senior figures at the club expected more this term having spent in excess of £220 million on players last summer.

Chelsea owner Roman Abramovich will decide Lampard's fate, but sources told ESPN that advisors to Abramovich, and director Marina Granovskaia, are torn over who should succeed him.

08.30 GMT: Real Madrid are reluctant to include a buyout option on Martin Odegaard's loan deal to Real Sociedad, according to El Larguero.

The Basque outfit proposed that option which would have Odegaard's blessing, but Madrid are opposed. Madrid are, however, willing to loan the Norwegian midfielder to Real Sociedad until June 2022 but include a clause that could allow them to cut the loan short this summer.

Odegaard, 22, wants to leave Real Madrid in search of playing time to continue to progress in his career He has made nine appearances, five as a starter this season and played just 367 minutes since returning to Madrid last summer after a successful loan season at Sociedad.

Sociedad had wanted to keep Odegaard for the 2020-21 season but Madrid brought the player back with coach Zinedine Zidane keen to have him in the squad. Arsenal have also been linked with a loan move.

Southampton manager Ralph Hasenhuttl is confident that striker Danny Ings will sign a new contract with the club, the Daily Mail reports.

Despite interest from around the Premier League, mainly from Tottenham, as well as reports indicating that Ings wants to move to a club playing Champions League football, Hasenhuttl had the following to say about the Englishman's next move:

"I can only say that we want him to stay here," the German coach said. "We've shown as a club that we want him to be here, definitely, and he's shown signals that he wants to stay with us. So I'm still positive that we're fine together for the future."

Torino are hoping to take Gedson Fernandes on loan from Benfica, Tuttomercato reports.

Fernandes is out on loan in North London with Tottenham Hotspur but hasn't quite been able to strike gold with the club -- with some suggesting he's been one of Spurs' worst signings in recent years.

Torino are hoping to take advantage of that, with the report adding that a deal could be struck in the next few days.

- West Ham United have stepped up their interest in Sevilla forward Youssef En-Nesyri, TalkSPORT reports. Their bid of £27m was rejected last week with Sevilla upping their demands to around £35m, but with the Hammers seemingly unwilling to meet that figure, their search for a new striker goes on.

- Sky Sports is reporting that Burnley have joined the race to sign Bournemouth striker Joshua King. The 29-year-old is out of contract during the summer transfer window, but he could potentially leave this month with the Clarets joining West Ham United and West Bromwich Albion in the race for his signature.

- Calciomercato is reporting that AC Milan are working on a new contract for defender Davide Calabria. His current deal is set to run through the summer of 2022, but as a result of his performances so far this season, Milan are eager to add at least one or two more years to his stay at the San Siro.